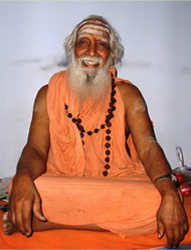 Swami Shantananda Puri Maharaj (1928-2014) was a great saint and a Vedic scholar who lived his life as per the teachings of Sri Adisankara. At his young age, he met Paramacharya of Kanchi, and received blessings from him. And when he was working in the government department, he studied the teachings of Sri Ramakrishna Paramahamsa, and due to that, he was deeply observed in spirituality.

In the year 1957, Swamiji met his Guru Sri Purushottamanada Puri Maharaj, who lived in Himalayas, and got good spiritual knowledge from him. As per the orders of his guru, he has become a householder, and ran his family in a peaceful manner. In the year 1992, Swamiji had become a saint by his Guru Swami Shankarananda at Uttar Kashi.

After becoming a saint, for a few years, he went to lot of Hindu pilgrimage centres such as Belur Mutt, Dakshineswar, Vrindavan, Naimisaranyam etc. Swami had written divine texts, and also gave spiritual discourses on Ramayan, Mahabharat and Bhagavatham. His writings are written in a simple language, and it can be read even by a layman.

He was a scholar and got good knowledge in Vedic scriptures, Shastras, Mantras and Puranas. Swamiji was excellent in reading and writing South Indian languages. In the year 1995, Swamiji went to Ramanasramam and stayed there and meditated for one year. Swamiji used to ask his devotees to absolutely surrender to the Lord.  In the year 2014, Swamiji left his physical body and he was absorbed into the light of Lord Arunachala, and merged with him.