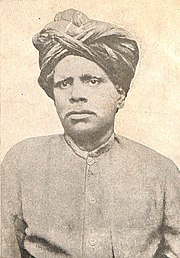 Vaddadi Subbarayudu (1854 – 1938) was a well-known writer in Telugu language. Subbarayudu was born in the year 1854 to a poor Brahmin family in the East Godavari district of India. His father was a great scholar and teacher, and he learnt the basic education and the holy Hindu texts like Bhagavatham and Bhagavat Gita from his father.

He translated the bhajagovindam from Sanskrit to Telugu, and also similarly he had translated famous holy texts written in Sanskrit language into Telugu. Due to his interest in his mother tongue Telugu, he served as a Telugu teacher in schools and colleges. He was awarded and honoured for his rich contribution in Telugu language.

He wants everyone to live comfortably and peacefully without having any financial problems in their life. His poems were written in simple language, and he wrote lot of Bhakti songs and sung in praise of Lord Krishna.

He died in the year 1938, but he is still living with us through his famous poems.

Let us praise the great poet.