In: Warrior
With: 0 Comments 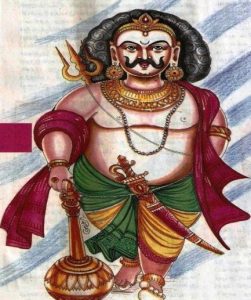 INTRODUCTION
Ghatotkacha is an important character in the Mahabharata. Ghatotkacha was the son of Bhima and Hidimbi.
IMPORTANCE
Ghatotkacha was a gigantic and powerful person with great strength, and he possessed a good knowledge of magic. Ghatotkacha fought and killed many demons. He can win anyone and contains the strength equivalent to that of several thousands of elephants and lions.
Kurukshetra
During the Kurukshetra war, Ghatotkacha fought in favor of Pandavas. He used his magical powers and created great damage to the Kaurava’s army.
A great fight took place between Karna and Ghatotkacha. Karna invoked the celestial weapon given by Lord Indra towards Ghatotkacha and killed him.

Temples
1.Ghatotkacha Temple in Champawat, Uttrakhand
2.Ghatotkacha Temple in Manali, Himachal Pradesh.
CONCLUSION
A great son of Bhima, and also a great warrior who fought in favor of Pandavas, and left his life for them, and also a fearless person. Though he possessed all the abilities, he was killed by Karna using a powerful weapon. After his death, he went to heaven.

Let us pray to the great Ghatotkacha and get the blessings from him.
“OM SREE GHATOTKACHAYA NAMAHA”
WRITTEN BY
R.HARISHANKAR