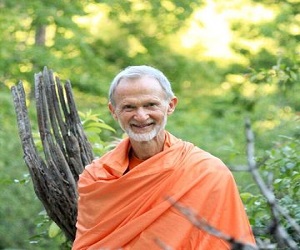 Swami Ravi, also known as Swami Ravi Rudra Bharati, was serving as a professor of psychiatry in New Orleans till 1973. Afterwards he went to India, and he met his Guru. His birth name was Rudolph Ballentine, and due to his spiritual interest, he has become a saint and a yoga guru.

He trained in Ayurveda field, and also learned yoga and meditation under his spiritual guru. Through his guru’s guidance, he established yoga therapy centres and Ayurveda medical centres and also founded various dance coaching institutes in foreign countries. He is an ardent devotee of Lord Shiva, and visited various Shiva temples in abroad.

His famous work was Radical Healing, which explains various ways of                          healing human diseases through Ayurveda medicines and Yoga therapies. He had undergone training under Swami Rama, and learnt various spiritual aspects from him. He has become a saint in the year 2016, and at present he teaches yoga and meditation at the Dancing Shiva Yoga and Retreat Centre, Black Mountain.