The term ‘ginger’ has been derived from the Latin term ‘zingiberi’ and Greek ‘zingiberis’ which in turn have been derived from the Sanskrit term ‘singabera’. This etymological fact is also mentioned in the Oxford dictionary, where ‘sringam’ is spelt as ‘singabera’ meaning horn; the branched shape horn of ginger root resembling to that of an antler is the reason behind the name, as cited in the Oxford Dictionary. The scientific name of ginger is ‘Zingiber officinale Roscoe’.

The ancient Indian name of ginger is ‘aardrakam’ that refers to a fresh ginger; ‘adrak’ is the Hindi term of ginger. Similarly, ‘sunthi’ is the ancient name of dry ginger powder; ‘sunth’ is the Indian term of the same. Ardraka-Madya and Panam-Madya are the ancient names of ginger meaning ginger-ale and ginger-alcohol respectively.

What is Ginger called in Various Indian Languages?

Ginger, in different languages is as follows –

Ginger is a tuberous horizontal perennial plant which is quite large in size having distinctive knots. Generally, a ginger plant stretches itself till around 90 cm up from the ground; the leaves are 15-30 cm in length and 2-3 cm in breadth. The stems which are branched in the underground are called rhizomes. Typical characteristics of the rhizomes are as follows –

Origins of the Spice

Ginger plant and its usage have Asian origins and it bears great culinary and remedial significance. Although it has Indian origins, later it was introduced in China and since then both the nations have been utilizing ginger rhizomes as a popular spice and medicine. Sanskrit literature has innumerable references to ginger and it is believed that from here it later reached various European, Arabian and other nations of the world.

Since Vedic times the usage of ginger is widely prevalent and ginger has been given the stature of Maha-Aushadi i.e. the great medicine. In Ayurvedic terms, ginger reduces Vata and Kapha. It controls cough, cold and common flu. For cough and swellings, doctors recommend ginger along with honey. Consumption of ginger is beneficial for mind as it is sattvic in nature. Application of ginger paste on head during headache and on joint pains (rheumatism) gives magical results. A number of other diseases can be cured with the intake of this Maha-Aushadi including chest congestion, diarrhoea, cholera, stomachache, nervous diseases, vomiting, and nausea. Sage Vatsyayana, the renowned Indian author of Kama Sutra, has also recommended ginger as an aphrodisiac. Ayurvedic physicians also recommend ginger to pregnant woman to gain short term relief form vomiting tendency or nausea. In rare cases, powdered ginger may lead to certain types of heartburn or nausea.

In Ayurveda both fresh (wet) ginger and dry ginger are used as medicinal components in preparations like powders, decoctions, etc. On the basis of Ayurvedic chemistry the properties and actions of dry ginger (sunthi or sunth) are discussed as follows – 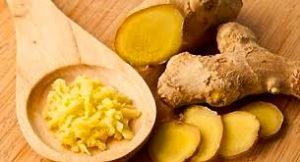 Vata-Pita-Kapha – The Actions of Three Doshas on Ginger

The properties of ginger are contrary to the aggressive properties of Vata and Kapha. Vata is said to upset the digestive tracts; ginger has the properties to combat excess Vata present in the gastrointestinal tract and normalize the digestive functions. Stomach diseases, intestinal disorders and many secondary manifested conditions (owing to slothful stomach and lower stomach metabolism rate) can be cured with the adequate usage of ginger as part of ayurvedic medicines.

Actually, the concept of balanced metabolism has been explained well in the Ayurvedic literature. As explained, the upper gut (stomach) is the fire zone (extremely hot) and for rhythmic life activities the heat in the fire zone needs to be preserved. The disproportionate Vata or Kapha (cold elements) always stands as a threat for the fire elements in the gut. Dry ginger has the quality of refurbishing the balance in the fire zone, bringing back the right metabolism. The post metabolism conversion, the hot and pungent taste of dry ginger into a sweeter one simply checks and regulates the hot nature of Pita.

Ginger components, coming in direct contact with the stomach and tissues generates lubrication owing to the natural unctuousness in ginger.  The hot and protective nature of ginger protects the interior of the body. The unctuous element also helps in checking degeneration and dry Vayu efficiently. By rekindling (oiling) fire in the stomach, ginger also helps in proper digestion. Dry ginger engenders the functional integrity of the three elements – fire, air, and water – required for metabolism and gut digestion at initial levels. Again, the functionality of the three elements are separately described as follows –

Major health benefits of ginger are –

Basically, there are two types of gingers, young (fresh) and mature (old). Mature ginger has tough skin which requires peeling. Fresh gingers, generally found in the Asian markets, have softer skin that doesn’t require peeling. It is always advisable to buy fresh gingers rather than the older ones. Fresh ginger is always superior in flavour with higher levels of gingerol and active protease. Fresh gingers are smooth, quite firm and easily mouldable. The shelf life of a fresh unpeeled ginger in a refrigerator is around three weeks; while in a freezer is around six months.

While buying ginger powder, it is always advisable to buy powder which is prepared from organically grown ginger. Ginger powder is stored in tightly sealed container of glass; when stored in a refrigerator it lasts till a year. Besides in powder form, gingers are consumed in many other forms, including candied, crystallized and pickled ginger.

References
Published On: 21-10-2014
(Others):
http://www.hindubooks.org/sudheer_birodkar/india_contribution/prod.html
http://www.onlineremedies.in/2014/02/ginger.html
Properties and mode of action of Dry Ginger: An Ayurvedic perspective