In: Arts, Dance
With: 0 Comments

The beautiful and incredible North Eastern state of India, Manipur is located in the hills and region of cold temperature. Just like everything else in the state beautifully adorned by nature and their vivacious culture, the folk dance forms are as beautiful as their history and people. The city is famous for its style of Krishna Ras Leela which depicts the history of Lord Krishna’s pure love for Radha and vice-versa. To certain dance forms and maintaining the originality, the Manipur dance forms are inclined to entertain, educate and recite the history with its several acts included in each dance form. Many dance forms are gender-specific where one gets the chance to show his skills in dance form and also to entertain. With the help of many musical instruments like Dhob and Napi Pala are the popular styles accompanying with other types that are tribe specific or society definite. The folk music in this region serves the soul purpose and describes their culture well.

1. Manipuri:
One of the most known classical dance forms, Manipuri in Manipur’s most enlightened dance form. Connected to the existence this dance form is aimed to give one a spiritual experience, while performance is as beautiful as a bliss. Purely focusing on their religion and culture, people of Manipur are working on developing their dance and music every day. For them, dance is not just a medium of performing arts, but also expresses their sovereignty, affection towards their culture and growth of their individual through history. Manipuri dance style expresses and indulges the individual with soft and graceful movements. It is strong and delicate at the same time. Manipuri dance form is very much living the culture and tradition of North East India, where the glimpse of a rare and ancient civilization still extant. This dance style is vigorously cultivated with soft, feminine and strong masculine characters. Each act comes out with rhythm and soul of the performer. According to the inscription, Lord Shiva and his companion, Parvati danced in the valleys of Manipuri to the attribute of the Gandharvas to the celestial light of Mani (jewel) from the head of the Atishesha, a serpent and that is how it has come to be called Manipuri.

2. Nupa:
Another incredible dance of Manipur, an adjacent repercussion of Manipur Dance style. Usually, performed by male performers using cymbals and wearing white Pheijom (Dhoti) and spherical turbans, who sing and dance to the rhythm of Pung (Mridanga). Manipuris are fond of art, love, and passion which reflects in their dance and music. The varieties bring up together several masses. It is a beautiful reminiscence of cultural ethnicity and vivacity.

3. Pung Cholam:
The dance form performed with the Mrindanga and Dholak by the male performers. The enthusiast and dramatic illusion with different narratives performed only by male characters in duos, or a group of people. Generally, these are related to Religious and Hindu festivals. When it is a part of Nata, two players participate in its performance, but as an independent dance performance at least 14 players follow the sequence of Nata Sankirtan. In this series with more than 40 complicated talas and sanchars that represents particular compositions of rhythms are presented. The whole festival and number of people can be increased as per necessity. Creating an ambience of different voices, like birds, animals and threatening environment, it is performed like a play.

3. Khamba Thoibi:
It is a duet of male and female dancers performed traditionally in the state of Manipur. This dance typically represents the Tandava and Lsya aspects of Laiharouba movements. It is traditional folklore depicting a historical love story of a couple, which now is celebrated as a dance form. In the form of tradition, art and music people of Manipur try to maintain the peace and culture of the city which is a necessity of this time now.

4. Dhol Cholam:
Again, it is a dance in Manipur performed with the instrument Dhol and varieties of it. A couple of men dances in circular and strong movements with Dhol and swords in their hands. Of course, some historical significance presented with joy and the enthusiast of the people of Manipur. According to the epics, this is evolved from some ancient martial arts performed by the royal kings and families of Manipur. An exciting performance presented by the young men of the village of the city is a pure form of excitement and youthful events.

5. Manipuri Ras Leela:
The Rasa Leela is the legendary dance of Manipuri history entreating deep feelings of people. The dance illuminates an endless love of Radha and Krishna as being defined in the Hindu scriptures & Puranas. Also reveals the breathtaking love of Lord Krishna and Radha including the commitment of Gopies towards the Lord.

In its concrete object, Manipuri Rasa Leela strikingly represents the association of the individual soul with the spirit of the Supreme Being, if true faith is revealed. The Gopikas interpret individual souls circumscribed to worldly constraints. The Godhead represents by Lord Krishna, is protruded through the call of his enchanting flute.

With an enduring bond of love, they slink out of their existence of the human body, but get combined with each other with the soul. Consequently, it is a description of the prominence of an interconnection of the human souls with the Supreme Being. In an actual dance performance, the eye-catching contemporary movements and graceful gestures can be seen. During the performance, these inclinations are very much controlled, that it procures a touch of spiritual vitality.

Conclusion:
As described the city of joy, passion, and hard work, Manipur is still as ancient as it was and more beautiful with the existence of a combination of ancient and modern art. Emotions and celebrations, sending and expressing through different types of dance forms and experiencing some kind of divine power, Manipur culture is more authentic than it seems. With exciting and colorful reoccurring activities involves a lot of dancing and performing arts, India has gems in the form of diversity and state like Manipur. 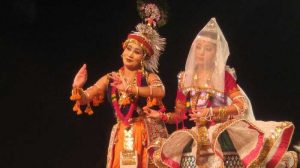 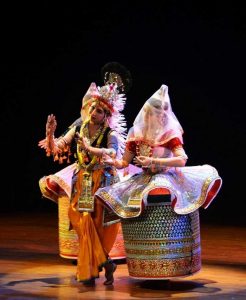 2019-07-04
Previous Post: One God or Many Gods
Next Post: Hindus worldwide shocked at vandalizing of Hindu temple near Birmingham