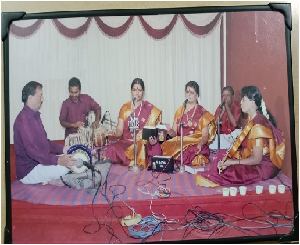 Mrs.R.Jayanthi is doing divine music concerts in the Devasthanam temples as well as in other temples of Karnataka, Kerala and Tamil Nadu for the past 30 years. She also performed music concerts in marriage receptions, Tourism Development programme at Kanyakumari, conferences, clubs, college functions, Tamil Isai Sangam, and in Sadguru Sangeetha Samajam, Madurai.

She is an expert in Carnatic Music, and used to sing Bhakti songs, Classical songs, Bharatiyar and Bharatidasan songs and also she used to sing Light Music songs from Tamil feature films. She is fluent in Tamil and she would conduct the music programme according to the interest and tastes of the viewers, and due to that she was highly appreciated by them.

In recognition to her talents in Music field, the Madurai Tamil Sangam had awarded her a Certificate and also granted her gold coins tied in a piece of cloth, which is called as ‘PORKIZHI’ in Tamil. ‘PORKIZHI’ was awarded to the ancient poets by the kings, in appreciation of their expertise in penning bhakti poems. Similar to the great poets, Mrs.Jayanthi was also given the high recognition, due to her dedication and bhakti on the almighty.

She has studied upper level in Music field, and now she is singing Bhakti songs in Madurai Radio Station. She is also an expert in writing devotional songs on the almighty. She used to sing songs on Tamil, Kannada, Telugu, Malayalam, Marathi, Hindi and Abang. Her shows are telecasted in Pothigai, Raj TV, Vijay TV, SunTV and also in other Private Television Channels. Mrs.Jayanthi is performing music concerts along with her daughter Selvi.Boomija Ramaiyer and with her sister and brother. Due to that, her Music Group is fondly called by the music lovers as “AFFECTIONATE FAMILY MEMBERS MUSIC GROUP”, and in addition to that, the Tamil daily newspaper Dinamalar also published about the details of Mrs.Jayanthi’s Music Group, and well appreciated her talents.

The details about the Music group members are:

She is conducting Vocal Music and Sloka classes at her home in Madurai. Mrs.Jayanthi can be contacted in her Mobile No.9486116043.

Let us appreciate the sincere efforts of Mrs.Jayanthi with regard to her dedication in the field of Music, and let us pray to the almighty to give a healthy, wealthy and a long life to her, and to her family members.