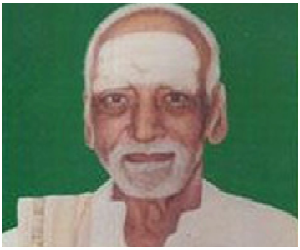 Paapanaasam Sivan (1890-1973) was a famous Carnatic musician and singer. He got various Musical awards and also participated in the film industry.

His songs were become very famous after the songs were sung by M. K. Thyagaraja Bhagavathar and M. S. Subbulakshmi in Tamil feature films.

He was born at a village in Thanjavur, and his birth name was Ramaiya. After the death of his father, his mother moved to Kerala and took shelter under her brother. At Kerala, Ramaiya completed graduation.

Ramaiya lost his mother at his teenage, and he began to visit various temples by singing wonderful devotional songs in praise of the deities. Ramaiya learned music under his Guru Sri Neelakandasivan. During his visit to temples, he stayed for a long time at a temple at Papanasam, and hence he began to be called as Papanasam Sivan.

Sivan was married to a pious lady, and they had five children. He was a soft spoken and a good natured person, and he brought up all of his children in a proper manner.

His contributions to the following films added a great applause among the audiences due to his mesmerising music.

Ancient musicians have dedicated their life for the sake of spreading spirituality amongst the people. They lived a simple life, but lived their life peacefully. Similar to Sri Thyagaraja, Papanasam Sivan also lived a noble life, and spent his period, by singing songs and composing music. Still he is living through his songs, and still now his songs can be heard in Music Players, in most of the homes of Carnatic Musicians.