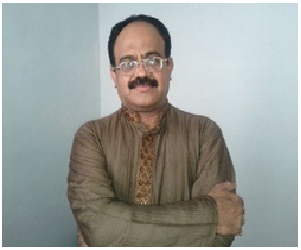 Sri Puttur Narasimha Nayak is a popular Kannada  singer from Karnataka.  He has sung lot of devotional songs, mainly songs related to saints like Purandara dasa and Kanaka Dasa, and he is a sincere devotee of Guru Raghavendra. His songs attract large number of people across the world.  His Music albums are very popular among the Madhwa community people.

Nayak was born in a Brahmin family, and at his young age itself he learned music from a good scholar.  He has also sung some songs for Kannada films.  He won the Karnataka Awards for his talent in music.  He knows many languages, he   belongs to Dakshina Kannada district, and he lives with his family in Bangalore. He has performed lot of musical concerts in India and in abroad.

Some of his songs are as follows:

Most of his songs would be played in speakers at various branches of Raghavendra Mutts. Among his songs, Madhwanama is a popular song, and it would be mostly played in the houses of the Madhwa community people, and in the Raghavendra Mutts, especially during Madhwa Namavi festival day. His melodious voice was loved by many of the Raghavendra Devotees, and they used to listen to his songs during Thursdays and during their leisure hours.

In general, listening divine songs would heal our mental worries to some extent, and would avoid us in doing bad activities. It also strengthens our mind, and would inculcate the bhakti in our mind.