In: Music
With: 0 Comments 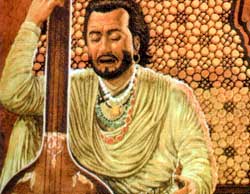 INTRODUCTION
Tansen (1500–1586), also known as Ramtanu, was an important person in Hindustani classical music. He used to burn the temple lamps automatically, by singing melodious songs using Deepak raga, and also he brought rain after singing the glories of the rain gods, Lord Varuna and Lord Indra. He was born in a Hindu family, and he learned various subjects in the present day Madhya Pradesh. He was the musician in the court of the Hindu king Sri Raja Ramchandra Singh and he used to mesmerize the court with his great musical talents.
After some time, due to his name and fame, he has joined in the court of the Mughal Emperor Akbar and rendered a marvellous musical performance. Once, he also removed the sickness of King Akbar by singing a melodious song on Lord Shiva.
Akbar considered him as a GEM and a Divine Musical Composer. His music was widely appreciated by the people and he was praised for his great talents.
He sang songs in praise of Lord Vinayaka, Vishnu, Shiva and other Hindu deities. It is believed that once, he has got the divine appearance of Narada and Tumburu and received blessings from them, and through that he has become more skilled in his field.
He also written various slokas in praise of gods, and was a sincere devotee of Lord Sri Rama. After getting married with Akbar’s daughter, he has embraced Islam. And though he has converted into a Muslim, he maintained his bhakti on Hindu gods, and used to frequently sing songs on them.
Let us worship the great musician Tansen and be blessed.
“OM SRI TANSEN MAHAPRABHU NAMAHA”
“JAI SRI RAM”
“OM NAMAH SHIVAYA”
WRITTEN BY
R.HARISHANKAR