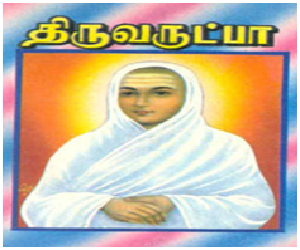 Thiruvarutpa is a collection of few thousands of sweet songs which was sung by Vallalar. He is considered to be an incarnation of the great siddhar and the Shaivite saint Sri Thirumoola Nayanar. These songs contain the significance of Lord Shiva, about doing food donation and about non-violence. The followers of Vallalar have collected the details of Thiruvarupta and also published it in the form of a book.

Some of the verses from his Thiruvarupta are as follows:

His Thiruvarupta is highly praised by the ancient scholars and by the present day Tamil Scholars. Ramalinga Adigal lived a simple and saintly life and consumed only pure vegetarian food throughout in his life. By studying the holy Tamil Text, Thiruvarupta, we would get the grace of Lord Shiva, and we would get sufficient knowledge in all the subjects.