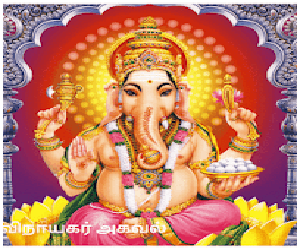 Vinayagar Agaval is a devotional poem written in praise of Lord Vinayaka, by the great saint-poet Avvaiyar, and it was widely praised by the Chola Kings. Vinayagar Agaval promotes Bhakti, and gives happiness to the readers of the divine poem.  The meaning of the famous poem is: Lord Vinayaka is having the Lotus feet, and his feet are decorated by golden anklets, he happily sings songs, and he is wearing the golden belt in his waist and his clothes looks very soft, pure and clean, and looks like a freshly plucked flower, and he shines like a beautiful rainbow.

According to legend, Avvaiyar was a devotee of Lord Vinayaga from her childhood itself. When she attained young age, her parents decided to perform marriage to her. On knowing about this, she immediately prayed to Lord Vinayaga, and due the grace of Vinayaga, she has become an old aged woman, and wrote the famous poem “SRI VINAYAGAR AGAVAL”.

After that, she began to travel to different places, and promoted the “SRI VINAYAGA BHAKTI” amongst the people. Once, she also reached Kailasa due to the grace of Lord Vinayaka, and had the darshan of Parvati and Parameshwar. At this current situation, it is suggested to daily read the Vinayagar Agaval in order to get good health, sufficient wealth and happiness in our life.