Asoka tree is one of the trees having cultural and religious significance in India. Ashoka or Asoka is a Sanskrit word which means “without sorrow” or that which “gives no grief”. The Asoka tree is known by other names such as Sita Asoka in Hindi, sorrow less tree and tree of love. The other names of the tree are: Anganapriya, Ashopalava, Asupala, Apashaka, Hemapushpa, Kankeli, Madhupushpa, Pindapushpa, Pindipushpa, Vanjula, Vishoka, (Asokamu, Vanjulam) in Telugu, and Achenge, Akshth, Kenkallimara in Kannada.

The scientific name of Asoka tree is Saraca Asoca. The plant belongs to the family of Caesalpinioideae, subfamily of the legume family. 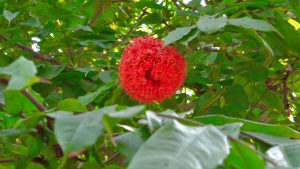 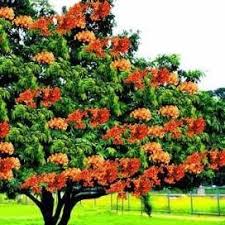 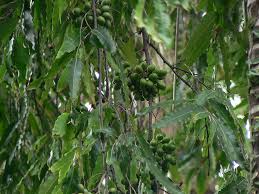 Asoka tree was originally grown in the central areas of Deccan plateau and in the Western Ghats.  It is widely cultivated in the foothills of Himalayas, northern plains, Bengal and the Deccan plateau in South. The tree grows well in tropical and sub tropical regions. It requires slightly acidic and neutral soil for good growth. Asoka is a slow growing, small, erect, ever green tree which grows to a height of up to 6-9 meters.

The leaves are copper brown in colour when tender and as the leaf grows, the colour turns to light green and finally to shiny deep green in colour. The leaves grow in clusters up to 15- 25 cms in length. The leaves are lance shaped and the edges appear wavy. The leaves are used in decorating the entrances of temples or for other ornamental decoration purposes.

Asoka flowers bloom during the months of February to May. The flowers which are small bloom in large clusters. They have long tubes that open out into four oval lobes. The lobes also look like the petals of the flower. The flowers are not only beautiful but also produce a sweet aroma. The colours of the flower changes from yellow when tender to orange and then to crimson as the rays of sun fall on the flower and before they wither. In the spring season, the tree is covered with numerous flowers, green in colour. But they last for two – three weeks time hence are not very obvious as the colour of the flower matches with that of the leaves. The fruits are about 6-10 inches long looks similar to broad beans containing 6-8 grey colour seeds.

There are two varieties of Asoka tree

It is the Asoka or the Sarcosa which is used in Ayurvedic preparations. It grows large and is highly spreading or bushy. It has a thick bark. Asoka fruit resembles broad beans containing multiple seeds. Asoka tree is becoming extinct in India. It is mostly planted near royal palaces, temples or Buddhist monasteries.

This tree resembles the Sarcosa tree closely, but can be distinguished by its compound leaves and different flowers. The scientific name is Polyalithia longifolia. False Asoka is also known as the Indian Mast tree, the Buddha Tree, and the Indian Fir tree. It grows densely and tall up to 30 meters in height, without branches. Flowers are apple green in colour. False Asoka tree has a single fruit. It is widely planted in India as it is said to be effective in combating the noise pollution. The False Asoka tree’s bark is used in making the mast for the ships, which is the reason for the tree to be known as the Indian Mast tree

In Vishnu Purana, there is a mention of Asoka Vatika, garden in Ravana’s palace premises. It was in the Asoka Vana that Mandodari, queen of Ravana came to meet Sita Mata and it is also the place where Hanuman first meets Sita Mata.

In Ramayana, there is a mention of Asoka tree where Sita Devi, wife of Lord Rama took shelter in Lanka, when in the captivity of Ravana. The tree is slightly said to have bent, to not only provide shelter to Sita Mata, but to also show its respect to Her.

Lord Mahavira renounced this world sitting under the Asoka tree in Vaishali.

Lord Buddha was born under the Asoka tree.

The tree is dedicated to Kamadeva, the God of Love.  The tree is a symbol of love, as the lord is said to have used the Asoka flowers as one of the five flowers in his quiver.

The tree is associated with Yakshi, a mythological being (spirits who are the custodians of treasure hidden in earth and in the root of the trees) usually seen at the entrance of temples or Buddhist monasteries. Yakshi is sculpted as having her one foot on the trunk of the Asoka tree and her hand holding the branch of a flowering trunk.

The seeds, bark, roots and the flowers have medicinal properties. In Charaka Samhita, Asoka herb is mentioned in the treatment of uterus related ailments. Asoka tree is said to contain haematoxylin, tannin, iron, catechol, silica, potassium, magnesium, calcium, glycoside and many more.

In Ayurveda, the uses of Asoka tree are as follows:

Vedana sthapana- Effective in management of all painful conditions

Trishanashnam: Eases the burning sensation in the body

Shothajit- Effective in management of all oedematous conditions

Apachijit- Used in management of inflammation of lymph nodes.

Asoka is an astringent and analgesic agent. Astringent property is used to treat womb problems along with other medicine. It is highly effective in stimulating the uterus, the endometrial and the ovarian tissues. It is effective in treating uterine bleeding associated with fibroids, leucorrhoea and menstrual disturbances.

The herb has a nourishing effect on the circulatory system, which makes it useful in treating arrhythmia (irregular beating of the heart). It is a natural blood purifier and helps in preventing skin allergies.

The herb is used as a natural diuretic. It is effective in treating conditions causing painful urination.

Bark of the tree

The bark of the tree is brown in colour. The tree’s dried bark contains tannins, sterol, catechol, and other organic calcium compounds. The powdered bark also contains Aluminium, strontium, calcium, iron, magnesium, phosphate, potassium, sodium, and silica.  The bark of the tree is used to treat uterine disorders. Dried bark as well as the flower is used in treating uterine disorders. The stem bark is highly effective in treating all disorders associated with the menstrual cycle including menorrhagia. The dried bark powder must be preserved in an air tight container, away from light and moisture.

The bark of the tree is used in treating scorpion stings. The dried bark powder can be mixed with honey and consumed for keeping women related problems at bay.

Piles: For internal treatment of piles, 90 grams of the bark when boiled in 360 ml of milk, until reduced to 90 ml should be consumed daily twice or thrice.

Asoka leaves, flower and bark has antibacterial properties which are used in treating bacterial infection.

Roots: Paste of roots is useful in treating external inflammation, ulcers and skin diseases. It is also effective in treating itching in case of eczema, psoriasis, dermatitis and hyper kushta/visarpa. Dried root is used in treating paralysis, hemiplegic and visceral numbness. The root paste can be used as cream or as a face wash. It rejunuvates the skin tone and improves the complexion. Decoction of roots is useful in rickets, delayed bone consolidation and calcium deficiency.

Seeds: Seeds and ash of the tree are used in the external application for rheumathritis. Seed and pod contains oleic, linoleic, palmitic and stearic acids, catechol, epicatechol and leucocyanidin.

The tree is considered sacred in India, Nepal and Sri Lanka.

Women pray to the tree on the 1st day of Chaitra Shukla Padyami (1st of the New Year of Hindu Calendar, March- April).

Asoka Shashti is observed in Bengal, when women eat flower buds to guard their children from grief and sorrow.

Consumption of water in which the flowers are washed are said to have a positive/calming effect on the mind. The beautiful flowers are said to bring joy, thereby removing pain and sorrow.

Women in Chhattisgarh boil the bark in cow’s milk, add sugar and consume it once in a day for three days and repeat it after three months to prevent gynaecological problems.

The Asoka tree where Sita Mata took shelter is located in Hakgala Botancial garden, the area is known as Seetha Eliya, close to the city of Nuwara Eliya in Lanka.