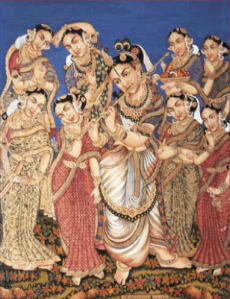 Ashtabharyas are the eight chief consorts of Lord Krishna, during the previous Dwapara Yuga, and their names are: Rukmini, Satyabhama, Jambavati, Kalindi, Mitravinda, Nagnajiti, Bhadra and Lakshmana. Among his eight main consorts, Ma Rukmini is considered as an incarnation of Lakshmi Devi, and Ma Satyabhama is considered as an incarnation of Ma Bhumi Devi.

Ashtabharyas were mentioned as very beautiful and holy consorts of Lord Krishna, and due to their chastity and adjustability, they have become affectionate consorts of Lord Krishna. Krishna considered all of his queens in a similar manner, without showing any partiality between them. He also used to share his nice teachings with his consorts, and he had asked them to live a disciplined life. Lord Krishna had safeguarded his wives properly, and built separate palaces for each of them.

Once Narada visited Dwaraka, in order to find out how the Lord is living with his several wives in a single body. To his great surprise, when he visited the various palaces of Lord Krishna, he found that Lord Krishna takes different forms, and he lived in those palaces along with his consorts happily. He also invited Narada to his palaces, and in all the palaces, he found the presence of Lord Krishna.

The details about Ashtabharyas were mentioned in Srimad Bhagavatham, and those who read about the details of the wives of Lord Krishna would be blessed by Lord Krishna, and they would get peace of mind, happiness and all other prosperity in their life.