Champaka known as Champa in Hindi and Sanskrit is a flower known for its fragrance. The scientific names are: Mangolia champaca or Michelia Champaca. The name Michelia is a tribute to Florentine Botanist Pietro Antonio Micheli. It belongs to the family of Magnoliaceae.

It is known as the Joy perfume tree or yellow jade orchid tree in English. The other names of Champaka are : Tita- sopa in Assamese, Champa in Bengali, Sachochampo in Gujarati, Sampige in Kannada, Pudchampo in Konkani, Leihao in Manipuri, Chompa in Oriya, Pivalu Champa in Nepali, Sambagan in Tamil, Champangi in Telegu and Champa in Urdu. The synonyms of champaka are: Michelia rheedei, Champaca michelia.

Champaka is a medium- large, tropical ever green tree that grows to a height of 50 feet or above. The bark is grey in colour and smooth. The shoots, young petioles (the stock attaching the leaf blade) and the leaf blades are pale yellow and silky. Leaves are ovate.  Flowers are long, inverted, lance shaped with thin petals. The flowers have a long protruding tip. Flowers are found in white, yellow or orange colours. The flowering season is from May- December. The fruits of the tree grow in clusters, appear like grapes, contain capsule like 1-2 seeds, brown in colour. The tree is grown usually in temple premises. The tree is grown from stem propagation and seeds.

The tree is a native of South Asia, found predominantly in India, Burma, Thailand, Indonesia, Malaysia and Philippines.  The tree is cultivated for its flowers and ornamental use. The tree is found in the Himalayas, North East India, Western Ghats and South India. 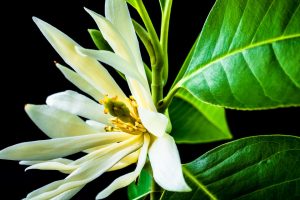 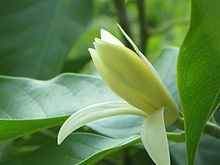 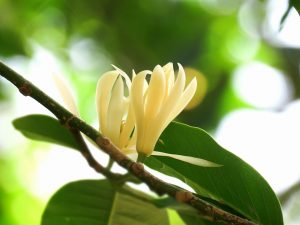 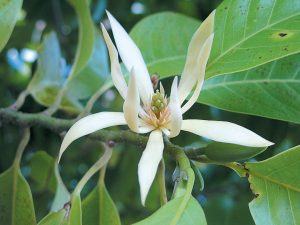 Sage Narada was on his way to the Shiva temple in Gokarna, in Karnataka, when he was drawn to the smell of Champaka flowers near the temple. He stood below the tree and was enjoying the sweet fragrance of the flowers. He then saw a Brahmin priest nearby the Champka tree.  He had come to pluck the flowers, but on seeing Narada, refrained from plucking the flowers. When Sage Narada enquired with the Brahmin, he told that he was from a nearby village and while he was passing by, he was drawn to the tree by its smell and was thus enjoying the smell of the flowers. Sage Narada then left for the temple. When Narada had left, the Brahmin plucked the flowers and hid in a basket. When sage Narada returned from the temple, he met the Brahmin again.  When Narada enquired with him, he said that he was going home. Narada became suspicious about the Brahmin’s behaviour and asked the Champaka tree if anyone had plucked the flowers, to which the tree replied in negative. Not convinced with the answer, sage Narada went back to the temple and was astonished to find the Shiva Linga covered with Champaka flowers. Sage Narada asked a man who was sitting nearby, as to who had offered the Champaka flowers to the Lord. The man said that a Brahmin offers the flowers daily to the Lord. Lord Shiva was immensely pleased with the Brahmin and had showered him with His blessings. The Brahmin had become all powerful in the King’s court and was harassing poor people.

Sage Narada then went back to the tree and cursed the tree for lying. He said that its flowers would never be used in the worship of Lord Shiva. He also cursed the Brahmin saying that he would be born as a demon and will attain moksha when he gets killed in the hands of Lord Rama.

In Bhagavada Purana, (3:21), it is mentioned that next to the Bindu Sarovar Lake, Sage Kardama performed austerities. It is described that the lake was surrounded by fragrant, and spiritually elevating trees and flowers, among which is Champaka mentioned.

It is mentioned in Shiva Purana, that Mount Kailash, was surrounded by fragrant trees, and Champaka was one among the trees.

It is mentioned in Bhagavatam, that the Vrajas of Vrindavan would talk to the Champaka trees, asking them if they had seen their beloved Lord- Sri Krishna pass by.

Champaka tree rich in medicinal properties is used in several ayurvedic preparations. The leaves, root, root bark, flowers, fruit and oil are used for its medicinal value. The extract of the flowers, leaves and seeds have anti cancer, antimicrobial, antioxidant properties. The active constituents of the plant are alkaloids, saponins, tannins, sterols, flavonoids and triterpenoids. The properties of the Champaka tree are as follows:

Bark: The bark is bitter, tonic, astringent, antiperiodic (a drug that prevents the regular occurrence of a disease) and alterative.
Root: Root is purgative (laxative) and the root-bark, emmenagogue, (stimulate blood flow in the uterus, pelvic region, cause menstruation) and demulcent (an agent that provides a cooling or a soothing effect over the mucus membrane, relieves pain or inflammation).
Flowers: The flowers are stimulant, tonic, carminative (prevents or releases gas from the gastrointestinal tract), demulcent and diuretic.
The medicinal use of the leaves, flowers, seeds, bark is given below:

Leaves: Leaves contain volatile oil. Leaves act as anti-inflammatory agents, thus effective in treating swellings. The juice of the leaves along with honey is an antidote for colic pain in infants. The decoction of the leaves is effective for treating arthritis, angina and pharyngitis (inflammation of the pharynx, region behind the throat).

For arthritis, crushed leaves are mixed with castor oil and applied on affected joints. Leaf juice is used to treat intestinal worms. The leaves are the richest source of ß-sitosterol an important plant sterol (subgroups of the steroids). ß-sitosterol is used to treat benign prostatic hyperplasia. Leaves also possess chemopreventive and adaptogenic properties. Leaves are effective in treating intestinal worms. The extract of the leaves are used as anti fertility agents. A paste of the leaves may be eaten or a decoction of the leaves may be ingested to get relief from fever.

The flowers are also effective as a plaster on stomach to treat colic pain. A mixture of the unopened buds taken internally is effective in treating gonorrhoea.

Bark:  The bark contains volatile oil, fixed oil, resin, tannin, mucilage, starch and sugar. The powder of the bark is used as antipyretic (reduce fever), and as a diuretic. An extract of the bark is used to treat diabetes related complications. The bark is also effective in treating tumours.

Seeds: Seeds are effective in treating rheumatism and for healing the cracks in the soles of the feet.

The bark of the tree yields fine timber which is used in construction, for making furniture besides being used in toy making and carving.

The flowers are considered sacred in the worship of Lord Krishna.

Champaka is one of the five flower darts used by Kamadeva (Lord of Cupid).

Women in Chattisgarh use the plant to regulate menstruation.