The Story of Damayanti and Nala is mentioned in Book 3 Vana Parva of the Mahabharata. The epics and puranas in India have moulded the character and culture of the people. When the Pandavas were in exile in the forest they took the blessings of a number of saints and sages who gave them courage and narrated to them various stories to instil courage, patience and forbearance in them. This enabled them to cross all the obstacles and difficulties that came their way and live the tough forest life that they were forced to live in. One day, Sage Bruhadaswa visited the Pandavas and explained to them the transitory nature of joy and suffering. To encourage them further he told them the story of Nala and Damayanti.

King Bhima was the King of the Vidharba kingdom. He had a beautiful daughter named Damayanti, who was the epitome of beauty and grace. Her fame spread far and wide as the wandering minstrels who went from kingdom to kingdom sang songs in her praise. The young and brave ruler of the Nishada kingdom, Nala too came to hear of her. Nala was an excellent archer and a keen huntsman. He handled horses deftly and drove chariots expertly. He enjoyed poetry and even composed poems. He heard about the fame and beauty of Damayanti and decided that she would be a Queen fit for him to marry. 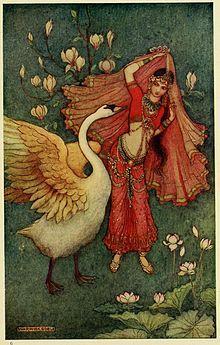 One day when Nala was wandering in his garden, a flock of geese flew past him. Stretching his hands he managed to catch one of them. The bird was terrified and pleaded with him that if it was released it would go and inform Damayanti of Nala’s yearning for her. Nala agreed and the bird flew straight to Damayanti’s palace into her garden. It then informed Damayanti about Nala’s qualities and prowess. Both of them now admired the other and decided to select each other as their mate.

Time passed and Damayanti’s parents decided that it was time to find her a husband. They organised a Swayamvara and invited all eligible princes from far and wide. Since Damayanti was famed for her intelligence and beauty, even the Gods Agni, Indra, Yama and Varuna decided to attend the Swayamvara. Nala too eagerly set out for the Swayamvara. On the way he encountered the four Gods who knowing about the love between Nala and Damayanti decided to test Nala. They asked him to promise them to deliver a message to Damayanti. Nala innocently agreed to this request.  They then informed him that the message was that Damayanti would have to marry one of the Gods in the Swayamvara. When Nala heard this, he was shocked and begged them to reconsider. But the Gods stated that he could not break his promise. Nala found himself transported by the power of the Gods unseen into the inner chamber of Damayanti in the palace. He was very happy to see Damayanti at last, but he knew he had to deliver the message. Damayanti too was very happy when Nala disclosed his identity, but she was very unhappy to hear his message. Then suddenly she decided on her course of action and informed Nala not to worry and he would be the only one she would select at the Swayamvara.

The day of the Swayamvara dawned and all the Kings assembled in the large assembly hall of the royal palace. All the four Gods too had come as Nala in disguise and all five were seated next to each other but Damayanti knew how to get over the situation and selected the true Nala by looking out for his shadow as it is purported that Gods did not have any shadow.

Meanwhile the demon Kali, the personification of Kali Yuga arrived at the palace. Unfortunately, he was late for the Swayamvara and thwarted in his desire to marry Damayanti he was angry that Nala had already been selected. He then vowed to the Gods that he would bring about the ruin of Nala. Meanwhile Nala and Damayanti got married and led a happy life and had two children. For twelve long years, Kali jealously watched Nala while he took the guise of a palace servant and one day when Nala defiled his ablutions by not washing his feet Kali saw his chance and entered Nala’s body. He then instigated him to a game of dice against his brother Pushkara. Nala lost his kingdom and possessions and was forced to go into exile with Damayanti. In the forest, Nala still under the influence of Kali deserted Damayanti who after many obstacles finally found refuge at the court of the King of Cedi. Another version stated that Nala could not bear to see the poverty and tribulations that Damayanti would have to undergo in the forest and so decided to abandon her, so that she would be free to return to her father’s kingdom.

Damayanti was grief stricken and unhappy and wandered hither and thither roaming hills and mountains in search of her lost love Nala.  Unhappy and pining for him, she would ask the birds and trees on her way, if they knew where to find Nala. Mad with grief and full of despair, she finally met a sage who reassured and calmed her that she would be reunited with Nala and live happily. She then bowed to the Sage and meeting some merchants who were on their way to the kingdom of Chedi, decided to accompany them. Watching Damayanti from the terrace of the palace, the Queen suspected her to be a maiden from some very good family and enquired about her welfare. Damayanti then sorrowfully related her sad story. The Queen promised to help her in her search for Nala and Damayanti became a close friend and companion to the Queen’s daughter Sunanda.

Meanwhile, Nala rescued Karkotaka, one of the principle Nagas from a forest fire who in turn promised to help Nala from the evil influence of Kali. He metamorphosed Nali into a dwarf like charioteer named Vahuka and gave him a magic garment adorning which he could regain his original form at any time. Another version states that the snake bit him informing him that when the poison took effect Vahuka would get back his original form. Vahuka then went to Rituparna, the King of Ayodhya who was famous for his skill in dice. Meanwhile, King Bhima had been searching for his daughter Damayanti and finally located her at Cedi and brought her back to his kingdom.

Damayanti pining for Nala finally discovered his whereabouts and his form as Vahuka. She devised a plan to be reunited with him. She sent an announcement to King Rituparna that a second Swayamvara was being conducted for Damayanti. King Rituparna decided to attend the Swayamvara and with the skill of Vahuka reached the kingdom of Vidharba from Ayodhya in a day. He was impressed at Vahuka’s expertise and Vahuka requested him to teach him his skill in dice in exchange for his knowledge in handling horses. On the road they learnt each other’s skill and on reaching Ayodhya, Vahuka resumed his original form as Nala and reunited with Damayanti. Another version stated that when Vahuka recognised his children and hugged them the poison took effect, which nullified the effect of Kali in his body and he regained his original form.

Damayanti then returned with her family to the Kingdom of Nishadha. He invited Pushkara to a game of dice and defeated him. Subsequently he retrieved back his kingdom and all possessions. After that, he and Damayanti lived happily with each other. Concluding the story to the Pandavas, Sage Bruhadaswa reminded them of the sufferings of Nala and Damayanti, who never swerved from the path of Dharma inspite of all their trials and tribulations. He exhorted the Pandavas also to similarly pursue their goals adhering to truth and righteousness, undaunted by all the sufferings that came their way and blessed them that success would finally be theirs in the end.

Many books, plays and movies have been made on the eternal love story of Nala and Damayanti, and Damayanti has always been considered a pure and chaste woman in the history of pious women of India.

The saints and sages of yore realised that the Vedas and their commentaries were too subtle to be comprehended by ordinary men. This was the purpose of writing the Puranas and epics in order to enable common folk to understand essential truths and live noble lives. The thousands of stories and episodes in them provide examples of the benefits of living highly virtuous lives transcending lower passions like greed, pride, anger, lust and ego. They reiterated that the greatest victory of man is not money, fame or power but the victory over self.