Throughout the state of Bihar, the folk songs are sung by amateurs. Folk dance is an integral aspect of Bihari culture and there are three distinct traditions or schools of folk dance. They are as follows:

Music and dance play a pivotal role among the tribal communities and numerous professional training centres have also been established to nourish and cultivate this rich tradition.

The main instruments accompanying the Maithili folk dance are as follows: 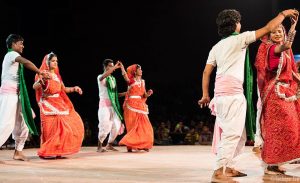 The most significant thematic dances of the Mithila region are as follows: Chhau is the folk dance of the Seraikella Kharsawam region of Bihar and it was originally a war dance to perfect the fighting techniques. The word Chhau signifies a mask and over the years this dance form has developed into a narrative ballet. The wearing of masks during the performance of the dance conceals the identity of the dancers. This dance is especially organised during the spring festival, during which the people of Seraikella colourfully participate during the occasion. The Royalty of the Seraikella region religiously participate and promote this dance form.

The Adivasi version of the Chhau dance is known as Sastriya Nritya. In this version, the mask is done away with and the themes are essentially rooted in the past.

Different tribal groups have their own training centres, to impart lessons on tribal dance to young men and women. Dedicated youth dormitories have also been established for this specific purpose. This dance form is laden with emotional and sentimental values and therefore is not treated as a mere form of dance. The important dance festivals of the Santhals are Ba Parva, Dasia Parva, Maghi Parva and Karma. The major dance festivals of the Oraons and the Mundas are Paika, Jatra, Karma and Jadur. The primary instruments accompanying the dances are Shehnai, Dhol, Tamburu, Sarangi, Manjira and Nagara. The Nachni and Natua dances are the semi-professional dances of the region. The Nachnis and Rasiks gather on the occasion of Kartik Purnima day to perform Rasas.

The folk songs of Bihar are mostly sung by amateur singers, all over the region. Thumar (females while engaged in paddy plantation), Barahmasa (same as Thumar), Jatusari(sung by females while grinding corn), Sohar(on the occasion of child birth) and Sumangali (while performing marriage rites) are the most popular genres of folk music. The Yajaks, Bhajaniyas, Kirtaniyas and the Pamarias were employed by the Brahmans for dance performances on various occasions.