The Rasa dance form essentially belongs to the Saurashtra and Kutch regions of Gujarat. The origins of the Rasa dance can be traced back to the Puranic period. The number of dancers in a Rasa performance can go up to 64 and it is usually performed by both men and women. They dance in a circle, with the accompaniment of music and singing. Clapping and beating of sticks also accompany the dance performance. The Rasa dance can be categorised into three varieties. They are:

The origins of the Rasa Nritya may be tracked to the mythological period of Lord Krishna. The Rasa dance was believed to have been performed by Lord Krishna, along with the Gopikas. In the Dandia variety, both men and women dance in a circle, to the accompaniment of musical instruments such as Zanz, flutes, shehnai, cymbals and dhol. Small sticks are wielded by the performers and struck against one another to beat time. When the beating of the sticks is replaced by clapping of the hands, the dance is called Garbi. Some of the other varieties of Rasa dance are as follows:

The origin of the Hallisaka dance is traced to the Harivamsa Purana. It is a form of a group dance, which is performed by both males and females. A man dressed as Lord Krishna stands in the middle of the circular arrangement, whereas the other female dancers stand in the form of a circle, pose as the Gopis. The tala of the performance is kept by the clapping of the hands and singing.

The Dangi Nritya is usually performed by the Dangis, whose culture is essentially a mix of the Gujarati, Maharashtrian and Dravidian cultures. It is performed by both men and women. They form long circular chains or Shrinkalas and dance in serpentine patterns. Each variety of steps in this dance form is known as Chala and there are a total of 27 varieties of Chala. One of the most amazing dance formations are the human pyramids.

Garba dance is a very popular dance form of Gujarat and is performed by the ladies on the occasion of Sharad Purnima, Navaratri, Holi and Vasant Panchami. The dance is dedicated to Goddess Amba and the themes vary from seasons to domestic and marriage affairs. The word Garba has been derived from Garbha Deep i.e. a lamp inside a perforated earthen pot. This pot is carried on the head by the women folk and moved in circles, to the accompaniment of musical instruments, clapping of hands and snapping of fingers.

Garba dance is a popular folk Dance of Gujarat. It is a circular form of dance performed by ladies on Navaratri days, Sharad Purnima, Vasant Panchami, Holi and such other festive occasions. The word Garba is derived from the word Garbha Deep meaning a lamp inside a perforated earthen pot. The light inside the perforated earthen pot symbolises the embryonic life. In this folk dance, ladies place the pot with the lamp on their heads and move in circles, singing in time measure by clapping their palms or snapping their fingers, to the accompaniment of folk instruments.

The dance is usually performed at night by women, who place a photo of the Goddess at the centre and dance around it in circles. The women also carry Mandavali, a small canopy of bamboo chips covered with red silk, which symbolizes the temple of Goddess Amba. Sari, Ghagra, Choli, Odhni and silver ornaments are the attire of the women. The men wear Kediyum (shirts) and Vajani (trousers).

The Tippani dance is the folk dance of the labourers engaged in the construction work. It is usually performed by labourers using long sticks called Tippani. The rhythmic musical process makes the folk escape the arduous and monotonous nature of their work. The costumes are short coats known as Kedia and tight trousers or churidars. The accompanying musical instruments are Nagara, Damru, Tabla, Pavo, Shehnai, Ravan Hattho and Jantar. 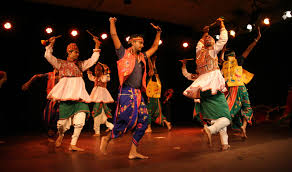