In Hinduism as per Sanatana Dharma, the Supreme Being Paramatma manifests as Brahman, the universal spirit which is the absolute Reality and is also infinite. Lord Vishnu is considered the Preserver of the Universe. He is omnipresent, omniscient and omnipotent and pervades all sentient and non-sentient matter. He took various incarnations at various times for the annihilation of the wicked and the re-establishment of Dharma. In the Dwapara Yuga, he came down as Lord Krishna. It is said that Mother Earth unable to bear the burden of the increase in the Adharmic or evil deeds on Earth approached Lord Brahma in the form of a cow. Lord Brahma accompanied by the other Devas and Mother Earth meditated upon Lord Vishnu on the shores of the ocean by repeatedly chanting the Purusha Suktam (a hymn in the Rig Veda dedicated to the Purusha or Cosmic Being). The Lord was pleased and appeared before them and stated that since Bhumi Devi had approached him in the form of a cow he would incarnate among cowherds. It is said that Prajapati Sutapa and his wife Prsni worshipped Lord Vishnu with great devotion. Pleased with them he appeared before them and granted them a boon. Overwhelmed with the Lord’s presence they asked him for a son who would be equivalent to Lord Vishnu himself, repeating the same statement thrice. Lord Vishnu in his infinite compassion told them that He Himself would be born as their son in different births three times. In the Sathya Yuga, Lord Vishnu was born as Prsnigarbha, son of Sutapa and Prsni, in the Treta Yuga He was born as Vamana, son of Aditi and Kashyapa and in the Dwapara Yuga He was born as Krishna, son of Vasudeva and Devaki.

The Yadava clan were the descendents of King Yadu. The Lord of the Yadus was King Sura whose kingdom was divided into two parts Mathura and Surasena. Ugrasena and Devaka were the two brothers with Ugrasena ruling Mathura. Subsequently Ugrasena had a son named Kamsa and Devaka had a daughter named Devaki. Sura had a son named Vasudeva. Thus Kamsa and Devaki were cousins and as Kamsa did not have any siblings, he considered Devaki as his sister. His love and affection towards her was boundless. 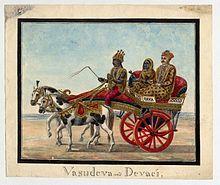 Soon Devaki reached marriageable age and it was decided that Devaki and Vasudeva would be united together in holy matrimony. Festive preparations were in full swing with Kamsa himself overseeing the arrangements with great happiness. With great love, he offered many ornaments, elephants and horses to the couple. After the wedding, Kamsa himself drove the chariot which was to take the royal couple to Vasudeva’s palace.

Suddenly on their way there was a voice from the sky which cautioned Kamsa that the eighth son of Devaki, whom he was so lovingly transporting, would one day be the cause of his death. Kamsa was shocked at the prophecy and immediately his love turned to hatred. He dragged Devaki from the chariot and drawing out his sword prepared to kill her. But Vasudeva intervened and pleaded with Kamsa to desist from committing the heinous crime of killing a woman. He then promised Kamsa that he would hand over every child that would be born to Devaki, if Kamsa would spare her life. Kamsa agreed and then decided to imprison the couple to oversee the birth of the children and subsequently slay them. Meanwhile Kamsa overthrew his father Ugrasena and took over the kingdom of Mathura

From the very day of her marriage, Devaki’s joy had turned into grief. In due course, a girl child was born and Devaki was forced to part with it.  Vasudeva truthfully carried the child to Kamsa who was struck by his nobility even in such an extreme situation. It is said that even the hard heart of Kamsa was won by Vasudeva’s integrity and he decided to spare the child as he had to fear only the eighth child. Vasudeva took the child and returned happily back to his palace.  Sage Narada then appeared and cautioned Kamsa about the Yadava race and the prophecy of the birth of the avatar in that race.

Now Kamsa was really angry and rushing to Devaki’s house he wrenched the baby from her hands and killed it with his sword. In this manner he killed six of her children. Another version which is more popular states that Kamsa on hearing the prophecy threw Devaki and Vasudeva in jail and it was here that all the children were born and subsequently killed by Kamsa. Yet Kamsa lacked peace of mind from the time he had heard the divine prophecy. Meanwhile Jarasandha, the King of Mathura offered Kamsa his two daughters in marriage. Kamsa now grew stronger with Jarasandha and other allies. He began harassing the Yadavas as responsible for his impending doom. Meanwhile Devaki conceived her seventh child who was none other than Maya Shakti.  When Kamsa came to destroy the child she flew out of his hands and is said to have entered the womb of Rohini who was the other wife of Vasudeva. Vasudeva had placed her in safety in the house of the cowherd chief Nanda. Rohini subsequently gave birth to Balarama, who was the incarnation of Adisesha who forms the bed of Lord Vishnu in Hindu mythology.

The birth of Krishna

When the seventh child escaped, Kamsa was mad with worry and fear and began to massacre all infants in his kingdom. Eventually, Krishna was born and taken to safety from the jail miraculously to the house of Yashoda and Nanda. He later returned along with Balarama to Mathura, freed his parents, killed Kamsa and reinstated Ugrasena on the throne. Devaki was ecstatic and shed tears of joy. In later years Vasudeva initiated the thread ceremonies of both the sons Krishna and Balarama. They then went to the ashrama of Sandeepani Muni to complete their education and then returned to Mathura. It is said that later on Devaki requested Krishna to bring to her the souls of her six dead children. He is said to have brought them in the form of babies and Devaki fed them her milk with great motherly affection after which they returned to their respective planets. Thus her grief was assuaged by the compassion of the Lord.

The Mausala Parva or the Book of Clubs is the sixteenth book of the Mahabharata which mentions the death of Krishna and subsequent events. After the passing away of Krishna, his father Vasudeva through the power of Yoga gave up his life. Devaki and the other three wives of Vasudeva then ascended the funeral pyre and were consumed along with him. 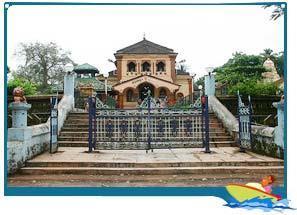 One of the most unique temples of Devaki is the Devaki Krishna Ravalnath Saunsthan temple in Goa where Lord Krishna is worshipped alongside Mother Devaki. The temple was shifted to various places to avoid persecution to its present final location of Mashel in Goa. The inner sanctum (garbha griha) of the temple contains the beautiful idol of Lord Krishna and Mother Devaki. The idol of Devaki is in standing posture with her left hand holding baby Krishna. An annual festival (Zatra) on Malni Purnima is held every January at the temple.

The role of Devaki and her greatness in being selected as the sacred mother for the advent of Lord Krishna has always been eulogised and praised for centuries by saints and seers. Books and movies have always emphasised the role that she played in the birth of Krishna.

Devaki though the chosen one to bring forth the avatar of Lord Krishna had to undergo great sufferings and tribulations. She had always been pained that she could not bring up nor witness the Leelas of Lord Krishna during his childhood. Subsequently Krishna blessed her and praised her great maternal qualities as he knew that even though she was far away she would always pray and worry about the welfare of both her sons Krishna and Balarama. Her name has been associated with purity and good fortune in the annals of Hinduism.