The name ‘Keralam’ or ‘Kerala’, as it was adopted by the English language, comes from the Malayalam words ‘Keram‘ meaning Coconut Palm and ‘Alam‘ meaning Land or Place. Keralam is therefore ‘The Land of Coconut Palm’.

Origin of Kerala has been linked to a legend dating back to Satya Yug. According to this legend, Kerala rose up from the sea when Lord Parasurama threw his ax into it and the sea receded to bring up this narrow strip of land from underneath. Lord Parasurama, believed to be the sixth avatar of Lord Mahavishnu, threw his ax from Gokarnam southward across the ocean in rage and in repentance for his actions of killing Kshatriyas. The land of Kerala emerged from the waters  of the Arabian Sea with the blessing of Varuna-the God of Oceans and Bhumidevi- the Goddess of Earth. The sobriquet “God’s own Country” thus bestows it in Kerala.

The main dress worn by the people of Kerala is mainly traditional in nature. The traditional dress forms are the ‘Mundu and Neriathu’ (a white piece of cloth with golden zari border symbolizing royalty) for men; and ‘sari’ (a 5-6 meters long piece of cloth embroidered with golden border) with jacket for women.

Mundum neriyathum is the traditional clothing of women in Kerala, South India. The mundum neryathum consists of two pieces of cloth: A mundu is a one-piece cloth draped on the lower part of the body while neriyathu is worn over a blouse and could be worn in either the traditional style with the neriyathum tucked inside the blouse, or in the modern style with the neriyathum worn over the left shoulder. It is worn by women from all communities of Kerala and is often referred only as “Kerala saree”. The mundum neryathum for festive occasion has golden colored borders or a broad zari border known as Kasavu, lending the costume another name of “Kasavu Saree”.

Hindu Dress Style
The Men are dressed in a hand-woven cotton cloth, called moondoo, and wear sandal tika on their chests and forehead. When going outside, they throw a smaller cloth over their shoulders.
Even now, men adopt the same style while at home. The hot climate makes this the most comfortable dress. While going out, however, they wear a shirt, and the trouser replaces the moondoo in many cases.

Women of three or four generations ago also followed a similar pattern. For the last few generations, Hindu women of Kerala had adopted the practice of wearing a blouse and a second cloth over the blouse.
Both men and women preferred white dresses. The moondoos had gold (kasavoo) borders for wearing on special occasions.

Muslim Dress Styles
Muslim men wear a shirt-like apparel and a Muslim-style cap, in addition to the moondoo. The moondoo itself was worn in a style different from Hindus.
Muslim women wear a full-sleeve blouse, typically made of embroidered cloth, a special kind of moondoo and a cloth to cover their heads.

Christian Dress Styles
Men wear a white moondoo and sometimes, white shirt-like apparel. Women also wear white, a special kind of blouse and moondoo that is worn in a special way. One edge of the moondoo remains folded fan-like into multiple folds and this section is hanging at the back.

Modern Dress Styles
These days, the traditional styles disappear among most people. Women of all communities where the sari, or the north-Indian style Churidar. Men have taken to shirts and trousers, imitating western fashion (and also finding that these are much more suited to the modern, diverse workplaces and considerable travel).
At home, however, you would find both men and women reverting to the more traditional styles, to cope with the hot climate and humidity.

With the changing trends in fashion and designing, the dress codes have changed. A multitude of colors and designs are available today. The people have now taken to the northern style of dressing up though the western dresses have also found a lot of acceptance among the masses

Dresses according to Age Groups

The full skirt with long blouse that formed the traditional teenage dress of malayale girls is fast disappearing from the Kerala fashion scene. It, however, is still worn by village girls though their counterparts in the city have slowly discarded it. On ceremonial occasions and festival days the long skirt with pleats and kasavu Boarder with front or back open blouse is worn.

With the advent of the North Indian fashion dress on a large scale in Kerala, the half sari dress is seldom seen in any part of Kerala. The half sari that was worn earlier consisted of a full skirt, short blouse and a davani (shawl) and sari blouse

Dresses according to the Sex

The men in kerala wear a full sleeved dress called the jubba and is worn together with the mundu a long white cloth tied to the waist and let down till the ankle. The jubba is worn only on selected occasions. Jubbas in modern days have been embellished with embroidery works. The materials used are cotton, silk and khadi.

Mundu is a long piece of cloth worn by men in Kerala that is tied to the waist and let down till the ankle. It is the simplest form of dressing prevailing in the world. Cotton Dhotis (Mundu) are used for normal wearing, but for wedding purposes silk dhotis with silk borders (Kasavukara) are used.

The demand for the set mundu among the women of Kerala contrary to general belief is in fact growing. It is a form of sari in two sets worn with a blouse. Used primarily on festival occasions like onam and vishu and for visiting temples, the set mundu is available in Sandal wood color or white color with silk border or colored border. It is worn in the same fashion of a sari, but without pleats in the front. Though initially intended as ceremonial dresses in the ancient times it has, however attained a position of being worn by both young and old on all occasions.

The Kerala bride typically wears a light colored or pastel colored sari with elegant border. The white or cream color marked by their elegance is a favorite with men as well as women. The traditional bridal attires have not exactly been replaced, but the existing gamut of traditional bridal dress styles have been considerably reinvented and revamped over the years. The graceful and simple styling of the bride dresses is fast substituting the layered style of the earlier bridal wear.

Though, Malayalee brides are still popular in their heavy gold jewelry, the traditional profound golden jewelry is substituted with more grace and stylish gold designs.  Also, the days of chunky gold are soon yielding to the trend of white gold and silver look.  Rubies, diamonds, pearls and other expensive stones coated with white gold or platinum have become extensively  fashionable with the Kerala brides.
Set Saris with matching blouse piece are also adopted in few parts of the state today. The `set-sari` resembles the `mundum neriyathum` with the only difference that it consists of a single piece of cloth. The ‘kasavu’ border is distinctively  visible on left side (the left thigh) of the woman who wears it. This ‘kasavu’ border is that of the ‘neriyathum’ that is worn on the top of the ‘mundu’.

Though the traditional bridal dress continues to be common with younger generation, many of the young brides are still enthusiastic on trying out more contemporary or even designer bridal wear for their grand day. Young brides and grooms are now appointing wedding apparel stylists and even professional sari drapers to make certain that the grand day is nothing short of an extravaganza. Wedding stylists help the bride and groom choose on the color, fabric, look and design to suit them accordingly.  A major change has been in the clothing sector with brides set to widen funds for that ‘Cinderella ensemble.’ The bride now wants to have a `different’ look for every gathering that is related to the wedding. Every marriage season brings in its own changes in fashions and the people have become more conscious about their looks.

The traditional blouse that’s teamed with the sari had traveled beyond the puffed sleeves to include attractive necklines, noodle straps and interesting embellishments. The Kerala brides have also started experimenting with new colors that were once alleged as rather  unoriginal or unconventional. Today’s bride dares to be different. She prefers originality and style, and has left the whites and creams  far behind as she steps out in different hues on her grand day. Marine colors, earthy shades, blushing pinks, subtle pastel shades are all becoming a part of the bridal trousseau.

The rich hued textiles of Kerala scores brownie points with most of the tourists visiting the lush backwaters. The traditional garb of a Keralite women consists of mundu and neriyathu. A mundu is a piece of cloth woven around the waist and the neriyathu graces the upper part of the body, bearing similarity to the ubiquitous dupatta. It is teamed up with a blouse. Then there is the enduring favorite, the traditional white sari with the golden border that is a must buy on trip of Kerala.

The southern states have a rich legacy of traditional textiles. They are the irrefutable textiles maharajas of the country, churning out enviably stunning silks and cottons that are lapped up by people all across the continent. The textile industry generates huge revenues for Kerala.

There are innumerable weaving stations all across the state and each district has its distinctive insignia. The kalarakudi saris can be distinguished from mundu veshti. While the Kalarakudi saris are white cotton muslins with intricate zari embellishing the borders, the mundu veshti saris weavers used simple colored threads to adorn the pallus.

Besides weaving saris, Kerala also produces premium quality lace and embroidered goods. It is usually done by women artisans. Caps are produced in bulk at Kasargod which is then exported to Gulf and African countries. 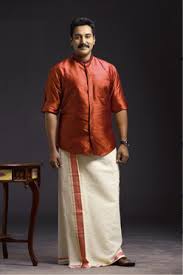 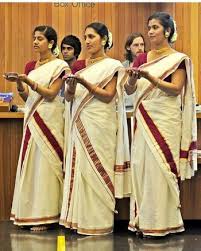