Maharashtra is the land of prosperity, culture, spirituality with growing global recognition due to its advanced industrialization, ITech cities. Ancient glory, says that the land is a motherland of great Marathas, the warriors who ruled out the region for centuries and one of the major reasons of rich culture and heritage of the state.

Maharashtra-literally means “Great Nation” is a prosperous and highly industrialized region of the Indian Union. The verdant hills, scenic coastal plains and massive forts offer a different shape to the geographical map of the state. This is the land of Shivaji, the founder of Maratha Empire and a great fighter against the Mughal Empire.

Maharashtra was known as “Rashtra” in the Rig Veda, “Rashtrik” in Ashoka’s inscriptions and “Maharashtra” afterwards, as attested by Huein-Tsang and other travelers. The name appears to have been derived from “Maharashtri” in an old form of Prakrit, an ancient Indian language.

The land situated in the north center of the Indian peninsula is bordered by the states of Gujarat, Madhya Pradesh, Chhattisgarh, Andhra Pradesh, Karnataka and Goa. The Arabian Sea forms the western coast of the state. The capital city Mumbai, also the biggest city of India is the second largest producer of films in the world. The cosmopolitan style of living of the people makes it a world class city. The state today has become a major destination for the film stars and cultural celebrities. The big cities of the state like Mumbai and Pune are famous for their educational institutions and research centers. The modern Maharashtra is a mixed result of indigenous traditions and western education. Tourism and culture are its main heritage and it unifies every community in it with same harmony and love.

Maharashtra, the name itself means ‘Great State’. It is India’s largest state and is famous for its rich culture, tradition, language and ritual. The state has made great contribution in industrial and technological advancement of India. Moreover, the state’s distinct dressing style differentiates it from other states of India.

The traditional dress worn by Maharashtrian women is 9 yards saree known as “Nauvri” along with short-sleeved blouse known as “Choli”. Nauvri sarees are usually cotton and at the time of special occasion, silk “Nauvri” sarees are worn. Paithani sarees are also a famous saree that is worn by most of the Marathi women. Along with these vibrant sarees, Maharashtrian women like to adore themselves in heavy jewelries. The jewelries are of Maratha and Peshwa style.

The men of Maharashtra wear cotton cloth of about two and half to three meters long known as Dhoti along with a shirt known as “Kurta”. They also wear waistcoat known as “Bandi” over the “Kurta” and turban called “Pagadi” and “Pheta”. During the time of festival men wear long pants called “Churidar” or “Pyjama” and long coat known as “Ackan”.

Though the impact of globalization has left a strong impact on the dressing style of Maharasthra, it still has a strong hold over its traditional culture and costumes.

There is no special dress for some special holidays, celebrations or family get-togethers in Maharashtra. One can wear anything, which they afford to, and it depends on their choice and financial conditions. But generally, for ceremonial occasions, men prefer to dress the spacious looking Indian style long coat, called ackan, and chudidar pyjama or survar. It is slightly gathered at the ankles-end with bracelet-like horizontal folds. A folded woolen or a silk cap and cadhav or pump-shoes perfects the ensemble. Women generally costly sarees like benaras brocade, chanderi, kanjeevaram and surat silka.

In past days, generally people of wheat and cotton growing areas wear shoes, but were less common in the rice growing areas. Women go bare-footed, but sometimes have sandals in the past days. Boots and shoes in the European fashion are popular since the British days in towns and cities, but their use is still confined to a small number of rich persons, pleaders, young merchants etc. For the use of the common people, sandals and chappals of various patterns are the most common one in the state. Kolhapuri chappals, which are made in Kolhapur district of Maharashtra and its surrounding towns and villages, is famous worldwide.

As Maharashtra is the land of Marathas and Peshwas, women wear traditional jewelries derived from these two dynasties. Very much popular jewelry for the Marathi women is Kolhapuri saaj, a special type of necklace. It is designed in other parts of Maharashtra as well, but Kolhapuri saaj is the most famous one.

Different types of bangles like Patlya, Bangdya and Tode are the typical jewelry in the hands of women in Maharashtra. Maharashtrians fond of pearls are vivid in their Chinchpet (choker), Tanmani (short necklace) and Nath (nose ring). The Bajuband (the amulet) is also a favorite. Earrings with flower-shaped are a popular as well.

Every ornament made in the traditional style has a local name. Gathla and Putalimal are the gold coins strung together to form a necklace. Toda is a bulky bracelet. Sari is a real work of art where the two wires are twisted together with a spiral design at each end. It is worn quite tightly around the neck. Circular rings connected together forms chandraharas. Beads are often used in the Maharashtrian jewelry. Artists make beautiful strings out of molded beads which are called Mohanmal.

Hand-block printing is mostly done in the Vidarbha region of Maharashtra. Bavasars (as the community is known as) mainly use natural colors. Bedcovers, Wraps and quilts are the main products. Folk styles are used to make floral and animal designs.

In Ganeshpur tassar-weaving is done by the koshti community.. Tassar silk is called kosa, in Sanskrit. The varieties produced in tassar-weaving are mothe choukada, a design in big squares, and lahan choukada, a weave with smaller squares. The yarns woven contains kosa and mercerized cotton. The gunja salai has diagonal designs and the colored lines used along with this are green, blue, or orange. 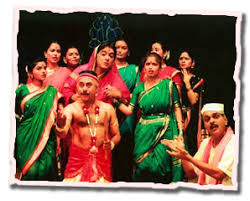