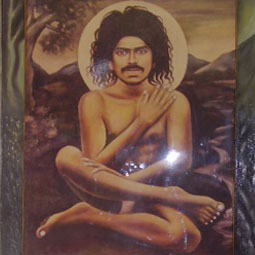 Alukku Samiyar(19th century) was born in Pudur near Pollachi, in a pious Hindu family. From his childhood itself, he was an ardent devotee of Lord Shiva and used to worship him in the temples. He was not interested in playing with his friends at his younger age, but performed puja and abhishekham to Shivalingam at the Shiva temple located nearby his house.

At his teenage he went on to holy pilgrimages and worshipped Kashi Viswanathar, Srisailanathar and Somanathar. Then he performed severe meditation on Lord Shiva in a forest cave, and through that, he has gained more powers. He returned back to his native place after a few years, and lived a simple life. He never got married, and remained as a strict bachelor throughout his life. His original name was not known. He would take bath only occasionally, and hence he was fondly called as Alukku Samiyar by his devotees.

He used to take only simple food and relieved the people from their diseases through his spiritual powers. After doing spiritual and human service for many years, he has attained Jeeva Samadhi at his native place in the year 1918. Still now lot of devotees are visiting and worshipping his Jeeva Samadhi and gaining more prosperity in their life.

Let us worship the great siddhar and be blessed.

2020-03-18
Previous Post: Ajamila – A Character in Bhagavata Purana
Next Post: Ammalu Ammal -A great devotee who lived among us!