The music in India is basically divided into three classes, although now there are many new terms; the basic ones are:

Hence the type of instruments comes under the different types of music style. Generally, the instrumental music is similar to vocal music but there can be seen the distinction and varieties in several types based on the instrumental styles. 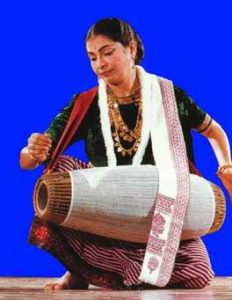 The mixture of Hindu Music Tradition and Persian performance custom. During the time of foreign rulers and Mughal empires in India, the music was transcribed in many forms and traveled from different countries to India. The courts were the places where the carriage of music was offered with lots of sentiments and practice. And so were the artists, only one amongst hundred had that talent to describe and live the type of music with devotion. So the Northern Region of India had the most proximity of music and varieties of instruments used along with it. The Mughal Empire brought the Persian culture and beliefs and hence the fusion of diversity, culture and standing with linguistic, economic and cultural affinities, the Hindustani Sangeet came into existence.

Popularised by the most famous artist in Indian history, Pandit Ravi Shankar. Sitar is yet very well known music Instrument all over the world. With a long neck of stings usually, 17 Sitar is used in classical music hence it is a stringed instrument.

The origin of Sitar was found in the Moghul Empire and betokens the timely fusion between Indian and Persian characteristics.

Derived from another ancient instrument Rabab, Sarod is a string and membranous instrument with a metal plate between the frets. The style of playing includes a pick made up of a coconut shell with different alignments.

A reformed version of Sitar, Surbahar is a bass sitar generally tuned lower than a Sitar. This instrument has an advantage over Sitar as the difficulty level to play the octaves is smooth, hence the artist who knows how to play the Sitar can easily play Surbahar.

Another version of ancient music instrument Rudra Veena, Vichitra Veena is like a Hawaiian Guitar with no frets in it. The style of playing is simply sliding through the strings.

Known for its rich sound Tanpura resembles a Sitar, except it does not have frets. According to the north and south region of India, it is called by different names which are Tanpura in the Northern region and Tambura in South Indian Music.

It is classified into 3 different styles which are;

An inherent instrument of Kashmir now played all over the northern region of the country. It is a hammered dulcimer thumped with some wooden mauls having various strings attached to it.

Another Moghul empire masterpiece, Seni Rabab is a stringed instrument derived from Persian culture in India. In the court of great Mughal Emperor Akbar, Tansen made this instrument famous. Also, this is appreciated by the Sikh Guru, Gurunanak and hence the generation after generation in North India.

A small harp-like instrument, Surmandal or Swarmandal generally used to give a harmonic base to Indian artists. A peculiar but rather simple instrument cannot be used for heavy music or intense classical music.

Flute, the most common musical instrument across the world. Typically made up of Bamboo or reed Bansuri preferred more in classical music. One needs to have flexibility and control while playing it. The Bansuri holds a great cultural and emotional significance in India, as it was the instrument played by Lord Krishna which is associated with diverse religious aspects.

Made famous by Bismillah Khan, Shehnai is a North Indian Instrument and mostly found in temples or played in weddings. This instrument was included amongst the nine prestigious music instruments in Royal courts in history. The structure considers a wooden body and a brass bell. It is all about the arrangement and number of reeds in it which is distinctive at different levels of use.

This is a Non-Native Indian but a native European music instrument generally known as Peti or Baja. A reed organ with hand pump bellows harmonium is the most used and basic instrument in India. Generally used in classical music except for south Indian Classical music.

Called by many names across the country it is the most common instrument. Designed with a set of brass cymbals, can be carried around while dancing or singing. Mostly is it used while practicing Bhajans or Kirtans or any folk dance form.

The most difficult instrument to play, the richness of sound is immeasurable and depends on the floating strings on it. The technique to play this is a simple sliding technique and mostly associated with Kathak dance style and vocal styles like thumri, dadra, and kheyal.

An extended version of Veena, the name Mayuri signifies the Peacock like structure. Hence it is a string instrument looks a little like veena and not very popular amongst the country. 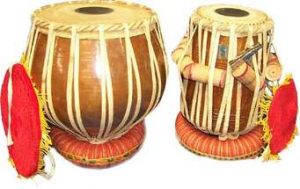 A peculiar set of two hand drums one small and one large, Tabla is a membranous beating instrument. The smaller right-hand drum is called Dayan and the larger left-hand drum is called Bayan. This has an interesting construction also the right-hand drum is always made up of wood and the left-hand drum is made up of any metal.  The most significant structure of Tabla is the humongous black spot in the center, which is generally a mixture of gum, soot and iron filings. The origin stories say that Tabla was originated from a barrel-shaped drum from about a hundred years ago and hence it is the most popular and interesting musical instrument.

Carnatic Sangeet is the south Indian version of the music and is totally different from what Hindustani Music offers. Including a great history and stature, the Carnatic Sangeet has a rich and sophisticated history amongst all music styles. The artists who played the Carnatic music and the instruments are given a world-class reputation. Hence there is not a single artist in Carnatic music who is not rewarded or renounced by the world. The style is very difficult but focused, and mostly found in the South Indian States. States like Tamil Nadu, Kerala, Andhra Pradesh, and Karnataka are distinguished for their influential pres­entation of Dravidian cul­ture across the country.

The origin of Carnatic music was founded by Purandardas (1480-1564).  He is con­si­dered to be the father of Carnatic Sangeet and also has given a big prestige for the codification of the system of edu­cation, credited by thousands of songs.

Hence, the types of instruments used while performing Carnatic music are as follows:

A large clay pot, generally used in South Indian classical music is very fascinating and simplistic music instrument.  It works on the actions of resonance, in which primary function is simply ringing the pot by striking fingers or hand. On the other hand, the secondary function is to raise the pitch while opening and closing the hole with the stomach.

A double reed South Indian Version of Shehnai, Nadaswaram or Nagaswaram is slightly larger than the Shehnai and less complex too. A stated this is also prosperous and commonly found in Temples and at Weddings.

Simply say South Indian Veena, solely associated with Goddess of knowledge, learning, and arts “Saraswati”. A creative and extraordinary creation, Veena is used in Carnatic Music and has a very resonating jackwood structure carved in three sections. The classic Veena is a one-piece structure and both types will have 24 frets. The performer sits across the instrument and plays with hands while transcending rhythm gestures on the strings and frets.

Commonly known as Chitraveena, Gotuvadyam is usually a solely Carnatic music Instrument. The specialty of this instrument is that it has six different strings and generally resembles the Saraswati Veena. It is played in a slide somewhat like a Hawaiian guitar. Made famous by Sakharam Rao of Tiruvidaimarudur this instrument is unique in its own ways.

India is famous for its folk music more than anything. Over the years it brought together many civilizations and culture in a good bond of music and art.  Due to the extreme diversity in the culture and regions, each region has its own variety of folk music and instruments as well. The classic nature of Folk music is the nature and adaption of various processes and culture from the beginning of one’s lifestyle. It emerged from the roots of villages and most rudimental situations of Indian society, where the child has knowledge of music before he is an adult. This makes it more generous and natural in nature because Folk music explains and shows the folk of the country where the soul of India resides.

All those small acts of education the ignorant pals of society, or village people the Folk music plays a very important role. Where one side the Hindustani music and Carnatic music is mostly technical but Folk music, on the other hand, shows the simplest issues of life into a rhythmic form. For example, in parts of Andhra Pradesh, sex education is being taught with the help of Folk Music. Also, the after puberty instances are also being taught with the songs to the young girls.

Generally, people confuse Folk Music with Tribal Music which again is two different types of aspects. Folk music shows the roots, culture, and nature of lifestyles people are living from centuries. On the other hand, Tribal music is just a community of certain class people who tries to descend the music as their lifestyle. The major advantage of  Folk Music is that most of the instruments are being formed by the things available in nature and surroundings, hence the most environmentally savvy and innovative way to serve the music.

The types of Musical Instruments used in Folk Music are as follows. Although most of them are origin free and description free, hence:

The storytelling music instrument used in the popular storytelling theatre, Bura Katha. This instrument is most basic and in the form of rings worn by the artist in thumb and fingers to give a music sound while clapping together.

Originated from North East India and Bangladesh, Banam is a very important instrument for Santal people. It is again a stringed instrument having beautiful carvings on the top of it. Made up of wood this instrument shows many cultural aspects of its people.

Originated from Bangladesh, a flute-like instrument used in variety of folk music theatres like ‘Poddopuran’. Generally the bombashi is found only in the Dharla (river basin area of Bangladesh).

The Charchari is a folk drum discovered among the Santhal, Ho, Bhumij, Oraon and Kharia peo­ples from North East India. This instrument is mostly used while the annual ritual hunt and the Chhau folk dances with varying situations.

Found in the South Indian states of Kerela and Karnataka used in the theatrical dance forms like Kathakali and drama like Yaksha Gana.

Used by Sikhs and Punjabi’s in their famous event Shabad, Chimpta is a fire tong.

The very famous instrument all over the India mostly in the parts of Northern India. It is a cylindrical and membranous big instrument generally used in many dance forms and events, basically in all happy big events and festivities.

Rest of the given instruments does not have basic information but are generally used in the specific culture and folks of India. The concept of Folk music and instruments is only found in the roots of its origins, and is famous in their particular places and parts. It has nothing to do with technicality of music but in a way it is technical naturally.

The Indian form of art and music has served more than enough to the world, where nothing more than diversity and culture coming together will be seen. However, the difference in each thing and music and instruments is slight. But even though it is serving its unintentional purpose of sharing legacy and culture with the world.