In: Hindu Lifestyle, Jewellery
With: 0 Comments

In Indian Astrology, the horoscope (janma patrika) of the person is derived before advising him any gems or stones. The horoscope establishes the position of various planets and their influence during various periods in one’s life. Thus, the concept of Indian Gemology is based on planetary influence and is said to provide more fruitful results and changes for better living conditions. 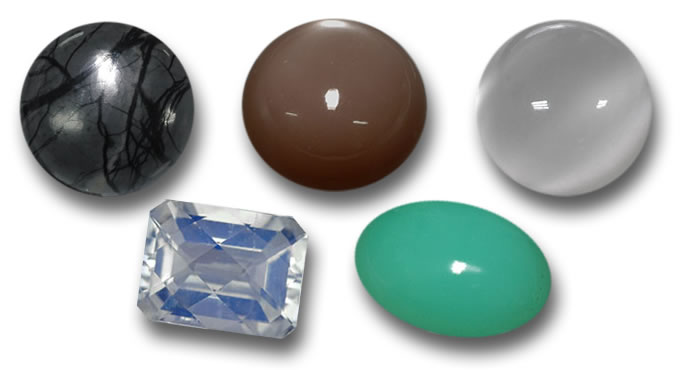 Putting on different gems and stones, as per one’s Zodiacal and Numerological interpretations, is an age old tradition existing all over the world. However, the ritual is much complicated in India in comparison to other countries. Indian astrology has acquired Vedic roots where a number of factors are considered before finally recommending gems and stones to the believers.

Although the gems found in India are legion, gemologists list 84 stones as a core part of Indian gemology. Subsequently, amongst these, nine stones form the esteemed Navaratna. These are: Ruby, Pearl, Coral, Emerald, Sapphire (yellow or white), Diamond, Blue Sapphire, Gomedha and Cat’s eye.

Again, out of these nine-stones, five are collectively known as Maha-ratnas (most superior gems). These are – Ruby, Pearl, Diamond, Emerald and Blue Sapphire.

It is believed that the purity of the Navaratna (nine gems) is such that they are suitable to almost all persons, irrespective of their horoscope or planetary positions. The nine stones are manifestations of abundant wealth, happiness, fame, longevity, honor and mental peace. Generally, no specific weight is prescribed while wearing the gem, however, its authenticity and flawlessness bear utmost significance.

Determining an auspicious time and day for the wearing is quite important and, if necessary, a havan (ritual fire) or puja is also performed for the same. The gems should be set by a knowledgeable jeweler (in a particular format) either in gold or in silver. 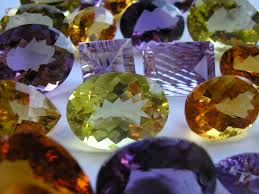 Of pinkish red color, it generally occurs in crystals of six-sided prisms. There are several attributes which decide the quality of the Ruby. For instance, when immersed in milk, the red rays simply breaks or splits the liquid. Again, when rubbed against the stone, the friction may damage the stone; however, the weight of the Ruby must remain intact.

In another example, when reflected against the mirror in the early morning, if the Ruby throws rays on the lower part of the mirror it is of superior quality. Finally, in case, the stone lacks luster, is brittle, has cracks, spotted oris, it is regarded as flawed.

Pearls come in white, black, yellow, salmon pink, blue, red, green and brown. The ones with a pinkish luster are the most popular and expensive. They come almost exclusively from the Persian Gulf. Although, the Pearl is organic in nature, it is composed of minerals and occurs in the Pearl oyster every year during the two spawning seasons. The luster of the Pearl is dependent on the layers of the ocean beds. There are two major centers for Pearl diving in India. These are located off the southern coast of Tamil Nadu and Andhra Pradesh. A Pearl with cracks on the skin is considered flawed, a jointed facade, a mole. It is very lusterless and contains mud or other material inside.

A Coral is generally red or sindoori (vermilion) in color. The use of the coral in jewelry dates back to the Romans who considered it auspicious if worn in amulets. Owing of its auspiciousness, the Coral, though not a precious stone, has been given a coveted place in the Navaratna. A good Coral is opaque red, is perfectly round or oval and regular; is smooth and gives off lovely splendors. A Coral is defective if it is cracked; spotted; has either double or multiple shades; or the surface is in any way depressed or twisted. 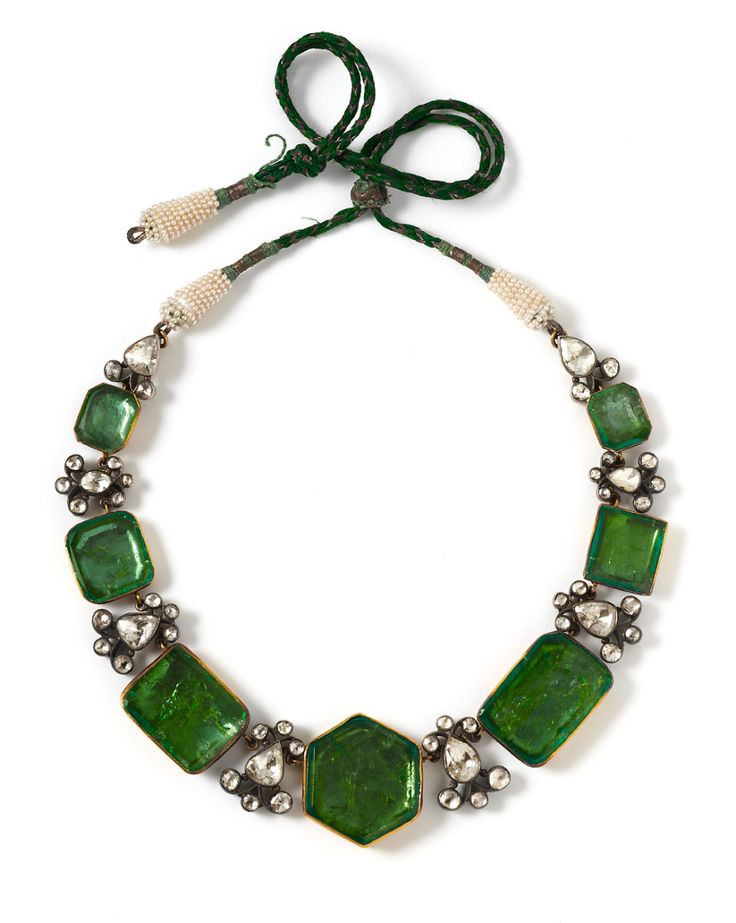 An Emerald is basically velvety green in color; most Emeralds are blemished by inclusions and cracks which greatly diminish their value. A flawless Emerald, like a flawless Ruby, is extremely rare and valuable. The usage of stone is as old as 1st century AD as the famous Roman author, Pliny (23 AD – August 25, 79 AD), was writes about Emerald, “Neither dimness nor shade, nor yet the light of a candle causes them to lose their luster.” The Udaipur Emerald has a dark green color but is brittle. The Ajmer Emerald, on the other hand, is of a paler shade. The most coveted Emerald is that which is smooth, radiant and without cracks or dots.

A Sapphire is either yellow or white in color and is also famous called Pushparaj. The purest form of Sapphire generally possesses eight main qualities: it feels quite heavy when kept on the palm; appears clean, pure and completely spotless; weighs solid without any layer; has a yellow hue; feels smooth to touch, and its radiance perks up when fretted on a testing stone. A Pukhraj or Pushparaj with blemishes like asymmetry, a blackish tinge, blots or a whitish-yellow coloring is considered inauspicious and is not used in jewelry.

There is a belief that Diamonds are of three kinds: male, female and eunuch, of which the male is considered the best. Another opinion is that Diamonds are ranked according to their radiance and structural splendor. It should be graded on the basis of four varnas; Brahmin, Kshatriya, Vaishya and Shudra. A typical male Diamond is the one which light and round, reflecting all the seven rainbow colors. It also vivdly exhibits all eight facets without showing any lines or dots as such. A defective or blemished Diamond is said to cause great harm.

The best Blue Sapphires are originally found in Kashmir. They are called ‘mayur neelam’ meaning peacock blue. Its most significant quality is that it doesn’t change color but instead throws off a navy blue shade when exposed to electric light. An auspicious Sapphire should be radiant, brilliant, crystal clear, and soft to touch. It gives off rays from within its body. The Blue Sapphire, however, is not supposed to suit all kinds of temperaments. Despite its purity and preciousness, it may not be universally auspicious.

Gomedha has the color of red smoke or honey. Also called zircon, chemically it is a silicate of zirconium and crystals and occurs either as a four-sided prism or as water pebbles. To be considered lucky, the stone should illumine a pure color, be homogenous and smooth to touch. If it displays a black radiance, is quite rough to touch, and looks resembles a yellow glass piece, the Gomedha is unlucky. Gomedhas from Sri Lanka are world famous and are of the best quality. Good quality Gomedhas are also found in Bihar, Kulu, Shimla, Kashmir and Coimbatore, in India.

A Cat’s eye is also called Sutramani. It is either blackish or yellowish in color with a lustrous band inside. The band is the most interesting part of the stone, and it moves when the stone is turned. Good quality gems are mostly found in Tiruvananthapuram (Kerala), India. The brilliance and straightness indicate the superiority of the stone. The ones that have depression, spots, web or dullness are considered flawed and inauspicious.

According to Hindu mythology there are three kinds of gems – those which belong to Swarga-loka (heaven), to Patala loka (hell) and to Mrityu-loka (valley of the dead). Under Swarga-loka, there are four gems. These are –

The serpents that inhabit Patala-loka have their own precious gems in black, blue, yellow, green, white, red, pink and milky colors. All precious and semi-precious stones known on earth are those of Mrityu-loka.

Gems can be embedded in different ornaments including finger-rings, amulets and armlets. They are generally prescribed in accordance with the Date-of-Birth and Sun-Sign of the person. However, opinions on this vary greatly and individuals are advised against investing in a precious or semi-precious stone unless they firmly believe in their efficacy.

Auspicious for Muslim saints, also regarded as a birth stone

2018-01-29
Previous Post: Hindus urge Switzerland Govt. to mandate listing of gelatine source on food, which many times is beef
Next Post: Yoga- for healthy mind, body and soul