It is generally observed that it is the skill and dexterity of a potter that defines the shape and quality of a pot. Women have always played a strong role in the history of India. There have been many rulers throughout the world whose lives have been shaped by the strength and guidance of their mothers. In India one such famous ruler was the legendary Maratha ruler Chhatrapati Shivaji whose mother Jijabai was the embodiment of strength and confidence and nurtured his early years with a firm hand and a keen eye. She became a source of inspiration for women all over as one who kindled the heroism in Shivaji making her an epoch making mother who occupies a proud place in shaping the history of the land. 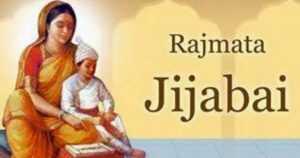 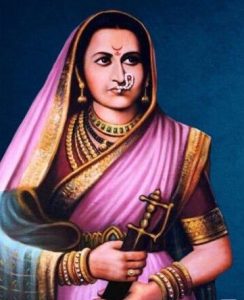 Jijabai was born in the year 1598 in the Sindakhed territory (present day Buldhana district of Maharashtra). Her parents were Lakhojirao Jadhav and Mhalasabai. Her father served under the Muslim administration of the Nizams. Right from birth she was exposed to the bravery and courage of her father. Her mother narrated to her inspiring stories of valour and bravery and encouraged by these tales she pleaded with her father to be sent for armament training, sword fighting etc. Her father realising his daughter’s desire agreed to this decision.

Society prevalent at that time

During this time the Maratha Sardars served under the Nizams. According to their abilities they found favour and positions under the Nizams and obtained land, wealth and small armies of their own. Though they served the Nizam faithfully they were in keen competition with one another thus alienating members of their own clan many a time through hatred and jealousy. They were also highly conscious of the status bestowed on them by the Nizam and would only mix with those of the same rank.

Turn of Events and Marriage

According to legends once little Jijabai was playing with a young Shahaji who was the son of one of the soldiers named Maloji under Jadhav Rao. When someone commented they were a handsome couple, Jadhav Rao refused on the pretext that his daughter could never marry someone of lesser status than him. This angered Maloji who left the employment of Jadhav Rao and returned to his native village full of fury and agitation at this insult. One night it is said that he was blessed by a dream in which a Goddess appeared before him stating that she was the protecting deity of his family and a hero would be born in his clan and he should stop worrying and go forth in action. On waking up Maloji was filled with a new strength and vigour and taking a spade he went to his fields and began digging. Suddenly there was a metallic sound and he found a pot full of GOLD

mohurs. On further digging seven pots of gold were found in all. With tears of joy he humbly offered salutations to the Divine Goddess and rushed home. He purchased horses and built a huge army. He then began using his wealth for noble purposes. He dug wells, built rest houses, renovated temples and fed the poor and needy. His fame and generosity spread far and wide and reached Jadhav Rao’s ears. The Nizam too was keen on befriending him and made him a Sardar and compelled Jadhav Rao to give his consent for the wedding. Though Jadhav Rao agreed he continued to nurse hatred towards Maloji.

After Maloji’s death Shahaji became Sardar and continued to serve the Nizam. He was courageous and heroic. Inspite of his marriage with Jijabai her father continued to harbour hatred and enemity towards him and his family. Jadhavrao left the Nizamshahi and joined the Moghuls. This created great sorrow in Jijabai’s heart as she found her father and husband totally involved in serving the Muslims. Her husband understood her anguish but he could do nothing in the prevailing circumstances. Meanwhile the Mughal Emperor Shahjahan invaded the Nizam’s kingdoms. Shahaji was one of the Sardars defending the kingdoms. Taking advantage of this Jadhav Rao joined hands with Shahjahan and attacked the Mahuli fort to destroy his son in law. Having no choice Shahaji escaped from the fort with Jijabai who was enceinte. But Jadhav Rao pursued them among dangerous slopes and Jijabai having no option forced Shahaji to escape leaving her behind. She was then caught by her father who begged her not to suffer on behalf of her husband and return home safely in his palanquin. But Jijabai stood undaunted. Defying her father she told him that after her marriage the husks from her husband’s house were tastier than the riches of food from her father’s house. Chiding him she stated that he had sold his soul to the Moghuls and betrayed his own Maratha clan. Jadhav Rao had no option but to leave her in the woods. One of Shahaji’s trusted lieutenants then took her safely to the nearby Shivaneri fort on her request. Sitting in front of the idol of Mother Jagadambe she would pray for strength in uniting the Marathas and ending Mughal supremacy. Her anger at the lack of self pride of the Marathas geared her to ponder deeply. She would read the epics of Ramayana and Mahabharata and pray for a son as valiant as Bhima or Arjuna.

Meanwhile she also began to study the intricate political situation and acquainted herself with all aspects of the situation. All her well wishers gathered around her. They were amazed to find that instead of the usual desires of a pregnant woman like pickles etc she would insist on climbing forts and discussing political strategies. Meanwhile Jadhav left the Mughals and returned to the services of the Nizam. But the Nizam’s Sardars were enraged at this and killed Jadhav and his three sons. Jijabai was heartbroken at the destruction of her entire family. Her mother and sisters in law performed Sati and died on the funeral pyre. The Nizam had no faith in Shahaji so he joined hands with the Moghuls. The Moghuls feared Shahaji and so they sent him away from the Sahyadri region and appointed him Sardar in Karnataka. Jijabai was filled with fear for the life of her husband as news that Maratha families were being wiped out reached her. Temples were being destroyed and young girls carried away. Jijabai was furious to hear these reports.

Soon Jijabai gave birth to a son and named him Shivaji. She prayed that he would become brave and courageous and put an end to the lack of shame and fear that made up the life of the Marathas and herald an era of self respect and liberty. Meanwhile Shahaji had proclaimed her Queen Regent as he had to settle down in Karnataka as per the Mughals treaty. He is said to have remarried there. To ensure the safety of Jijabai and Shivaji he asked them to stay in Pune along with his trusted lieutenant Dadaji Kondeo. At Pune Jijabai was shocked to see the destruction of the temples, shrines and villages by the Moghuls and set about rebuilding Pune again. Dadaji assisted her wholeheartedly and along with Jijabai was a great instrument in the upbringing of Shivaji.

Jijabai inspired Shivaji from a very young age with tales from the epics and Puranas. She taught him to serve holy people and befriend all irrespective of class including the poor boys who ultimately became his trusted companions in his fight for freedom. His mother’s strict justice, sense of fairplay and duty were deeply ingrained in him. Jijabai settled disputes and from a young age Shivaji observed carefully the political discussions and administering of the kingdom by Jijabai and Dadaji Kondeo. Pune prospered under her able administration. Inspite of Shahaji’s preoccupation with his new family and the physical distance between them Jijabai did not lose heart. She laid emphasis on love for the country and upholding of truth and righteousness in society in Shivaji and set the foundation of Shivaji’s great life. Slowly Shivaji began taking major decisions on strategies and policies but he would always seek the guidance and wisdom of his mother.

Jijabai was a woman of great courage and foresight. She had to face a number of difficult situations like Afzal Khan’s challenge, her capture and subsequent release, the death of her other son etc. But she bore them bravely and took logical decisions for the betterment of the people. She brought back many Sardars who had earlier joined the Mughals and instilled in them a love for their clan through patience and compassion. She treated all Shivaji’s companions as her own children and spurred in them courage and a sense of loyalty. She wept with sorrow at the death of the brave warriors like Tanaji Malusare, Baji Prabhu etc. Shivaji too reiterated his mother’s faith and trust in him and bravely captured many forts and became a thorn in the side of the Mughals with his guerrilla tactics and lightning attacks. Later Jijabai got Shivaji married and lovingly watched over his family. She prayed for the safe return of both Shivaji and his son Sambhaji when they were forced to go to Agra at the invitation of the Mughal Emperor Aurangzeb and they cleverly thwarted his attempt to capture them and returned home safely. During this time she took care of the administration ably until his safe return. On her husband Shahaji’s death she was prepared to perform Sati but was dissuaded by her son. She crowned her son Chhatrapati at the Raigad fort and paid homage to all the heroes who had given their lives to make this dream possible.

She was crowned Rajmata but could not savour the fruits of her labour as after twelve days of the coronation in the year 1674 she passed away relieved that her dream of a Hindu Rajya upholding the principles of peace and justice had come into existence.

Today Raigad is considered sacred and several statues of Shivaji and Jijabai are erected there highlighting the bond shared between them. Her Samadhi has been built at village Pachad near fort Raigad.

A commemorative stamp has been issued and a number of movies have been made and books written honouring her selfless love for her country and devotion to the cause.

Jijabai’s sterling qualities of fortitude, courage, self respect and a strong sense of duty was implanted in Shivaji making him a great King imbued with the ideas of fair play, justice and tolerance. She gave up riches and wealth and suffered in ruins to achieve her ideals. Her vision of ‘Hindavi Swaraj’ was the backbone of Shivaji’s life and mission. Her saga of bravery and love for the motherland has given her a supreme place in the history of India encouraging women and inspiring generations to come.