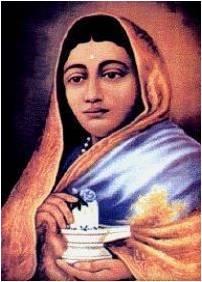 The picture of Hindu Society generally painted by Western Media has been one of suppression and repression of Hindu women and this view of women being forever secluded from public life has deeply penetrated into the minds of the people both in India and elsewhere. Many facts prove otherwise-The right to vote was given to women in India much before their counterparts in Britain. Many women saints of Ancient India composed religious hymns, property has been passed down traditionally to women in some parts of the country rather than to men and Hinduism is the only religion that could conceive of the idea of the Supreme Being as being a female. There have been women-centric problems in India but as history shows this holds true for all the societies in the world. There have been many women who have achieved fame and renown and are recollected with pride and fondness for their great achievements. One such figure is Rani Ahilyabai Holkar whose rule in the kingdom of Indore is remembered as a golden age in the history of Indore which was then part of the wider Maratha Empire.

Ahilya was born in the village of Chaundi in the present day Ahmednagar district in Maharashtra on 31st May 1725. She was from the Dhangar(Dhangad) community or the herding caste. Her father was Mankoji Shinde, the Patil or Chief of the village. In those days women did not go to school so her father taught her to read and write. Once, Lord of the Malwa territory and Commander in the service of Peshwa Bajirao, Malhar Rao Holkar stopped in Chaundi village on the way to Pune and it is said that he saw Ahilyabai who was eight years old at that time at the temple service in the village. He recognised her piety, nobility and strength of character and decided to take the girl to the Holkar territory and get her married to his son Khande Rao who was not a man of very strong character. Thus her entry into the history of India is said to be totally accidental. In 1737 she was married to Khandoji and by this time her father in law Malhar Rao Holkar became even more famous, rising both in fortune and fame. He built a palace in Indore and encouraged merchants and traders to settle there. He developed Maheshwar a town on the banks of the Narmada River by promising land and houses to the merchants and his officers, weavers and craftsmen. He even issued a warrant of protection to help them feel safe and secure. Later on Ahilyabai selected Maheshwar as her capital and made the place famous. Various grants from the Peshwa and rich tributes exacted from the Princes of the nearby kingdoms for helping them made him very rich and master of extensive lands including forts and grounds. But the death of his only son deeply saddened him. Determined not to cower down he recognised in his daughter inlaw Ahilya the abilities required and so trained her in matters of State and governance. He kept her informed on all political aspects, advised her and a number of letters have been found by historians where he advised her on various aspects which have been recorded. He asked her to weigh and judge the strength of the enemy before taking any decisions and asked her to use the Maxim ‘Least power and greatest weight’. After his death her son was made King but he ruled only for eight months after which he too was killed in battle. She then requested the Peshwa to allow her control of the kingdom and the Peshwa agreed.

Ahilyabai was just and fair. She was accessible to anyone who needed her help and held daily public audiences. She appointed Tukoji Rao Holkar as chief of the army. Due to her skilled handling of legal affairs, she continually referred cases to courts of arbitration and equity when necessary and her territories of Malwa were not disrupted or attacked in spite of wars all around and her reign was most stable. She retained the same set of ministers and administrators throughout her reign which gave her their undivided loyalty. Her sense of fair play stretched to everyone and she always pulled up those in her service who were unfair on untruthful in their dealings. She was fair, forthright and gentle-minded in all affairs of the state. Due to her devout nature, purity of heart, calmness of spirit and honesty of purpose everyone listened to her with reverence and obeyed her implicitly. She did not impose new rules and regulations and used only ‘common sense backed by religion’ to make her people happy and contented. While there were wars, instabilities and turbulence all around, Ahilyabai used diplomacy and statesmanship, thus her rule was known for its peace and tranquillity. Her thirty years of rule also showed an increase in the revenue of the state. 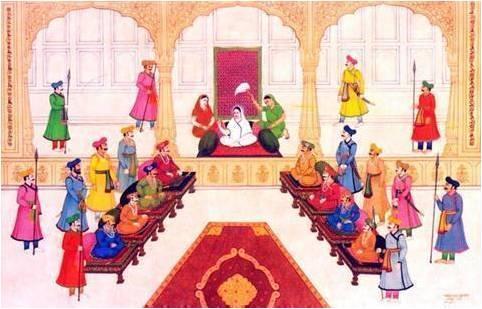 Her daily routine began an hour before daybreak with prayers. The scriptures were then read to her after which she gave food to a number of Brahmins and distributed alms. She practiced vegetarianism and after breakfast she prayed again and then took a short break. She attended durbar from two to six and after a light meal and religious exercises, from nine to eleven she attended to business. She respected all religions but her devotion was to Lord Shiva. All royal proclamations were always accompanied by her signature and the words ‘Shri Shankara’’ on it. To reduce crime and theft, she encouraged the poor to practice trading and farming. To protect travelling merchants from harm, she employed forest tribes to protect them and paid them well so they would not resort to robbery and thieving. She was an epitome of humility and never encouraged books or poems in praise of her that were often written by the learned men in the state.

It is said that the Supreme Ruler The Peshwa wished to confiscate the excess wealth of Indore but Ahilyabai was adamant that the wealth was to be used for charitable purposes or for the welfare of her subjects. Angry that she had defied him the Peshwa threatened military action but she challenged him to come and face her on the battlefield. She gathered a small army which included many women and sent a message to the Peshwa that she being a woman would lose nothing if she lost the battle but if he being a man and the Peshwa lost against women it would be disastrous for him. The Peshwa had a change of heart and reassured her that he meant to come and stay in her house as a guest and had no intention of any fight. After staying in her house he was impressed by the skill with which she ruled and the poise and equanimity that she possessed.

She developed Indore and made it a beautiful city. She built roads and forts in Malwa, gave donations for many Hindu temples and sponsored festivals. She built tanks, guest houses, wells and temples at her own cost. She helped widows to retain their husband’s wealth and she even allowed them to adopt children. She made her capital Maheshwar the scene of musical, artistic, literary and industrial enterprise by patronising the Sanskrit scholar Khushali Ram and entertaining the famous Marathi poet Moropant and Anantaphandi from Maharashtra. She established a textile industry in Maheshwar and gave salaries and honours to sculptors, craftsmen and artists. She was overjoyed when the bankers, traders etc became affluent with her help and never staked a claim in their wealth. She worked for the welfare of all high or low and using a strong hand and a wise head, she achieved unparalleled peace and prosperity everywhere in her state. She organised a good postal system and families of Soldiers who were loyal and died in battle were always taken care of. She honoured all those who served the state like clerks, officers etc.

Ahilyabai was a devout Hindu and the Holkar State Records of her Charities and Construction Works show a great number of Dharamshalas, temple, shrines, ghats and idols all over India, so much so that if there is an ‘unnamed or unregistered’ temple or ghat , it is attributed to her, so synonymous did her name become with charitable institutions.

Ahilyabai Holkar passed away at the age of 70 years on 13th August 1795 in Rameshwar.

An English poem written by Joanna Baillie in 1849 reads:

“For thirty years her reign of peace,
The land in blessing did increase;
And she was blessed by every tongue,
By stern and gentle, old and young.
Yea, even the children at their mothers feet
Are taught such homely rhyming to repeat
“In latter days from Brahma came,
To rule our land, a noble Dame,
Kind was her heart, and bright her fame,
And Ahlya was her honoured name.”

Ahilyabai Holkar was also referred to as the Philosopher Queen and was often compared to Margaret I of Denmark, Elizabeth I of England and Catherine II of Russia. In memory of her bravery and greatness, the Republic of India released a commemorative stamp on 25th August 1996. In 1996, the Indore Government too instituted an annual award in her name to be bestowed to an outstanding public figure. The Indore domestic airport has been renamed the Ahilyabai Holkar Airport and the Indore University too has been renamed as Devi Ahilya Vishwavidyalaya in her honour. The timeless testimonies of her beneficence that she has left behind give glimpses of the reason for her reputation in Malwa and Maharashtra being that of a saint and not merely a warrior Queen and she was also referred to as a Karma Yogi and a Raja Yogi. Her piety, her keen interest in all her people, her administrative ability and the landmarks she has built all over the country will always be remembered with gratitude for generations to come.