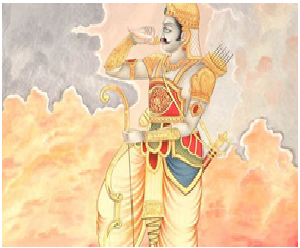 Dhrishtaketu, was considered to be a righteous ruler, who ruled the chedi kingdom in a well-versed manner. He laid only a lower amount of tax, and solved the problems of his people immediately. During his rule, no one was suffered from poverty, hungry and diseases. Everyone liked him and lived in a peaceful manner. Crops were cultivated properly, and rain was showered during all the seasons. People considered Dhrishtaketu as their own father, and treated him with great respect.

Dhrishtaketu was a friend of Lord Krishna, and he was also a favourite person to Lord Krishna similar to Arjuna. Both of them had discussed about Puranic stories and had feast in both of their palaces. When Krishna met Rishi Uthanka and showed his Viswaroopa darshan to him, he was also present there and had seen the gigantic form of Lord Krishna, and worshipped him. When Pandavas went on exile, he was very much worried about that.

Lord Krishna had advised him to follow the path of righteousness, and as per that, he lived a pious life. He had given food to the hungry people, constructed food shelters and resting places throughout his kingdom. He also maintained good relationship with other kings, and treated everyone as his friend. Dhrishtaketu died in the Kurukshetra war, and after his death, due to the grace of Lord Krishna, he went to the Swarka Loka, the abode of Lord Indra, and living there by enjoying all kinds of heavenly pleasures.