Music and dance course through the veins of the people of Goa. It does not require any formal occasion for a Goan to break into a song. Music rules in the heart of every Goan.  Goa is rich in traditional, folk and western music including Hindustani music and pop music. Due to the Portuguese rule, elements of western music crept in. The trance parties on the famous beaches of Goa introduced by the hippies brought in trance music. 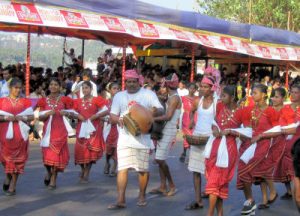 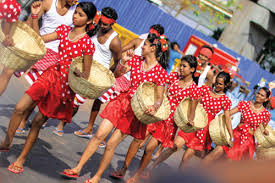 The music of Goa is basically divided into two main categories, Hindu and Christian. Ancient treatises on music like Sharanga deva’s Sangeeta Ratnakara makes a mention of some of the elements that are present in the music of Goa. Bhajans and kirtans form part of the popular Hindu music scene of Goa. Portuguese influence has enriched Christian hymns and folk music of Goa.

Carnivals of Goa that include vibrant music with rhythmic beats and peppy tunes are a perennial delight. The folk music of Goa can be classified into more than 35 types. Some of them are –

Mando-This is a popular traditional form of music in Goa. Here the music is usually a chorus for a dance that is celebratory in nature and which is accompanied by a lively dance which is akin to ballroom dance.

Dhalo– These are traditional songs sung during marriages.

Duvallo – it is a song sung during pregnancy.

Ovi – These are songs with nuptial themes and were sung by Christian missionaries as devotional and liturgical hymns. This is also celebratory in nature as it is sung during weddings when associated rituals are being conducted. The women folk sing the traditional songs celebrating prosperity, good life and happy times ahead.

Suvari-this is instrumental orchestra that is an integral part of religious festivals and special occasions involving rhythmical beat using traditional instruments like harmonium and cymbals.

Launim – These are songs with themes of religion and mythology.

Talgarhi – These are theatre songs performed by wandering minstrels with satirical themes on local politics and problems in society.

Palnaam – These are lullabies or songs sung to soothe babies in cradles.

Banvarh – It is a mourning song sung by Hindus on the day of cremation.