Neem is known as “Sarvo Roga Nivarini” – the cure of all ailments. Neem is Nimba in Sanskrit. It belongs to the Mahagony family, Meliaceae. The tree is native to India, and is found in Nepal, Pakistan, Bangladesh and Sri Lanka. Neem is known by many different names, such as Nimm (Punjabi) Arya Veppu (Malayalam), Azad Dirakht (Persian), Nimba (Marathi), Margosa, Neeb (Arabic), Nimtree, Vepu, Vempu, Vepa (Telegu), Bevu (Kannada), Kohomba (Sinhala), Vembu (Tamil), Tamar (Burmese), and Indian Lilac in English. Neem is popularly known as “the tree of the 40”, as it is effective in treating 40 different diseases.

Neem is known as a wonder tree since time immemorial. Neem is an ever green tree which grows to a height of 15- 20 meters. The branches are wide and spreading. Neem trees are suitable to be grown in tropical and semi tropical regions. The leaves are medium to dark green growing up to 3- 8 cms in length. The tree is known for its survival even in drought like conditions. Neem tree is grown in any type of soil and is suitable to be grown in very high temperatures. Neem is one of the very few trees which provides shade in drought prone areas like the dry coastal and southern districts of India.

Neem tree bears white aromatic flowers. The male and the female flowers co-exist on the same tree. The Neem fruit is smooth and is either elongate oval or round in shape. The skin of the fruit is thin and the pulp tastes bitter sweet, and is yellow- white in colour. The pulp is very fibrous. Within the fruit is the seed, usually one seed, sometimes more than one in a brown seed coat.

Neem tree is considered as a manifestation of goddess Durga or Maa Kali. The tree is also referred to as Neemadri Devi.

Neem tree is considered sacred to Sitala or Shitala goddess. Shitala means ‘who cools’ in Sanskrit. She is said to reside in the tree. Sitala or Shitala is often referred to as “Maa”, Thakurani, Jagrani, Karunamayi, Mangala, Bhgavathi and Dayamayi in North India. In South India, the goddess is referred to as Mariamma. The goddess is mentioned in Tantric and Puranic texts.

According to another puranic reference, Lord Indra, the god of the Devas, spilled the nectar, (during Samudra Manthana or The Churning of the Ocean after snatching the pot of nectar from the demons) on the Neem tree which made the tree a panacea for all ills.

In yet another reference, Neem protects mankind by killing or weakening the insects (which are believed to be a creation of demons). 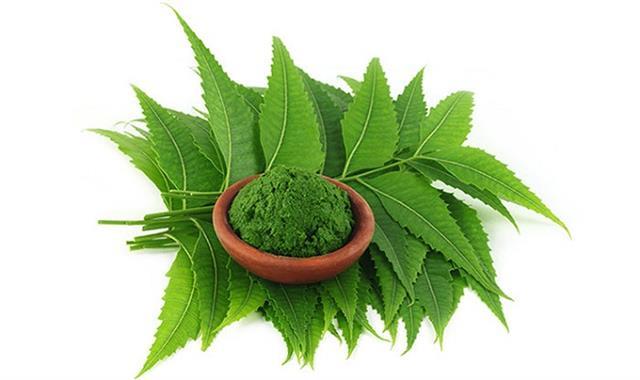 Varahamihira (505 AD) in the ancient text, Brihat Samhita, considered, as the encyclopaedia of Indian Culture has recommended the use of Neem for medicinal uses. There is a popular ancient saying- “nimbati ivasthyamdadati,” or “Neem, to give good health.” which aptly describes the qualities of Neem.

The bark, leaves and seeds of the Neem tree have immense medicinal properties. The root, flower and the fruit are also used sometimes in ayurvedic preparations. Neem has antifungal, anti diabetic, anti bacterial, antiviral, anthelmintic, contraceptive and sedative properties. Neem has anti cancer properties. Neem leaf or bark is effective in treating pittha doshas. Neem oil which is extracted from Neem fruits and seeds is used in toiletries like shampoo, soap, lotions etc. 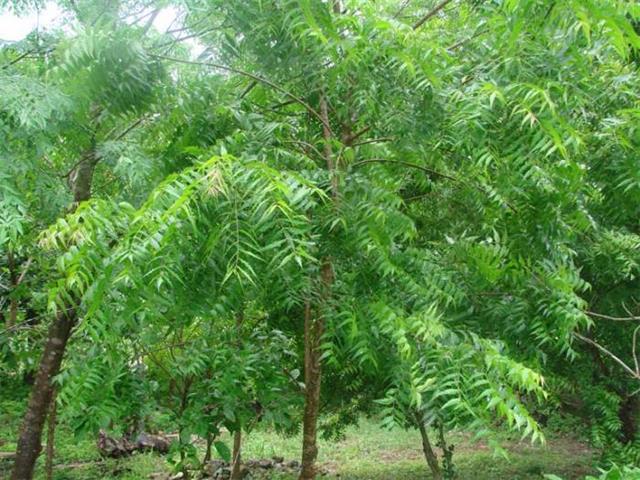 Neem leaves is also used as a mosquito repellent. Azadirachtin is the main ingredient found in Neem which makes it use an effective alternative for synthetic pesticides

Neem bark: The bark which is brown to grey in colour is effective in the treatment of stomach ulcers, skin ailments, malaria, fever and general body ache.

Flowers: Flowers are used to reduce the bile production in the body, reduce phlegm, and in treating intestinal worms. 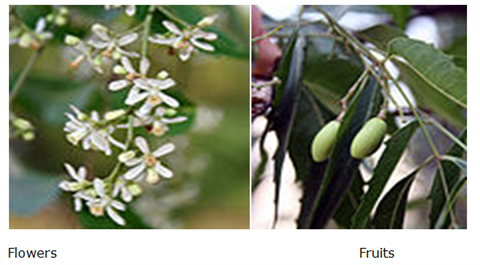 Neem oil is used to purify the blood and treat diabetes.

Neem Seeds: Seed and seed oil are effective in the treatment of intestinal worms and leprosy. They are also used in case of birth control and to cause abortion. Neem seeds are ground into fine powder and soaked overnight. This solution when sprayed on the crops is effective in controlling pests. Though the Neem solution does not kill the insects directly, it acts as a deterrent for the insects, thereby protecting the crop.

The stem, root bark, and fruit are used as a tonic and astringent. 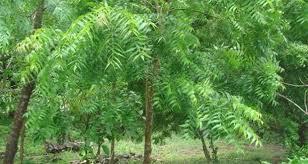 Neem tree is planted next to a Peepal tree and a marriage ceremony is conducted for both the trees. The Neem tree symbolises male energy and Peepal, female energy. A Neem fruit is placed on the Peepal leaf symbolising the holy union. A platform is built around the trees, on which inter twined images of the snake are placed. Inter twined snakes symbolise fertility.

Ugadi (Hindu New Year), is celebrated on Chaitra Shukla Padya (1st day of the new year- March- April) in the States of Karnataka and Andhra Pradesh. During this festival, the front door is decorated with Neem and mango leaves to ward off negative energy and evil spirits.

On the day of the festival, tender Neem flowers mixed with jaggery is consumed. This is to symbolise that life is a mixed bag of sweet and bitter. Following is the shloka chanted while eating the Neem leaves.

Meaning – The Neem leaves are eaten for the sake of a body which has longevity of hundred years, and which is as strong as diamond, for bestowing all prosperity and for annihilating all the evil things.

As the weather changes with the onset of summer during March- April, neem is consumed to keep fever at bay.

In Maharashtra, on Gudi Padava, the New Year, people drink Neem juice before starting the festivities.

The Jagannath idols of the famous Puri Jagannath temple, Orissa are made of Neem heart wood along with other essential oils and powders.

In Tamil Nadu, women dress in red colour sari or dress and carry branches of the Neem tree and dance in public places swishing the branches symbolising an act of purifying the world.

Neem gum is a rich source of protein. Hence the tender shoots and flowers are used in recipes.  Pat Gosain festival is observed in Bengal when, women worship the Neem tree. On the day of Vaishaka Shukla Saptami, women eat Neem leaves, as part of a ritual.

In West Bengal, a recipe known as Nim Beigun is prepared using tender Neem leaves and Brinjal. The Neem leaves are fried in oil along with small pieces of Brinjal and eaten with rice. This is the first dish to be served, as it is believed to be an appetizer.

It is also believed that anyone who plants three Neem plants will live in Suryaloka after death.

A special puja is held on Chaitra Navaratri when prayers are offered to the Neem tree, symbolising the worship of goddess Shitala.

New born babies are bathed in water that has been boiled with Neem leaves; as such water is rich in medicinal properties and has a refreshing effect.

At funerals, the Puranas urge that family and friends chew Neem leaves to protect against lingering infections, and spread more leaves at the threshold of the house where the death occurred – a tradition based on Neem’s healing powers and dating back to the days when many people died in epidemics.

In many villages, a festival called as ‘Ghatasthapana is observed, when Neem leaves are used to sanctify the water pot.

Mahatma Gandhi used to conduct prayer meetings under a Neem tree in Sabarmati Ashram. Neem leaf chutney was part of his daily diet.

In Vrukshayurveda, the science of plant life mentions the importance of growing a Neem tree as below.

After planting Neem trees a person well-versed in dharma attains the abode of Sun. Indeed! He resides there for a long period.

The Gurjars of Rajasthan plant and worship the Neem tree. They consider the Neem tree as the abode of God Devnarayana.