Himachal Pradesh meaning ‘in the lap of the Himalayas’ or ‘land of snowy mountains’ is also referred to as Nature’s Paradise or Dev Bhumi. It is famous for its abundant natural resources and scenic beauty. The culture in Himachal Pradesh is a rich mix of Hindus, tribes like Kinnars, Gaddis, Gujjars, Buddhists, Christians and Muslims. As it is bordered by Jammu and Kashmir, Punjab, Haryana, Uttarakhand and Tibet, the culture of Himachal Pradesh is extremely varied and deeply influenced by all these cultures.

Himachal Pradesh is famous for many forms of paintings which come under the umbrella of Pahari paintings. These paintings are miniature paintings and book illustrations which developed and flourished during different centuries and were characterised by various schools depending on the genres. They are- 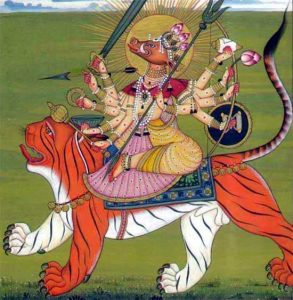 These paintings are named after Kangra, which was a former princely state of Himachal Pradesh. They were patronised by Rajput rulers between the 17th and 19th century notably the then Maharaja Sansar Chand. Since this art originated in the twin townships of Haripur and Guler and formed the cradle of Kangra paintings, these paintings were also referred to as Guler paintings. The Maharaja was an ardent devotee of Krishna and hence the main theme of the paintings revolved around the eternal love of Radha and Krishna. The other themes were instances of Lord Krishna’s life taken from the Bhagavata Purana, Jayadeva’s poems, stories of Nala Damayanti.  The painters use colours made of mineral and vegetable extracts, and their lyrical blending of colour and form have made them world famous.

These paintings originated from the town of Chamba in Himachal Pradesh from where they derived their name. They are similar to Mughal style of paintings with strong influences of Gujarat and Deccan styles and were patronised by the Chamba rulers like King Raja Jai Singh and Raja Udai Singh. Basohli is a town in Jammu and Kashmir from where the Basohli paintings evolved in the 17th and 18th centuries. Later the style spread to the neighbouring state of Himachal Pradesh. It was a fusion of Hindu mythology, Mughal miniature techniques and folk art. They were patronised by the Pal rulers like Raja Kripal Pal and were characterised by a strong use of primary colours, red borders, rich symbols, and bold lines, striking faces with great expressive lotus shaped eyes.  The faces of the figures painted are marked by receding foreheads and large eyes. Trees are often depicted in circular form and the landscape is stylised. The most popular themes are from Jayadeva’s Gita Govinda, Shringara literature like Rasa Manjari written by Bhanudutta in the 15th century and Ragamala.

These paintings originated in the Garhwal or Uttaranchal region from where it derived its name. They include illustrations of Ramayana, Gita Govinda and their blend of poetry, religion and love with the conceptualisation of ideal beauty and richness of thought making the paintings beautiful and captivating.

Thangka Painting is a famous art in the town of Tawang in Arunachal Pradesh consisting of a picture panel painted or embroidered on silk appliqué or cotton usually depicting a Buddhist scene or Mandala or deity. The meaning of the word ‘Thangka’ is ‘recorded message’. They are like scroll paintings which are delicate in nature and long lasting and care has to be taken that moisture does not affect the quality of silk hence they have to be kept in dry places. They are important teaching tools as they are visual representations of the teachings of the Buddha, various Lamas and other deities and are used as a religious tool to help further mankind on the path of enlightenment. Depending on the content and design there are many types of Thangkas. The subject matter includes Buddha, Bodhisattva, goddesses, religious objects, animals, flowers, stupas, monastic accessories, plants, animals, flowers etc. These paintings are generally commissioned when there is death or trouble or sickness in the family and when there is a need for an image in connection with a particular religious practice. These images are considered as reference points symbolising the various truths and ideals projected externally which has to be internalised to integrate the profound values within the individual’s mind. Hence these paintings are called the roadmap to enlightenment. They have to be precise in measurement and proportion to enhance the religious values and hence the process behind these paintings is very methodical and requires a deep understanding of the symbolism behind it.