Gujarat is one of the oldest states in India and gracefully represents the authentic Indian culture and tradition at its best. Paintings of Gujarat have gained popularity all over the world.

It is believed that the miniature illustration flourished under the Jain patronage in the 11th Century. Even today we can see older Rajasthan and Rajputhana paintings highly influenced by the miniature forms.

The art of miniature painting in the Gujarat region was also promoted by the Sultanate and Mughals of the 15th and late 16th Centuries respectively. The Islamic paintings depict some of the finest religious forms and customs of the state. Some of the erstwhile paintings are still preserved in the museums while the latest ones continue to attract the outsiders in great numbers. 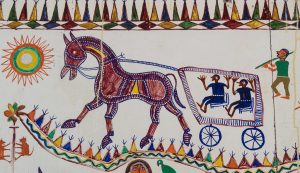 Pithora painting has its roots in nearly thousands year old cave paintings. Widespread mostly in central Gujarat, the Pithora painting is an unparalleled art and tradition of the Rathwa community. The art is totally rustic in its approach, performed at a very crude level by the villagers. The production of this art is confined to men as women are strictly barred from creating Pithora paintings.

Pithora painting is created in order to pay obeisance to God and getting a wish granted from Him. As per tradition, the three walls and verandah (pithoro) of the home are painted with great celebration and rejoicing. During the initial era, animal design was in great trend. But in recent years, paintings of various vehicles and other modern items have also come in vogue.