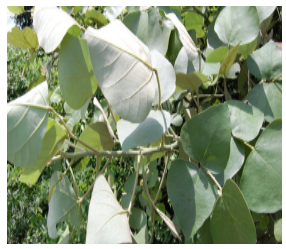 Palasa is native to tropical and sub tropical parts of the Indian Subcontinent and South East Asia. It is found mostly in India, Nepal, Burma, Sri Lanka, Cambodia, Bangladesh, Thailand, Vietnam, Malaysia and Western Indonesia. The tree is found in the plains and slopes of the hills in India. Palasa trees are found in some of the temple premises in Tamil Nadu.

Palasa is a deciduous tree which grows up to a height of 10-15 mts. Palasa is a slow growing tree.

The leaves are pinnate with 8-16 cm petiole (the stalk attaching the leaf blade to the stem) having three leaflets. Each leaf is about 10-20 cms long. The leaves when tender are soft, thick, and velvety. They appear in pale bronze green colour. Old leaves are firm and tough as leather, smooth above and hairy below. The leaves have a leathery texture. The leaves which wither during autumn are filled with bright orange coloured flowers that appear like a flame covering the entire tree. Thus the tree gets the name Flame of the forest.  The flowers also resemble an orange colour net spread over the entire tree, which is referred to as Kimsuka net. 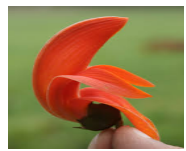 Each flower consists of five petals comprising one standard, two small wings and a curved beak shaped keel. The curved beak shaped keel gives its name as Parrot Tree. The flowers are indicative of the onset of spring season and the colour of love. Jayadeva in Gita Govindam has compared the flowers to the red nails of the Lord of Cupid, Kamadeva which tear at the hearts of the lovers.

The buds sprout from the stems. The wood of the Palasa tree is soft and white in colour. It is used for well curbs (a protective structure used around the rim of a well to prevent objects from falling into it) and water scoops as it is durable under water. 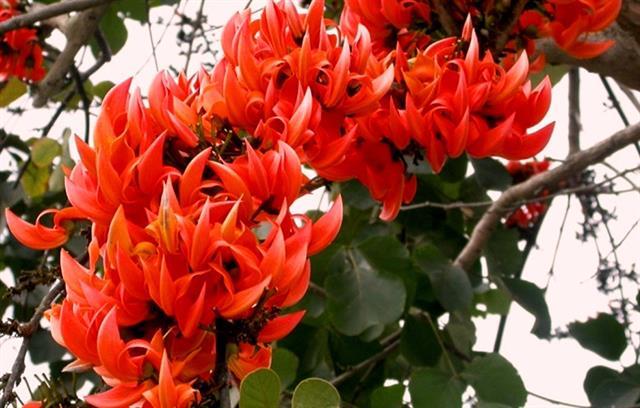 Once all the Devas were discussing the greatness of the Gayatri Mantra sitting under the Palasa tree. The tree heard the discussion and began to grow three leaves at a time. The Devas who were astonished at the sight of three leaves growing, named the tree as “Susravas”, meaning a tree with the best hearing ability. In Vedas it is mentioned as

A brahmachari Vidyarthi should be able to grasp the teachings of the Guru in the Gurukula, just as the Palasa tree. During the thread ceremony, the brahmachari is given a Palasa staff.

Once when goddess Parvati and Lord Shiva were engaged in private moments, the Devas sent Lord Agni in the guise of a Brahmin to spy on them. When Parvati saw Agni hiding behind a tree, She cursed Agni and other Devas to be born as trees. Agni was born as Palasa tree, Lord Vishnu as Aswattha, Lord Rudra as Bel tree etc.

In Mahabharata, Sage Jamadagni performed a sacrifice to the gods in the forest of Palasa.

There is a mention of the Palasa tree in both Ramayana and Mahabharatha. In Mahabharatha it is mentioned that at the time of the coronation of Yudishtira after the Kurukskhetra war, “there were golden jars filled to the brim with water, also jars made of silver, copper and earth, flowers, fried paddy, Kusa grass, cow’s milk, sacrificial fuel consisting of the woods of Sami, Palasa, Pipal, honey, clarified butter and sacrificial ladles made of udambara and conchs adorned with GOLD.”

In the Puranas, it is mentioned that one who makes offerings to the deities in a vessel made out of Palasa wood gets the benefit of the Yagnas. In Garuda Purana, it is mentioned that during Margashira Shukla Trayodashi (13th day of the waxing moon, in the month of December- January) Lord Nateswara should be worshipped with Kunda flowers and Palasa twigs. The tree is considered holy as the leaves which are trifoliate represent the Holy Trinity- Lord Brahma, the Creator in the left, Lord Shiva, the Destroyer on the right and Lord Vishnu, the Preserver in the middle.

The gum which is extracted from the stem is mentioned in the Vedas. Gandharvas and the Apsaras are said to reside in the Palasa tree. Buddhists consider the Palasa tree as sacred, as queen Mahamaya is said to have seized a branch of the tree at the moment of the birth of her son Gautama Buddha. 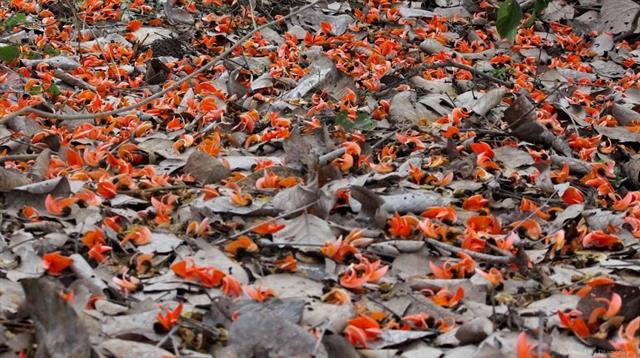 All the parts of the Palasa tree like the leaves, flowers, fruits, seeds, bark and gum are used for medicinal purposes. The tree has been used as a tonic, astringent, aphrodisiac and diuretic. Maharishi Samhita has categorized the tree as anti toxin (visaghna), purifies seminal fluids (sukrasodhana) and astringent and anti-diarrhoeal (stambhana). The properties of the Palasa tree are:

It is used to treat kapha and vata doshas. It can aggravate pitta dosha.

Gum: The gum extracted from the wood known as Bengal Kino or butea gum has astringent and anti diarrhoeal properties.  The gum is rich in gallic and tannic acids.  The gum is used to treat diarrhoea, chronic dysentery, piles, urinary infections, bone fractures and as a diuretic. The extract of the stem is beneficial for sperms and helps in securing conception. The powder of the gum mixed in water and applied with a cotton swab on mouth or throat ulcers gives relief.

Leaves: Leaves having antibacterial properties is used in the treatment of worm infestations, dysentery, amenorrhoea and delirium (general weakness). A concoction of the leaves is used to treat tumorous piles and ulcers. A concoction of the tender leaves mixed with cow’s milk is used as a slow sterilizer (prevents pregnancy). In Atharva Veda, the leaves are used as sex stimulant, thus effective in treating menorrhagia.

Seeds: The seeds contain proteolytic and lipolytic enzymes which find many medicinal uses. The alkaloid palasonin in the seeds is highly useful for treating ring worm infestations. A paste of the seeds mixed with honey for intestinal worms. The seeds contain a yellow fixed oil known as moodaga oil or kino tree oil, besides small quantities of resin, and largely water soluble albuminoid. A paste of the seeds mixed with lime juice is highly effective for treating herpes, eczema, and ringworm or just sprinkling the powder of the seeds on the affected area is an anti dote for ring worm infections on the skin. Seeds are also used as contraceptive.

According to Chakra Samhita, the seeds or seed powder are useful in treating piles, constipation, leprosy, gastroenteritis and menorrhagia. For scorpion sting, a paste of seeds applied on the affected area alleviates pain. The paste of the seeds is a panacea for a host of skin related disorders like eczema, wounds etc. A powder of the seeds mixed with honey is useful in treating worm infestations.

Flowers: Flowers act as diuretic and astringent agents.  Flowers contain glycosides, butrin, butin and neterosides, and a number of fatty acids have been isolated from the oil. Flowers are used to treat infertility, fever, leprosy, diabetes, bone fractures, eye infections and skin diseases. A decoction of the flowers is effective in treating diarrhoea. A mixture of the dried powdered flowers along with milk and sugar acts as a diuretic, thus effective in treating oedema.

The wood of the Palasa tree is used to make utensils or planks used during religious or sacred ceremonies. It is also used as Samith during Yagna or havan. The wood is not used as regular fuel.

Nobel Laureate Sri Rabindranath Tagore has compared the bright orange flowers of Palasa to fire. Kalidasa, in his work, Ritusamhara, describes the Palasa forest as “resembling a blazing fire, making the earth look like a newly-wed bride with red garments”.

In Santiniketan, the abode of Sri Rabindranath Tagore, Palasa flowers are part of the celebrations during spring. A town in West Bengal is named after the Palasa tree as Palashi.  The historic battle was fought in Palashi, which later came to be known as the as the battle of Plassey.

Palasa is the state flower of Jharkhand. In Jharkhand, the Palasa flower is referred to as the forest fire. The flowers are described variously in the traditional folk lore.

A postal stamp was issued by the Department of Posts to commemorate the Palasa flower. In the State of Telangana, the flowers are used in the worship of Lord Shiva on Shivaratri. The second Buddha called Medhankara achieved enlightenment under the Palasa tree. The orange red flowers are offered to goddess Kali and Lord Krishna.The leaves of the tree are used to bless the calves to ensure their becoming good milkers.

In Manipur, when a member of the Meitei community dies and for some reasons, if the body cannot be found, then the wood of the Palasa tree is cremated in place of the body. In Buddhism, the orange colour flower represents renunciation of worldly desires. Thus it is common to see the Penitents (repentant) wear orange robes symbolic of having burnt their worldly desires. 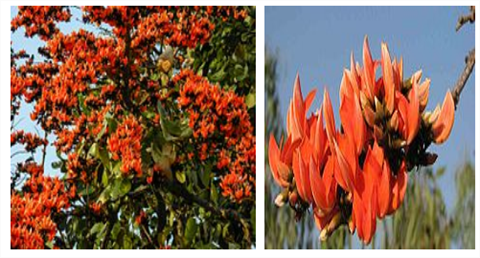 The leaves which are big and broad are sewed together and made into leaf plates and bowls for serving a meal. The gum extracted from the wood, known as Bengal Kino is used in the leather industry as it a rich source of natural tannin. The flowers are used to prepare natural colours used during Holi. It is also used as a dyeing colour for fabric.

Mosquito repellent: The mosquitoes which get attracted to the bright colour and fragrance of the flowers get trapped once they come into contact with the nectar in the flowers. The gum is used for culinary purposes in some parts of India. Dried leaves are used as beedi rolls.

Fertilizers: The ash of the bark is mixed with the ash of cow dung and used as fertilizers on rice fields.

Wood pulp is used in the manufacture of newsprint. The bark is also used as a cheap board wood and for structural work. The inner bark yields a coarse fibre used in boat making. The fibre from the root bark is used to make ropes and strings and caulking (one of the processes of sealing the joints or seams) of boats.

The parrot tree plays a significant role in regulating the atmosphere. It reduces about 75% of dust from one cubic litre of the atmosphere. It also acts as an air conditioner by liberating 10-20 litres of water per day per tree of average height through transpiration.