Parijata is a divine flower revered in India.  The botanical name of Parijata is Nyctanthes arbor-trestis. Nyctanthes means a flower which blooms in the night and arbor-trestis means a “sad tree”. Thus it is also known as the “tree of sorrow”, as the flowers bloom in the late evening and wither with the first rays of sun falling on them at dawn. The tree looks sad in the morning. Parijata is the State flower of West Bengal.

Parijata is a deciduous shrub or a small tree that grows to a height of 10 mts. The leaves are opposite, and grow up to 6-12 cm in length. Its aromatic flowers consist of five to eight lobed white petals with an orange red pin-wheeled stalk in the centre. The flowers bloom in clusters of two to seven together. Flowering season is from June- December. The tree is mostly found in the premises of temples. The flowers which bloom in the evening emanate a refreshing fragrance.

The fruit is flat brown in colour. It is heart shaped or nearly round and has two sections with a single seed in each section. The tree is propagated through seeds or by cuttings.

The tree is a native of South Asia and South East Asia. Parijata is grown in the Himalayan region, Jammu & Kashmir, East Assam, Bengal, Tripura extended up to the central region of Godavari in the South. The tree is also found in Thailand, Indonesia, Nepal, and Pakistan. 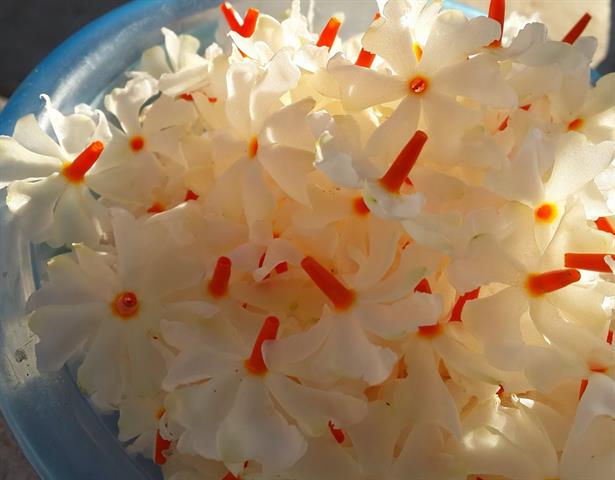 According to Bhagavad Purana, the tree emerged during the Samudra Manthana or the Churning of the Ocean.  During the churning of the Ocean, many objects emerged from the ocean and one among them was the Parijata or the Mandara tree. Lord Indra took the tree and planted it in Deva loka. Sage Narada brought some flowers from Indra Loka and gave it to Lord Krishna. Sri Krishna gave the flowers to his beloved wife Rukmini. On seeing this, Sage Narada, told Satyabhama about the flowers being given to Rukmini. Having aroused enough jealousy in Satyabhama about Rukmini, Sage Narada offered a solution to her problem. He told Satyabhama to urge Sri Krishna to get the Parijata tree from the Indraloka and plant it in her courtyard, instead of few flowers. When Sri Krishna entered Satyabhama’s palace, she expressed her displeasure about the entire incident and insisted that He get the plant from Indraloka.

A Parijata tree located at Kitnur district, in Barabanki district of Uttar Pradesh belongs to the Mahabharata period.

Another reference is that once queen Parijataka wanted to marry the Sun god- Lord Surya. But when the Sun god rejected her love, the queen committed suicide and a tree sprung from her ashes. The tree came to be called as Parijata or Parijataka. Unable to bear the sight of her lover- the Sun god, the tree flowers only during the night and sheds, the flowers (as tear drops) with the first rays of the sun falling on the flowers.

Parijata, the divine tree has immense medicinal properties. Its leaves, flowers, seeds and bark are used in various ayurvedic preparations. The flower is known as Kalpavriksha as it is used as a panacea for several ailments. Extracts of the seeds, flowers and leaves possesses immunostimulant, hepatoprotective antiviral  and anti fungal activities in vitro.

Flowers are diuretic, anti bilious, anti oxidant, anti inflammatory, sedative and anti filarial in nature. The flowers are used as a face pack which makes the skin glow. Flowers are used to treat piles, constipation, fevers, rheumatism, Jaundice, Sciatica, dry cough, ring worm, intestinal problems and for all women related ailments. Flowers are effective in the treatment of lies and dandruff. Flowers are used in preventing the excessive secretion of Bile by liver. It is effective in toning the stomach, prevents gas formation and cures cough. A soup made out of the flowers taken early in the morning acts as an energiser. Dried flowers are used as components of a recipe in Assamese food.

Stem: The stem contains the glycoside naringenin -4’-0-β- glucapyranosyl-a-xylopyranoside and β-sitosterol. The stem is effective in the treatment of malaria and rheumatic joint pain. A decoction of the stem boiled in water along with ginger and long pepper, taken twice a day is used to treat malaria. 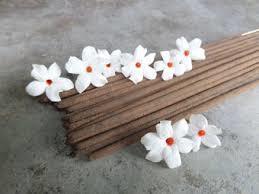 Leaves are used in Ayurvedic and homeopathic medicine for sciatica, arthritis, fevers and for several painful conditions. Leaves are used as laxative too. The leaves have anti arthritic properties. It is effective in the treatment of all types of inflammation and fever including malaria, intermittent fever, common cough and cold.

The juice of the leaves which tastes saline and bitter, mixed with sugar is used an antidote to treat various stomach ailments in children. The decoction of the leaves possess properties that protect the liver, anti-viral, anti-fungal, analgesic, antipyretic, anti-inflammatory antispasmodic, hypotensive and respiratory stimulant activities. Juice of the leaves mixed with honey is effective in the treatment of chronic fever and cough. The juice acts as an appetiser and provides a soothing effect in the stomach.

A decoction of the leaves boiled in water is effective in treating joint pains, swelling and Sciatica.

A paste of the leaves when applied on skin cures ring worm associated skin ailments. 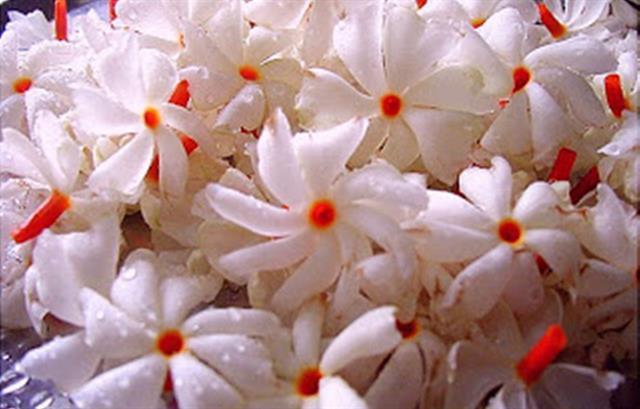 The seeds contain arbortristosides-A and B, glycerides of linoleic, oleic, lignoceric, stearic, palmitic, and myristic acids; nyctanthic acid; 3,4- secotriterpene acid, and a water soluble polysaccharide composed of D- glucose and D- mannose. Seeds have antibacterial, antifungal, immunomodulatory and anti- leishmanial properties. Seeds are effective in the treatment of constipation and skin ailments.

Other uses The leaves are used for polishing wood and ivory.

Parijata flowers signify the arrival of the Durga Puja.

In the ancient days, the robes of the monks were dyed using the orange of the Parijata flower. The flower which withers on the ground is collected and the orange stalk is separated from the white petals. These stalks are then dried and were used as a dye for the clothes.

Parijata flower is the only flower which can be offered to the Lord though it falls on the ground.

The scent of the flower is used in making incense sticks and attar.

In Assam, the flowers are used in cuisine, as they are rich in medicinal properties.

The wood of the Parijata tree is considered sacred and is offered in Homa/ Havan.