The Peepal tree is one of the sacred trees revered by Hindus, Jains and Buddhists. The tree is also called as the “Sacred Fig”. It belongs to the Moraceae, the fig or the mulberry family. Peepal tree is known by the other name as Bo- Tree. (Bodhi is derived from the Sanskrit word Bo- meaning wisdom, enlightenment).

Peepal tree is known as Ashwattha/ Plaksa in Sanskrit. The scientific name of the tree is Ficus religiosa.

Description of the tree:

Peepal is a very large tree. Its bark is light grey in colour, smooth and peels in patches. It is a dry deciduous, semi ever green tree which grows up to 30 meters in height. A gum like substance is also found on the trunk of the tree. The tree has a broad trunk measuring 3 mts in diameter.  The leaves are heart shaped (spear) and have long tapering tip measuring 10- 17 cms in length and 8-12 cms in width. The fruit is green when tender and turns purple when ripe.

The tree is native of India, Bangladesh, Pakistan, Sri Lanka, Indo China, South west China and Nepal. It is a species of the banyan tree.  The tree grows in all types of soil. It requires adequate sunlight and water for good growth. The tree is grown for ornamental purpose and for shade.

Peepal tree has a sweet and bitter taste.

According to Brahmanda Purana and Padma Purana, the demons fought with the Devas and defeated them. Vishnu to escape from the demons hid in the Peepal tree.

Skanda Purana also considers the Peepal tree as a symbol of Lord Vishnu. The Lord is said to be born under the tree.

During the Vedic period, its wood was used to make fire by friction.

Peepal tree is considered sacred as the Holy Trinity, Lord Brahma, Lord Vishnu and Lord Shiva reside in the tree. 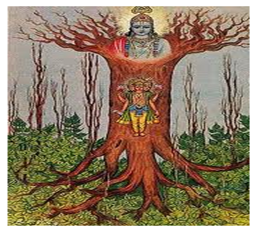 “The Supreme Personality of Godhead said: It is said that there is an imperishable Peepal tree that has its roots upward and its branches down and whose leaves are the Vedic hymns. One who knows this tree is the knower of the Vedas.”

“The branches of this tree extend downward and upward, nourished by the three modes of material nature. The twigs are the objects of the senses. This tree also has roots going down, and these are bound to the fruitive actions of human society.

“The real form of this tree cannot be perceived in this world. No one can understand where it ends, where it begins, or where its foundation is. But with determination one must cut down this strongly rooted tree with the weapon of detachment. Thereafter, one must seek that place from which, having gone, one never returns, and there surrender to that Supreme Personality of Godhead from whom everything began and from whom everything has extended since time immemorial.”

In Bhagavadh Gita, Lord Krishna says Of all trees I am the holy fig tree Ashwattha, and among sages and demigods I am Narada. Of the singers of the gods [Gandharvas] I am Citraratha, and among perfected beings I am the sage Kapila.

According to Skanda Purana, the river Saraswathi originated from the water pot and flows from Plaska on the Himalayas

According to Skanda Purana, the Peepal tree should be considered as one’s son, if he is not blessed with a son. The family name will continue as long as the tree lives.

Cutting down the tree is equivalent to Brahma hatya or killing a Brahmin.

According to Brahmanda Purana, there were two demons named Ashwattha and Peepala who used to harass people. Ashwattha would take the form of a Peepal tree and Peepala would disguise himself as a Brahmin. Peepala would advise people to touch the Peepal tree and when people went to touch the tree, Ashwattha, the demon would kill them. Later both the demons were killed by Shani. Thus it is common to see people touch the tree and worship the Peepal tree on Saturdays. Goddess Lakshmi, the consort of Lord Vishnu is also said to reside in the tree. Peepal tree is planted in Shani and Hanuman temples. 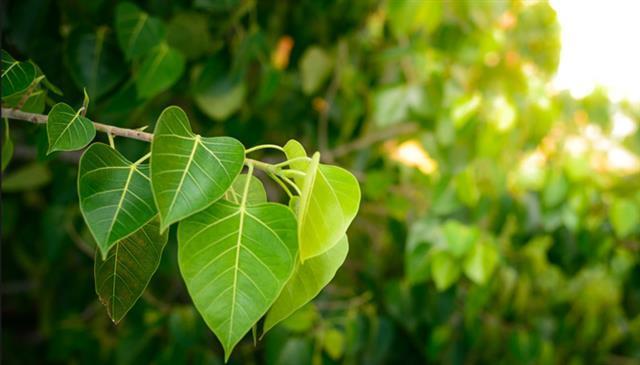 Peepal leaves, bark and roots are extensively used in several ayurvedic preparations. Peepal tree is of great medicinal value. They are known for their cooling and healing effect on the body.

Leaves: Peepal leaves are used in the treatment of the following disorders.

Peepal leaves have laxative property which is used to treat digestion related problems. For constipation, powder of dry leaves is mixed with jaggery solution and water and consumed. Leaves are very effective in treating mumps, dysentery and diarrhoea. Leaves heated in ghee are effective to treat wounds and skin disorders. Extract of tender leaves juice mixed with water and some refined sugar consumed twice daily for 4- 5 days gives relief for Jaundice. It helps to control the excessive amount of urine released during jaundice. Leaves are also effective in treating heart related ailments. Regular intake of the leaves helps in controlling palpitation of the heart and strengthen the heart functioning. Licking honey placed on peepal leaves is said to cure speech irregularities. Peepal leaves’ milk is used to treat eye pain. Extract of the juice from leaves is used to stop bleeding nose. Latex of the leaves and the leaves are a good moisturiser. It is very effective in nourishing the skin.

Barks: The bark of the tree contains wax, tannin and cochtone. Bark is used as an antibiotic against Staphylococcus aureus and Escherichia coli. The bark also has antibacterial, antiprotozoal, antiviral, astringent, antidiarrhoeal properties. Bark is useful in treating cuts, wounds and burns, ulcers, various skin diseases and scabies.

Water in which the freshly burnt ashes of the bark are steeped is an antidote for stopping vomiting sensation. 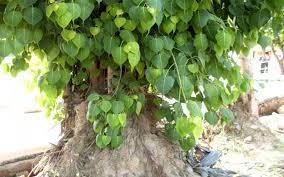 Fruits: Fruit is used to treat asthma, digestive problems, and against snake bite and other poisons. For treatment of asthma, equal quantity of fruit powder and bark powder is very effective. Fruits, when dried and powdered are highly effective in treating male and female infertility problems.

Seeds: Seeds are effective in treating urinary ailments. Seeds have a cooling effect on the body. They are laxative in nature.

Roots are used to heal ulcers and gum diseases. The leaf is used in making greeting cards.

The bark has tannin used in treating leather and in the fabric industry. (tannins are water soluble polyphenols that binds to and precipitates proteins and other organic compounds including amino acids and alkaloids)

If an elderly member in the family dies, special offerings are made to the tree during the mourning period of thirteen days.

Women worship the tree by binding red colour cotton cloth around the bark and circumabulate the tree. People circumambulate the tree either 7, 14 or 21 times, (in the multiples of seven).

The twigs of the Ashwattha tree are used in all Homa or Havan. In Bengal, women observe a ritual known as Ashwatthapats Vrata on the last day of the month of Vaishaka (April- May). The ritual requires the women to collect five Ashwattha leaves which signify the different stages in life. A new leaf signifies the birth of a son, a young green leaf for the beauty and youth, an old leaf for longevity of the husband, a dry leaf for increase in happiness and wealth, a withered leaf signifying contentment, happiness, beyond materialistic happiness.

The plant is a symbol of fertility and women worship the tree for begetting a progeny.

The tree is worshipped on a Saturday during Shravana, (July- August) as goddess Lakshmi is said to reside under the tree.

Worshipping Peepal tree is believed to ward off enemies and protect against contagious diseases.Watering the plant is said to earn merit for his progeny.In some of the households in Karnataka, Maharashtra, Madhya Pradesh, people decorate a twig of the Peepal tree, popularly called as the Kula Devtha and prayers are offered to the twig before the ceremonies such as Upanayanam and Marriage.

According to scientific research, it is Peepal tree alone which produces oxygen in abundance during day and night. In Awadh, if a girl’s horoscope predicts widowhood, she is first married to peepal tree on chaitra Krishna or Aswija Krishna Tritiya.

There is a Shloka which is as follows:

Saluations to the King of trees, whose roots are Lord Brahma, whose trunk is Lord Vishnu and whose crown is Lord Shiva”.

The following is the Shloka recited while praying to the Ashwattha Vruksha.