Generally most of the religions of the world propitiate God as ‘Heavenly Father’. Hinduism is one of the few religions of the world where God is also worshipped in its feminine entity as ‘Divine Mother’. Nature and Earth are referred to in their feminine forms as Prakriti and Mother Earth respectively. Even cows are worshipped as mothers as they offer life giving milk. The holy land of Bharat is referred to as Bharatmata or motherland recognising the reality that the land that we live in nurtures us as compassionately as a mother. In order to preach the eternal principles of Dharma and righteousness there have been numerous women saints, scholars, rulers and freedom fighters who have shone as a beacon of hope and courage under great odds to millions of women all over the world.

One such exemplary historical figure is Rani Chennamma of Kittur. She was one of the first women activists of Ancient India who fought against the might of the British Empire. Though she was arrested she paved the way for other valiant women to challenge the supremacy of the British and shake their military stronghold.

Rani Chennamma was born in the small village of Kakati in Belgaum in the state of Karnataka in the year 1778. Her father was said to be one Dhulappa Desai and finding her to be very intelligent he encouraged her in the knowledge of all fields. From a very young age she received training in sword fighting, archery and horse riding and got private lessons at home. She read Basava Purana and the epics of Ramayana and Mahabharata including various history books. She was also said to be a very good hunter. 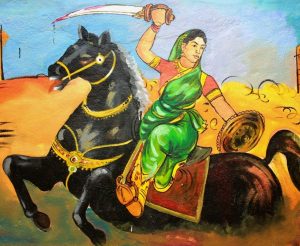 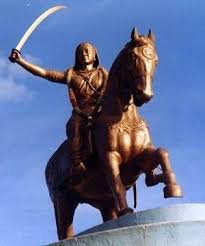 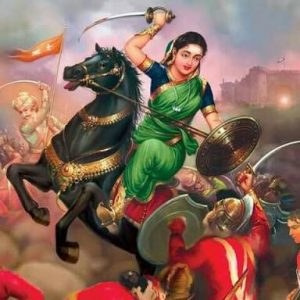 It is said that once King Mallasarja of Kittur was moving around trying to find support from neighbouring kingdoms to fight Tipu Sultan and approached Dhulappa Desai. He then saw Chennamma and was attracted to her confidence and bravery. Though he was already married and had a son Shivalinga Rudra Sarja, he took Chenamma as his second wife. They had a son who died at a young age. After King Mallasarja passed away his son became King but he is said to have died soon after adopting a son as he had no legal heir. Meanwhile the East India company’s collector and political agent Thackeray wished to capture Kittur to expand the British Empire. He was a clever strategist and refused to recognise the adoption as legal according to the Doctrine of Lapse imposed on all the states by the British. He sent his people to oversee the affairs of the kingdom and wished to take over the entire kingdom and its treasury.

Rani Chennamma pleaded her case by sending a letter to the British governor at Bombay but the request was turned down. She then decided to take charge and rallied together her trusted men to fight against the British. She had helped the King in the past in decision making while listening to grievances of the citizens during the King’s administration hence was capable of leading a battle for her people. Many of the men in her kingdom were bribed by Thackeray to create a division in the army. But she carried on undaunted and when Thackeray attacked Kittur she fought against the might of the British and a number of British officers including Thackeray were killed. The remaining officials and soldiers were imprisoned and she ensured that they were treated with courtesy and kindness.

The British Empire was enraged at the humiliation of defeat at the hands of a small ruler and sent bigger armies to Kittur to capture it. Rani Chennamma had anticipated this development and tried to strengthen her army by requesting neighbouring kingdoms for help. Unfortunately Thackeray had adopted the policy of ‘divide and rule’ and a majority of the people in Kittur were ready to surrender to the British. A fierce battle was fought but this time due to a number of traitors in her camp she lost the battle and was captured by the British and their treasury looted.

It is said that such was her indomitable courage and fearlessness that she tried to escape twice from the Kittur fort but was recaptured both times and then put in solitary confinement for life. She spent her days performing pooja and reading the holy texts till her death.

In the year 1829 she died in confinement with the dream of a free Kittur in her heart and mind. Her burial place or Samadhi is at Bailhongal taluka surrounded by a small park.

A statue of Rani Chennamma was inaugurated in Parliament building in New Delhi in the year 2007 by the then president and prime minister. A number of memorials have been set up naming schools, parks etc in her name. Every year her legacy is commemorated from October 22 to 24 during the Kittur Utsava. Her heroics are sung in folk ballads, gigipada and lavani.

The story of Rani Chennamma is the stuff of legends and stands out in the history of India’s freedom movement. According to Dr. Martin Luther King Jr, the great civil rights leader of America it is better to die for a great cause rather than to live without standing up for it.  Rani Chennama was a great example of this principle of real living by showing to the world that one woman could stand against the might of the British Empire for upholding justice and righteousness.