The history of India is replete with stories of bravery and courage of men and women who against all odds triumphed and carved a niche for themselves and were honoured and remembered for generations to come. Being a patriarchal society the difficulties and obstacles to be surmounted were greater for women than for men as women rarely enjoyed the level of freedom and benefits as the men and were generally treated as the weaker section to be protected and cherished.  Yet when circumstances demanded women took on the role of protector and benefactor and raised arms against the oppressors. One such leading women of the Indian freedom movement was Rani Lakshmibai of the princely state of Jhansi who was the epitome of courage and bravery and has been considered an example and lauded by Kings and historians.

Lakshmibai was born in the year 1828 (though some records state the year as 1835) into a Marathi Brahmin family in the holy town of Varanasi. Her parents were Moropant Tambe and Bhagirathibai. She was named Manikarnika at birth and was nicknamed Manu. She lost her mother at the tender age of four and it was her father who was responsible for bringing her up. Her father worked for the court of Baji Rao Peshwa of Bithoor district who was very fond of her and treated her like his own daughter. Her studies not only included formal education but also horse riding, archery and armament training. Most of her childhood was spent in the palace and her playmates included Tatya Tope and Nana Sahib.

Lakshmibai grew up to be a brave and intelligent girl. Meanwhile the Raja of Jhansi Gangadhar Rao was childless as his first wife had died without bearing any heir. He then married Lakshmibai and it was then that her name was changed from Manikarnika to Lakshmibai as was the custom in those days. She was an excellent horse rider and is said to have trained the women regiment who took up charge in the women’s quarters of the palace. Soon she bore a son but unfortunately he passed away after three months. When Gangadhar became sick and lay on his deathbed he was childless and this was a great tragedy in those days as according to the British Rule of Doctrine of Lapse a kingdom without an heir would become part of the British Empire. The King wanted to prevent this. Before he passed away, the King legally adopted five year old Damodar Rao who was a member of his extended family and declared Rani Lakshmibai as the Queen Regent. He did this in the presence of many high ranking British officials.

In the name of the East India Company the British who had initially come to trade in India began to steadily acquire political power. The Indian rulers were forced to establish ties with them in order to retain their kingdoms. The British began imposing humiliating conditions on the Kings who had no choice but to adhere to them to avoid annexure. Thus they became pawns in the hands of the British. Those who opposed them were vanquished and their kingdoms annexed. The kingdom of Jhansi too came under the British who stationed themselves in the state at the cost of the treasury. When King Gangadhar Rao was forced to adopt an heir the British refused to accept him as Lord Dalhousie had imposed the treaty of Doctrine of Lapse whereby adoption was not recognised and the kingdom would come under the British Empire. 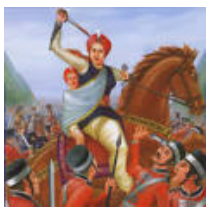 The British order enraged the people of Jhansi. Tatya Tope and many other officials began to secretly meet Rani Lakshmibai. They realised that she was the only person brave enough to take up the might of the British. Rani Lakshmibai carefully discussed the political strategy and studied the geography of the country. She would dress like a man on horseback with a metallic helmet, a flowing turban, a metallic plate protecting her chest, pyjamas and a sash over it. She carried pistols and daggers on both sides and a sabre. The British restricted her movement around the country as they feared a revolt. In order to discuss the political strategy she devised a way to meet all her well wishers and activists by organising a religious celebration. She requested for money from the royal treasury to perform the sacred thread ceremony for the adopted heir Damodar Rao. There was discontent in the army as the Hindus were not allowed to wear the sacred mark ‘Tilak’ on their forehead while the Muslims were compelled to use cartridge smeared with fat. The Rani felt that they should not be in haste but should first gather arms and ammunition and make adequate preparations. But slowly the discontent mounted and burst forth in the Sepoy Mutiny. This was the beginning of the freedom struggle in India. Inspite of being defeated the struggle was considered a roaring success as for the first time not only the army but people from all sections of society joined in the struggle. Until then the main reason for the success of the British was the disunity among the Indians. The coming together of the Indians for the common cause of overthrowing the British was the key success of this revolt.

Rani Lakshmibai found strength in prayer, worship and religious discourses while at the same time practising the art of warfare and getting the people ready for battle. She always claimed that she was a Kshatriya woman and was born to protect her people or die in battle. When the Kanpur revolt broke out, the British came rushing to her for succour as the soldiers were attacking British women and children. Rani Lakshmibai felt that the war was only among the soldiers in battle and gave shelter to them in her palace. She also had to curb rebellion within her own kingdom as some jealous rebels felt that being a woman they could easily thwart her but they were vanquished by her. Meanwhile she administered the kingdom wisely and the treasury became full with a well organised army of men and a separate army of women. Under her guidance every house in Jhansi was slowly preparing for war.

The declaration of war In 1858 the British declared war on the kingdom of Jhansi. The Rani fought bravely and her bravery and courage surprised the British. A number of her soldiers in her armies laid down their lives. She realised that they were outnumbered and decided to retreat back and strengthen her forces again. The Rani along with some of her trusted lieutenants fled to Gwalior fort and began reassembling the troops. Soon the British attacked again and though the Rani fought bravely she was mortally wounded. Some legends also portray her fighting with her son tied to her back.

She died on the battlefield in the year 1858 and she chanted her Bhagavad Gita regularly with the inner conviction that the battle against the British was her ‘Dharmayuddh’. Her Samadhi has been installed in the Phool Bagh complex of Gwalior which is an eight feet tall metal statue. Every year in the month of June a fair is organised in her memory and honour.

A stamp has been issued in her name and a number of parks and roads around the country have been named after her.

Rani Lakshmibai’s life was a saga of sacrifice and courage. Inspite of becoming a widow at just eighteen years of age and living for only a short period she was the embodiment of heroism, patriotism and self respect. Through her actions though she was a queen of a small state she died an Empress with limitless glory of fortitude and courage. She had a lion’s spirit and her foresight and maturity were far beyond her age. Even the British were forced to acknowledge her courage and heroism. She has been compared to Jean of Arc and was a beacon of light and hope to the people in their fight against the might of the British Empire.