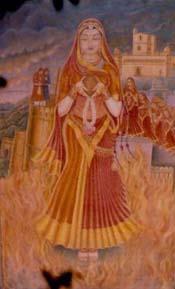 Among the great women of India, the name of Rani Padmini of Chittorgarh occupies a place of prime importance as an icon of national honour. Her tale of courage and sacrifice emphasises the importance placed on the honour of Indian women and the sanctity of marriage. In order to avoid capture and dishonour at the hands of Muslim invaders, the women of the royal Rajput clans would perform Jauhar or self-immolation. The Rajputs were a fiercely proud and independent clan, with ideals steeped in tradition and lineage. The Rajput soldiers would fight until the last man, and their patriotism was legendary.  When the fall of a besieged city was certain, in order to give the invaders a hollow and inglorious victory, the women would perform Jauhar. The men would then ride out for annihilation by the enemy, and this fight unto death by the men was called Saka.

Rani Padmini or Padmavati, as she was named at birth, was the daughter of King Gandharvasen and Queen Champavati of Singhal. Not much has been mentioned about her childhood and early life, except for the fact that she grew up into a very beautiful woman.

When Padmini reached marriageable age, her father arranged a Swayamvar and invited all the Kings in order to be able to select the most eligible one worthy of her grace and beauty to marry her. Among them was Malkhan Singh, a King from a neighbouring state. However, King Rawal Ratan Singh of Chittor, who though already married, defeated him and others, and won the hand of Padmini.

Jalaluddin Khilji was the first Emperor of the Khilji dynasty, and the Sultan of Delhi. In 1296, his son in law and nephew Allaudin Khilji, killed his uncle and marched on to Delhi to proclaim himself King. He defeated the plundering Mongol armies and dreamt of becoming a world conqueror. He then began the process of consolidating the Delhi Sultanate, and later became one of the most powerful rulers in the subcontinent. One of the most bitter opponents of Allaudin Khilji, was the Rajput kingdom of Mewar. The Chittor fort was the seat of Mewar, which had been constructed by the Mauryan Empire in the 7th century AD. It was situated on a hill top and was spread across seven hundred acres with good fortifications. In those days Chittor was ruled by the Rajput King Rawal Ratan Singh. He was a brave and noble ruler. He was a patron of the arts and a kind and just husband. There were many talented musicians in his court, one of whom was Raghav Chetan. He was also a sorcerer and was involved in evil spirits to run down his rivals. On hearing of this, the furious King punished Raghav by blackening his face and making him ride a donkey. He was then banished from the Kingdom. Raghav was enraged at this humiliation and swore to take revenge on the King. As he was a talented musician, he gained entry into the court of Allaudin Khilji and slowly incited him to attack Chittor after regaling him with tales of the beauty of Rani Padmini. 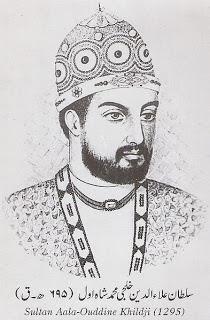 Keen on having a glimpse of her and with the desire to include her in his harem, Allaudin Khilji set out with his army to Chittor but was dismayed to find it heavily guarded. He then sent a request to King Rawal Ratan Singh that he considered Padmini as his sister and having heard tales of her beauty wished to have a glimpse of her.

The King, in order to avoid a battle, agreed to allow Allaudin to see Rani Padmini’s reflection in the mirror. Allaudin then entered the Kingdom with a few of his trusted warriors and saw her reflection in the mirror. On their way to the palace they made a careful examination of the fort’s defences. Allaudin was stunned by her sparkling grace and beauty. When Ratan Singh accompanied Allaudin out of the fort as a good host, Allaudin’s men pounced on him and held him prisoner.

Allaudin then sent a letter to Rani Padmini and the royals of Mewar demanding Padmini in exchange for Ratan Singh. Rani Padmini then discussed a strategy with the leading generals of Ratan Singh’s army who were also her uncle and cousin Gora and Badal and together they came up with an ingenuous and daring plan. A message was sent to Allaudin that Rani Padmini would come to his camp in the morning along with her retinue and maids. The next morning 200 palanquins with each palanquin being carried by four palanquin bearers left the gates of Chittor. These bearers were soldiers of the Rajput army in disguise. Inside each palanquin were four men carrying weapons. When they reached Allaudin’s campsite, they jumped out and attacked the unsuspecting soldiers. King Ratan Singh was rescued, but their army suffered heavy losses along with the death of the two generals. 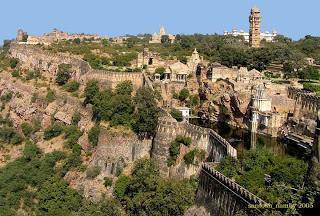 The enraged Allaudin then laid siege to the fort. The long drawn siege could not be sustained any longer as the resources within the fort decreased and finally Ratan Singh had to decide on Saka and Jauhar (all out suicide attack and self immolation) rather than risking dishonour at the hands of the invaders. On August 26th 1303, a huge pier was lit within the fort and the noble women of the court committed Jauhar. Next morning, the men then performed Saka by going out to battle against Allaudin’s army till all of them perished in the battle. It is said that when the victorious Allaudin’s troops marched into the fort they were shocked to be confronted with only the ashes and bones of the women. A halo of glory is given to their supreme sacrifice and bards and songs glorify their act until this day. Though this system is considered inhuman these days, it must be understood in the light of the circumstances of those days.

The book Padmavat a poetic work of considerable literary merit has been written in Hindi in the Awadhi dialect by Malik Mohammed Jayasi of Amethi in U.P in the year 1540 AD on the legend of Rani Padmini. Amir Khusro, the eminent chronicler of those times, was a great storehouse of knowledge, who gave legitimacy through his writings on Rani Padmini and contemporary events that took place then. Khuman Raysa the great chronicler of the Rajputs recompiled during the reign of Maharana Pratap from 1572-1597 also mentions the story of Rani Padmini.

The history of Chittor is fascinating in the pages of Indian history as it contains innumerable legends of the heroism and bravery of the Rajputs and was one of the most fiercely contested kingdoms of power in ancient times. Its impregnable forts, palaces, towers, Kings and Queens were the stuff of folklore. Among them are the famous stories of Meerabai, Maharana Pratap, Rana Sangha, Rana Kumbha, Panna Bhai and Rani Padmini. The story of Rani Padmini is a fascinating tale of matchless beauty, courage, sacrifice, valour, honour and tragedy.