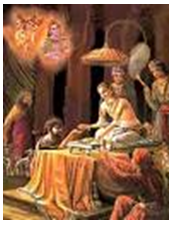 The philosophy of Hinduism is based on the principle that a hand giving away charity (Dana) is far superior to a hand adorned with bracelets. The scriptures extol the deeds of many great Kings and personages who considered Charity as their life breath. One such illustrious King was King Rantideva who has been mentioned in the Srimad Bhagvat Puran. He was a great devotee of Lord Vishnu and was well known in the three worlds for his great quality of charity and detachment.

One day in Vaikunta Lord Vishnu was in a relaxed posture when Lord Brahma, Lord Indra and the other Devas came to meet him. During a discussion Indra asked Vishnu as to who his favourite devotee was. Vishnu immediately replied that it was King Rantideva. Indra was surprised that Vishnu had selected a human being from all the three worlds. Later on he discussed it with Vayu, Varuna and the other Devas as he was puzzled as to how a human being could achieve the exalted status when there were countless Devas and Gandharvas who he felt to be far superior than human beings. So they all unanimously decided to test Rantideva. 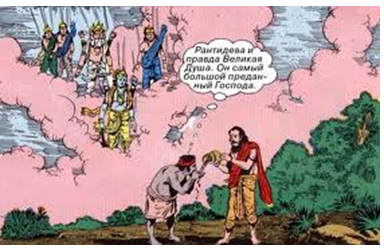 Rantideva was a descendant of Bharadvaja and was a good King who ruled his kingdom wisely. His subjects were very happy as the Kingdom was prosperous with abundant crops and everything was in plentiful. He was a great devotee of Lord Vishnu and his pious and humble disposition endeared him to all. But soon all of a sudden things changed. There were unseasonal winds and rain and all the crops were destroyed. This led to famine and Rantideva opened up all his granaries and began donating everything to the people. However the situation kept worsening and the crops kept failing every year. He opened up his treasuries and donated everything to the people but it soon began proving insufficient. The situation worsened and the entire kingdom became dry and arid and the people began to suffer. Rantideva himself lived frugally but was unable to improve the circumstances. Unable to bear the misery of his subjects he realised that only Lord Vishnu could protect his kingdom and his people. He gave up everything and began to fast, deeply meditating on the Lord all the time. On the forty eighth day the ministers unable to bear the sight of their thin and shrivelled king begged him to break his fast. Rantideva agreed with great reluctance and as he began to eat a man came tottering towards him, weak with hunger. To the dismay of his ministers and loved ones he handed over a portion of food to the hungry man. Soon thereafter as he began eating, another starving man appeared and the king handed over another portion of his food leaving behind a small portion for himself. Finally as Rantideva began to eat another man appeared with his dogs who were all hungry. The King fed them the remaining portion. Now the King decided only to drink water and break his fast. But soon a thirsty Chandala (man of low caste) who was Lord Yama in disguise appeared and the King offered him the water. The stunned Chandala refused as he was an untouchable but the King reassured him that as it was the same Lord Vishnu who had created both of them they were equal and hearing this the Chandala happily appeased his thirst. Suddenly there was a flash of light and Lord Vishnu appeared before him along with all the other Devas. The Lord told Rantideva that the Devas had been testing him and he had proved that he was eligible to be the Lord’s greatest devotee. He was granted the boon of Moksha or salvation and in great happiness he merged unto the Lotus feet of the Lord.

Rantideva was an exemplary character in Hindu mythology who was a ‘Stitha Pragnya’ unaffected by the vicissitudes of life with the mind always fixed on the goal. His exemplary quality of detachment and one pointedness in Hindu folk lore is an inspiring story of goodness, purity and humility. He had risen above the bonds of maya and perceived the Lord in all creation.