Sage Agasthya and the Demons 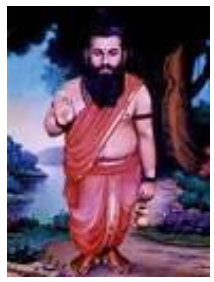 One of the most famous stories enjoyed in Hindu mythology related to food is the amusing story of the demons Ilvala and Vatapi and their destruction at the hands of Sage Agasthya.  Agasthya was one of the Saptarishis and is extolled in the scriptures as one of the greatest saints of Ancient India. It is said that due to Indra’s curse the Gods Agni and Vayu were born on earth as Sage Agasthya and Sage Vasishta respectively.  Agasthya was a great sage and had extraordinary spiritual power. The demon Hiranyakasipu and his wife Gayathu had four sons Samhlada, Anuhlada, Hlada and Prahlada. They also had a daughter named Simhika. Their son Hlada was married to Dhamani. They had two sons named Ilvala and Vatapi. 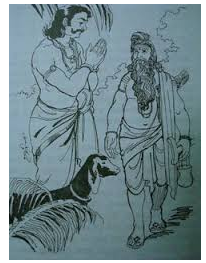 Ilvala and Vatapi lived in the city of Manimathi. The name Ilvala means  ‘of restless mind and absence of good qualities’ while Vatapi means ‘death or one who drinks off all life’. Once, Ilvala wished to have a son who was as powerful as Lord Indra, the King of Devas. So he invited a Brahmin for food and served him with reverence and devotion. At the end of the meal he asked the sage to grant him the boon. But the sage was shocked and refused to oblige. This made both Ilvala and Vatapi bear a grudge against all Brahmins and hate them. Both the Asuras had magical powers. Ilvala knew the ‘Mritasanjivani mantra which could restore the dead back to life while Vatapi had the power to change himself into any life form. They used these powers to loot and kill people. They would invite a Brahmana for food. Vatapi would turn himself into a goat which would be cooked and offered to the Brahmana. After the meal Ilvala would call out to his brother by shouting ‘Vatapi Athragacha’ meaning ‘Vatapi come out’ who would tear the stomach of the guest and rend his way back to life.

Once, Sage Agasthya was invited with great honour and reverence by the brothers. The great sage knew the intention of his hosts and wished to put an end to this. Agasthya ate the meal offered to him with great relish. When Ilvala shouted ‘Vatapi Atragacha’, Agasthya put his right hand on his stomach and said ‘Vatapi Jeernobhava’ meaning ‘Vatapi get digested’. Vatapi was trapped inside and could not come out. That was the end of him. Now Ilvala was really frightened and began shouting loudly in anxiety. Agasthya smiled and informed him that Vatapi had been digested and could never come out. Enraged at Agasthya, Ilvala attacked him but the great sage with the power of his penance (tapas) reduced him to ashes. Thus the world was rid of the two evil demons.

This story has a deep inner spiritual meaning. Travellers when crossing through the jungle of life have a restless mind (Ilvala) and indulge freely in the spirit of death (Vatapi). But, if guided by wisdom (Agasthya) the traveller can warn ‘Ilvala’ to behave and digest away ‘Vatapi’.

Moral stories with rich human values have formed the bedrock of Indian scriptures and they are passed on from generation to generation encouraging humanity to lead a life of truth and humility irrespective of class, creed or status thus raising the spiritual fibre of the nation as a whole.