In: Festivals Of The Month, Hindu Lifestyle, Puranic, Women Legends
With: 0 Comments

The legend of Savitri has been mentioned in the Adi Parva of the Mahabharata and was narrated by the great sage Markandeya to the Pandavas. When the Pandavas were sent to the forest in exile by the Kauravas, Jayadratha the King of the Sindhu kingdom, who was married to Dushala, the only sister of the Kauravas, was passing through the forest when he came upon Draupadi in her hermitage. The Pandavas had gone out to gather food and had left Draupadi in the care of their priest Dhaumya. Struck by her beauty and grace, Jayadratha approached her and requested her to come away with him. Draupadi was shocked and warned him about her five husbands and their power and strength, but Jayadratha refused to listen. He pushed away the priest and overpowering her, carried her away in his chariot. When the Pandavas returned and heard of her fate, they rushed after Jayadratha, challenged and defeated him and freed Draupadi. When Bhima was about to kill him, Draupadi (some legends state Yudhisthira) intervened as she did not want to hurt Dushala by making her a widow and requested him to be pardoned. Bhima then shaved off Jayadratha’s head in five places and forced him to beg pardon in public. Consequently, when Yudhisthira posed the question to Sage Markandeya if there was any other chaste and pure woman like Draupadi, the great sage then related the story of Savitri. Savitri is considered as one of the Panchakanyas in Indian scriptures who are prayed to and revered by women as an embodiment of purity and chastity.

King Aswapati and Queen Malavi were the royal couple of the kingdom of Madra. They had no children and in order to ensure the continuance of his lineage, the King propitiated the Sun God Savitr. Pleased with his prayers, God Savitr appeared before him and granted him the boon of a child. Consequently, the Queen gave birth to a girl whom they named Savitri after the Sun God. Just like the sun, she was born with exceptional qualities and her beauty and purity shone through her in all its glory.

Search for a suitor

It is said that such was her effulgence that when she reached marriageable age, most of the Kings were daunted and unable to bear her blazing splendour, did not approach the King to seek her hand. Her father then asked her to choose a husband of her choice. She agreed and set out on a pilgrimage to choose a suitable husband. After travelling far and wide, she came across Satyavan, who was the son of the blind King Dyumatsena, the King of the Salwas. His scheming kinsmen usurped his kingdom, hence the King was in exile and due to his disability, it was Satyavan, who as a woodcutter was helping the family to eke out an existence in the forest. 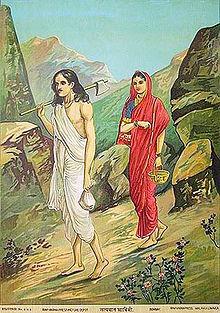 Savitri decided to marry Satyavan and returned to the kingdom to inform her father. Sage Narada too had arrived at the kingdom at the same time and he dissuaded Savitri from her choice as he had foreseen that her husband was destined to die after a year. Her father too pleaded with her to choose a more suitable husband. However, Savitri was determined to marry only Satyavan. Finally, Sage Narada agreed and blessed her and her father too decided to accept his daughter’s wishes. Savitri and Satyavan were married and Savitri proceeded to the forest along with her husband. She lived a pious life serving her husband and inlaws dutifully.

Time passed and the date of death drew near. Three days before the impending date, Savitri took a severe vow of holy fasts and penances and kept hard vigils during the nights. As the doomsday of her life dawned, with fervent prayers and her heart laden with sorrow, she could not bear him out of her sight even for a short while and decided to accompany him to the forest where he usually went everyday to gather fuel and food. She begged Satyavan and his parents to grant her permission to accompany him. They consented and she then set out to the forest along with Satyavan. 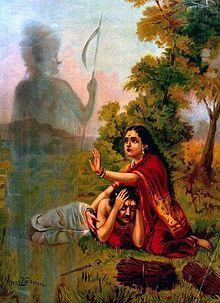 In the forest, while cutting wood Satyavan felt dizzy and Savitri immediately fearful and trembling, asked him to rest his head on her lap. Satyavan then placed his head on her lap and passed away. Clasping him to her Savitri sat there in the lonesome forest. Soon the emissaries of the Lord of death arrived to take away the soul of Satyavan. But they found that as long as Savitri sat there with her husband, the zone of blazing splendour surrounding her prevented them from accomplishing their task. They fled back to Lord Yama, the God of death who proceeded to the spot himself.

Lord Yama then approached Savitri and requested her to move away explaining that death was the fate of man and no one could escape it. Yama then drew the soul out and proceeded on his way. Savitri then began to follow Yama. Yama turned back and requested her to desist following him as death was final and she had to accept it. Savitri replied that she was not following him but was following her husband as the love between a loving husband and his faithful wife was eternal and nothing could separate them. When he tried to convince her to turn back, she spoke words of wisdom and hearing her various instances and explanations from the holy scriptures, Yama was pleased and granted her a boon other than sparing the life of her husband.

Savitri wished that her father in law’s eyesight be restored and that he should regain his kingdom. Yama granted her the wish. Then she continued to follow him and Yama asked her if she would follow her husband even if he were to go to hell. Unfazed, Savitri replied that whether hell or heaven she would gladly follow her husband as that was her true Dharma. Yama was pleased with her sincerity and devotion and granted her another boon. She requested sons for her father Ashwapati to carry further his lineage. Yama granted her this boon too, still Savitri continued to follow him. When he asked her to return, she replied that her mind, body and soul were attached to that of her husband and since Yama had got possession of it, she had no choice but to follow him. Yama was pleased with her and granted her another boon. Savitri stated that she be granted sons to continue her lineage. Yama blessed her and then realised that this meant her husband Satyavan needed to be alive. Pleased by her, Yama then granted her desire and her husband came alive once again. Yama praised her that her powerful love had conquered even death and made him powerless against it. He blessed her to lead a happy and virtuous life with her husband.

Satyavan awakened as if after a deep sleep and both of them returned to his parents where Satyavan’s father, the King, had regained his eyesight. Soon a messenger announced the death of the usurper and thus the King regained his kingdom. As she narrated the story to them they all praised her and joyfully returned to the kingdom to live happily ever after.

The story of Savitri has been captured on canvas, in books, in plays and movies in various languages. Her story has been encapsulated in Shri Aurobindo’s epic poem Savitri and many operas around the world have been based on her story.

This festival is celebrated on the full moon day in the Hindu month of Jyeshta (May – June) in the states of Maharashtra, Karnataka and Gujarat. It is celebrated in honour of Savitri by women who keep a fast for the well being and prosperity of their husbands the whole night and end their fast the next morning by giving food and clothes in charity to holy men in a bamboo basket. The women wear bridal clothes and ornate jewellery and recite prayers and worship a banyan (Vat) tree forming groups they listen to the story of Savitri. They offer holy water to the tree, sprinkle kumkum and tie cotton threads around the trunk of the tree. They perform pratikrama by going seven times around the tree.

Women in Tamil Nadu observe the ‘karadayan nonbu’ during the transition of the Tamil Months Maasi and Panguni in honor of Savitri.

Since time immemorial in the sacred land of Bharat, women have been given great importance as they bring auspiciousness and prosperity on the family, society and thus the nation at large. The story of Savitri who by the power of her character could bring her husband back to life after overcoming many obstacles is inspiring. Such chaste women (Pativrata Stree) have only sacred feelings as their Dharma and their pure heart as their witness. Adhering to truth and righteousness they follow the dictates of their conscience. The scriptures declare that women are, in essence, stronger than men as they are endowed with five powers namely sacrifice, contentment, respect, dignity and prosperity. Great sages and saints state that the land of Bharat owes its glory and greatness to the power and presence of such virtuous women.