One of the most beautiful stories in Hindu mythology is the devotion of a poor tribal woman Shabari to Lord Rama. Fruits offered to the Lord tasted by her and accepted by the Lord forms the essence of Bhakti yoga and has been enjoyed and passed on from generation to generation emphasising on the fact that only devotion is the royal path to reach the Lord irrespective of caste, creed or gender.

Lord Rama’s consort Sita was carried away by the wicked King of Lanka Ravana and Rama and his brother Lakshmana were moving about in search of her. On the way they reached an ashram where the great Tapasvini Shabari was waiting for them.

Shabari belonged to a low class tribal community and was the daughter of a hunter. It is said that right from a young age she was moved by compassion and on the night before her marriage she saw her father bringing many sheep and goats to be sacrificed for her wedding feast. Filled with sorrow she ran away from home and decided to search for a spiritual personage who would guide her. She travelled for days till she reached the foot of the sacred Rishyamukha Mountain where she met Sage Matanga. She accepted him as her Guru and served him faithfully with devotion. When her Guru Matanga was about to take up Mahasamadhi he blessed Shabari now an old woman that due to her Seva Bhava the Lord himself would arrive at the ashram and redeem her.

Shabari was thrilled as she could not believe that an old tribal woman like her was worthy of the Lord’s grace. But she believed in the power of her Guru’s grace and from that day her whole focus was on the impending arrival of the Lord. With the help of a stick she would walk around the ashram searching for the juiciest fruits. Tasting each and every one she would collect only the sweetest ones in her basket. She would clean the ashram, clearing it from thorns and stones and would eagerly pray for the Lord’s arrival. 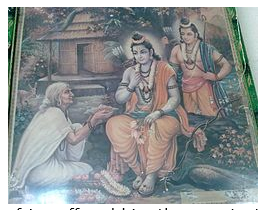 Finally the great day dawned and it is said that among thousands of yogis waiting to receive the Lord in their ashram it was only Shabari whom Lord Rama decided to bless. Her eyesight was dull and her hands quivered. Seeing the charming figures of the brothers her heart was filled with gratitude. She washed Lord Rama’s feet and with tears of joy offered him the sweetest fruits. Lakshmana was stunned to see the Lord accepting those which had been tasted first but the Lord informed him that it was the fruit of the highest devotion grown on the holy tree of life on the branches of the pure mind blossoming in the sunshine of divine love hence it was the tastiest to him.

Shabari then told Rama that she was untutored and from the lowest class and had practised no austerities so she did not know how to extol his virtues and grace.

Lord Rama then delivered to Shabari his discourse on the Nine fold path of devotion or the Nava Vidha Bhakti and said that he paid no attention to prestige, scholarship, intelligence, spiritual powers or status.

Shabari then informed him about Sugreeva and his alliance with Lord Rama which was mentioned by her Guru and urged Lord Rama to meet him and find Mother Sita.

Shabari then fell at Lord Rama’s feet and with the grace of the Lord and the power of her austerities her body was merged with that of the Lord and she attained salvation.

The stories in Indian mythology stress on the importance of human values and right living encouraging man to live a life of morality and truth. These stories are easy to understand and help mankind in their quest for self realisation and bliss.