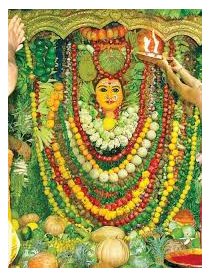 Shakambhari Devi or Shakumbhri Devi is considered to be the Goddess of vegetarianism, ‘Shaka’ meaning vegetables and ‘Ambhari’ meaning one who bears. She is considered to be a manifestation of Goddess Durga as she killed the demon Durgam. She is said to be the Bearer of Greens. She is also referred to as Goddess Ishwari, the consort of Ishwar the God of the Universe. She is Aadi Parashakti and as Maya is the Prakriti half or the Creative half (nature) while the other part is Purusha or the soul. She is also called Shatakshi meaning ‘one with the countless eyes’.

Reference in the Scriptures

Goddess Shakhambhari is referred to in the Skandha Puran and as Goddess Shatakshi in the Shrimad Devi Bhagavatham and the Devi Mahatmyam and as Durga in Durga Saptshati. She is said to remove grief and bequeath prosperity.

The Goddess is said to wear a crown symbolising the Mahavidyas. The third eye on her forehead represents the eye of knowledge or Jnana. She wears a red sari and in her upper hand holds a lotus symbolising purity and non attachment. The bees around the lotus symbolise the sucking of the nectar of wisdom. The left upper hand holds a bow and arrow in order to protect her devotees. Her lower hands carry herbs, flowers, roots and vegetables depicting her as the Goddess of Vegetation. Those who worship her will always secure the fruits of prosperity and bliss.

Legends state that the demon Durgam who was the son of Ruru through severe penance to Lord Brahma secured all the four Vedas and a boon that he would henceforth be the recipient of the fruits of all worship and yajnas done to the Devas thus becoming invincible. He then became arrogant and began tormenting the three worlds. Meanwhile the Vedas were forgotten by the Devas and they did not conduct any homas or Yajnas due to which there was no rain for a hundred years. This resulted in drought everywhere and the great sages began to meditate on the Divine Mother Shakti. Moved by their plight the Divine Mother is said to have cried tears of compassion for nine days and nine nights releasing copious flow of waters. She bore cereals, grains, greens, fruits and vegetables and for the sick she brought herbs and medicines. The Rishis were overjoyed and then requested her to retrieve the Vedas. There was a great battle between Goddess Shakambhari and the demon Durgam and with her trident she finally killed him. It is said that all the benefits accrued in the pujas and yajnas performed by the Devas which were usurped by the demon earlier turned into a bright light force and was absorbed by the Goddess. Finally the Vedas were handed back to the Devas and peace and prosperity reigned once again.

It is situated in the Jasmour village of Saharanpur in UP and is one of the 51 Shakti Peethas where parts of the Goddess Sati fell. It was said to be constructed by the Pundir Rajputs of Jasmour and the temple is visited by devotees from all over the world especially on Navratri days. The idol of the temple was said to have been consecrated by Shankaracharya after meditating here.

The other temples of Mata Shakambhari are in Sikhar district in Rajasthan, near the Sambhar lake in Rajasthan and in the Kedar hills in Uttarakhand. The last one mentioned is the oldest temple and is said to be the original place where the Goddess appeared as Shakambhari to annihilate the demon Durgam. This temple is amidst beautiful Himalayan peaks, dense forests and snow. The Goddess is also referred to as Banashankari where ‘’Bana’ means forest and a number of temples are dedicated to this Goddess in Karnataka.

Shakumbhari melas are organised twice a year during Navratri and Holi and the temple is famous and is visited by devotees regularly.

The stories related to food in Hindu mythology always revere the Mother aspect of God who feeds and takes care of her children with her boundless love and compassion for them. Such stories inculcate a feeling of humility and reverence towards food as being a gift of God and help mankind to empathise with all humanity while preaching principles of sharing and non wastage of resources bringing about the Unity of man and brotherhood of God.