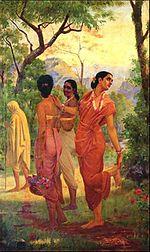 The story of Shakuntala is expounded in depth in the epic Mahabharata and also finds mention in a number of Puranas like Padma, Matsya and Bhagavatha. In the Jataka tales of Buddhism, the story Kattahari Jataka is very similar to that of the story of Shakuntala.  The great Sanskrit dramatist and poet Mahakavi Kalidasa has immortalised the story of Shakuntala in his literary masterpiece ‘Abhijnanashakuntalam’ which is considered to be one of his best works dramatised in the form of a play. The play was the first Indian drama to be translated into English and there are at least 46 translations in more than twelve European languages to date. While Kalidasa’s Shakuntala was depicted as an ‘Abala Nari’ (weak woman) or a damsel in distress, Vyasa’s Mahabharata depicted her as a woman of knowledge and courage. 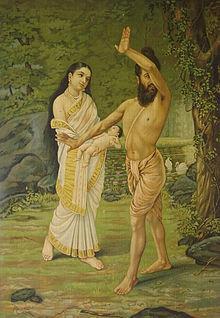 Sage Vishwamitra was one of the most revered and venerable sages in ancient times. He was earlier a King named Kaushika who, after confronting Sage Vasishta, realised that wealth and power were no match for the power obtained after performing spiritual penances. He then went to the forest and began severe austerities. Fearing his spiritual power, Lord Indra decided to send an apsara Menaka to distract him. Her beauty and grace succeeded in distracting him and consequently she bore a daughter by him. Vishwamitra was furious and angered by his lapse which had resulted in losing the merits he had gained through years of penance. He then distanced himself from Menaka and his child to return to his spiritual pursuits. Menaka then left the child in the forest and returned to the heavenly realms.

Sage Kanva was passing by and he saw the sweet and charming baby surrounded by groups of Shakunta birds. He then named the child Shakuntala. He took the abandoned child to his ashram in the Shivalik hill ranges of the Himalayas on the banks of the Malini River. Time passed by and Shakuntala grew up to be a beautiful, virtuous and graceful woman. 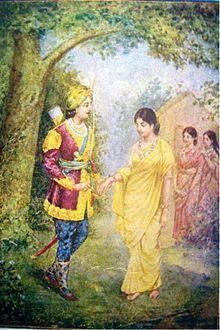 One day, King Dushyanta, the King of Hastinapur, was hunting in the forest and while pursuing a deer, he reached the ashram of Sage Kanva. There he saw Shakuntala and was entranced by her beauty and grace. Shakuntala too was deeply attracted to him. They decided to get married as per the Gandharva tradition by exchanging garlands and Dushyanta gave her his Signet ring. Dushyanta soon left for his kingdom promising Shakuntala he would return and take her back to the kingdom with him.

Shakuntala spent her days lost in thoughts of Dushyanta and lived in a dream like state. Days passed and one day Sage Durvasa arrived at the ashram. Shakuntala was lost in her thoughts and failed to greet him with the respect due to his personage. Sage Durvasa was incensed by this slight and cursed her that the person she was thinking of would forget about her altogether. When her friends heard the curse, they rushed to the sage and explained to him the reason for Shakuntala’s distracted state. They pleaded with him to pardon her innocent misdemeanour.  The sage then calmed down and modified his curse stating that the person who would forget her would gain back his memory, if shown some personal token given to her in the past.

As time passed Shakuntala was unhappy as King Dushyanta had not come to take her and she set out with Sage Kanva to his kingdom. On the way as they crossed a river by ferry, Shakuntala ran her fingers in the cool waters and unknowingly her ring slipped off from her finger.

When Shakuntala arrived at the kingdom, due to Sage Durvasa’s curse, King Dushyanta could not recognise her nor recollect their time of association. Humiliated and sad, Shakuntala decided to live in the forest. By this time she was enceinte and gave birth to a male child who was named Bharata. Living in the forest and surrounded by birds and animals, Bharata grew into a strong and valiant youth. He feared none and it is said that he made a sport of counting the teeth of wild animals by opening their mouths wide.

Meanwhile, a fisherman found the ring when he examined and cut open his catch of fish. Recognising the royal seal, he then took the ring to the King, who on seeing it immediately remembered his beautiful bride Shakuntala. He then rushed to the hermitage of Sage Kanva but found that she no longer lived there. He then went deeper into the forest in search of her and to his amazement came upon a young boy who was boldly playing with wild animals and counting their teeth. When asked about his parentage, the boy stated that he was Bharata, the son of King Dushyanta. He then took the King to his mother Shakuntala. Dushyata and Shakuntala were overjoyed to see each other and the family was thus reunited.

Another legend states that when King Dushyanta failed to recognise Shakuntala, her mother Menaka took Shakuntala to heaven, where she soon gave birth to her son Bharata. In order to be reunited with his wife and son, Dushyanta was required to fight with the devas and win against them. He emerged victorious in the battle and saw a kavach tied to the hand of his son fallen down. The devas informed him that only the boy’s father or mother could tie it back. When Dushyanta successfully tied it back he was recognised as the boy’s father. The boy then took Dushyanta to his mother Shakuntala and the family was reunited in heaven. They then returned to earth, where Dushyanta then ruled wisely for many years and later handed over the kingdom to Bharata.

Bharata was a descendent of the Lunar dynasty and an ancestor of the Pandavas and Kauravas. His name means ‘the cherished’ in Sanskrit. Earlier he was named Sarvadamana meaning ‘the subduer of all’ as even as a young boy he could subdue all wild animals. He was said to be the founder of the Bharata dynasty and India has derived her name ‘Bharat’ from him.

Many famous poets like Germany’s greatest poet Goethe and great French, Hungarian, Austrian, Norwegian and Italian composers among others have composed ballets and operas influenced by Kalidasa’s play. Sculptures of Shakuntala were also created by many master sculptors throughout the world.

Theatre productions and movies have been made immortalising Shakuntala in celluloid in various Indian languages with many of them going on to receive awards.

The story of Shakuntala emphasised the power of women or ‘Stree Shakti’ who were assertive, independent, sacred and noble. She asserted her right when she came to his court and declared that women were the equal half of men, his best friend in his journey of life and was the sacred ground where man was reborn as her own son. She demanded the respect that was due to her showing that since earlier Vedic times, women were always treated deferentially and with great respect. These vital characteristics in our epics are pointers to mankind to tread the right path of truth and righteousness transcending all lower passions to reach the ultimate goal of self realisation and bliss.