Indian mythology has always believed in the dictum ’Service to man is service to God’. The desire to do good is said to be the highest motive that man is born with and it is not the receiver that is blessed but the giver. The power of mercy and benevolence that man has been bestowed with should be considered a privilege and an honour and made use of in all aspects of life. There are numerous instances in the scriptures of such great charitable Kings like Karna, Mahabali, Rantideva and others who saw the Divine in man and never let an opportunity to help others pass them by. One such great King was King Shibi. 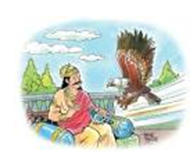 The story of King Shibi is mentioned in the Vana Parva of the Mahabharata in the Adhyayas 130 and 131. King Shibi was a King of the Chola dynasty and was well known for his charitable and generous disposition. Once, the Gods wished to test him. So Lord Indra took the form of a hawk and Lord Agni took the form of a dove. The dove was chased across the sky by the hungry hawk. Tired of flying in sheer exhaustion the dove reached the palace garden of King Shibi and fell at the great King’s feet. It begged the King to save it. The hawk reached the garden and told the King that it was its moral right to eat the dove as it was very hungry.

The King was in a dilemma. As a Kshatriya he had to protect anyone who asked for shelter but he could not take away the right of food of the hawk. He begged the hawk to spare the dove but the hawk refused to oblige. The King then stated that he would be prepared to do anything to save the dove’s life. 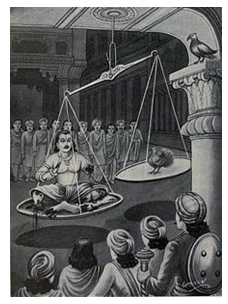 Finally the hawk asked the King to offer a portion of his flesh equal to the dove’s weight to satisfy its hunger. King Shibi immediately agreed and cut a portion of his thigh and weighed it in the balance against the dove. But the weight of the dove proved to be greater. Thereupon he cut more flesh from his body and weighed it in the balance. Still it was found to be less than the weight of the dove. Finally the King offered his whole body in the pan against the weight of the dove. As he was about to sacrifice his own life, both Indra and Agni assumed their original forms. They blessed him stating that his fame and generosity would always be remembered for centuries to come.

It is said that when the sacrifice was being made a single tear fell from the left eye of the King. The hawk immediately stated that it did not wish to accept an unwilling sacrifice. But the King’s face shone radiant with joy and he said that the left side was weeping as it was unable to participate in the sacrifice which only the right side was undergoing. Such was the greatness of King Shibi. King Shibi’s story is the story of duty, compassion and service. It emphasises the duty of a perfect King steeped in the values of Dharma.

All great saints make use of parables to highlight the importance of truth and human values. These simple stories from the scriptures inspire all generations to pursue a moral code of ethics in their day to day living and form the backbone towards building a strong moral and social fabric of the society.