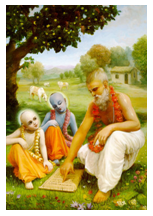 One of the most famous stories in the Bhagavatha Purana is that of the friendship between Sudama, a poor Brahmin boy and Lord Krishna reiterating Krishna’s claim in the Bhagavad Gita that it is not riches or power or strength that is dear to the Lord. Only devotion is the link that binds him to the devotee. Sudama was said to have been the great sage Narada reborn as a poor man as he wished to enjoy the transcendental leelas of Lord Krishna who was Lord Vishnu reborn on earth.

Sudama was a poor Brahmin boy whose parents were Matuka and Rocana Devi. Sudama and Krishna along with Balarama were students in Guru Sandipani’s ashram which was said to be located near Ujjain in Madhya Pradesh. Once, Krishna and Balarama went to the forest to bring fuel for the hermitage.  Later the Guru’s wife sent Sudama also to help them and fearing it would take a long time she gave him some grains as food to be shared by the three of them. After some time Sudama met them in the forest but refrained from mentioning that he had some food for them. Krishna getting tired lay down to rest and soon fell into a light nap. As Balarama was away Sudama took out the grains and began eating them. Krishna woke up and asked him what he was crunching. Sudama informed him that his teeth were chattering because it was cold. But the omniscient Lord knew he was lying and it is said that it was due to this failure to share a few food grains that made him suffer in abject poverty in his later life.

After their education they parted ways. Krishna married Rukmini, the Goddess of prosperity and became the King of Dwarka while Sudama married a poor Brahmin girl and led a simple and austere life. He and his wife had two children and the family faced a tough life with little food to eat and not many clothes to wear. Though Sudama’s wife was devoted to her husband she could not bear to see the children suffer. One cold night watching the children shivering without any blanket she approached her husband and requested him to go to his childhood friend Krishna and request him to alleviate their poverty. Reluctantly Sudama agreed though he informed her that he would go and meet Krishna but not ask him for anything. Overjoyed his wife agreed for she felt that even a visit to Lord Krishna would surely benefit her family.

Before Sudama’s departure he wondered how he would go to meet his childhood friend after such a long period empty handed. His wife then remembered that Krishna loved poha or flattened rice and rushing to her neighbour’s house she borrowed poha which she tied in a small bundle and handed it over to Sudama. Sudama then set out on his long journey to Dwaraka, the kingdom of Lord Krishna. 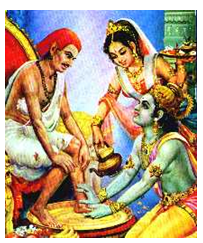 It is said that when Krishna heard that Sudama had come to meet him all the people in the palace were stunned to see Krishna rushing out to embrace a thin and poor Brahmin. Krishna and Rukmini then gave him a royal seat, bathed his tired legs with warm water and put sandalpaste on them. They offered him a royal meal and then began reminiscing about their life in the ashram of Guru Sandipani. When Krishna saw the bundle and lovingly asked what Sudama had brought for him Sudama was ashamed but Krishna lovingly took it from him saying that the richest of gifts given without love was useless in front of the poorest of gifts given with love.

Watching Krishna eating his humble offering with relish Sudama was amazed. His eyes filled with tears and he could not bring himself to ask anything for his family.

Next morning after he had rested well and shared all his time with Krishna, Sudama left for his home. His mind was peaceful and his heart joyful at the brief contact with his dear friend Krishna. The long journey home seemed very short as he recollected the joyful reunion.

Coming close to his home he could not recognise the beautiful mansion nor his wife and children who were dressed in new clothes and jewellery waiting to welcome him. He immediately realised that it was the compassion and benevolence of the all seeing Lord who had granted his unspoken wishes. He and his family bowed to the omniscient Lord. Sudama continued to live an austere life in love and contemplation of the Lord for the rest of his life.

The story of Krishna and Sudama reflects the Sakhya bhava of Nava Vidha Bhakti or the nine forms of devotion.  It glorifies the relationship between the Lord and his devotee as being pure and unsullied, real and non materialistic irrespective of class, caste or gender. The stories in Indian mythology bring out the moral virtues of truth, devotion, honesty and contentment and are a beacon of hope and light for future generations as they encourage mankind to follow on the path of knowledge and self realisation.