Sage Durvasa was the son of Sage Atri and Devi Anusuya and was said to be the incarnation of Lord Shiva. One version states that Lord Shiva felt that he had an uncontrollable temper and decided to deposit it into the womb of Devi Anusuya. Hence Durvasa was famous in Hindu mythology for his short temper and his very name implies ‘one who is difficult to live with’.

Though Durvasa was feared by all, he was extremely pleased if served well and always granted boons to all those who pleased him. When Kunti the mother of the Pandavas served him well once in her father’s house, the sage was pleased and taught her the Atharvaveda Mantras which enabled her to call upon gods to bless her with sons. This was how Kunti called upon Surya to get Karna, Lord Yama to be blessed with Yudhishtira, Vayu to beget Bhima, Indra to beget Arjuna and Ashwini Kumars to enable Madri to beget Nakula and Sahadeva. 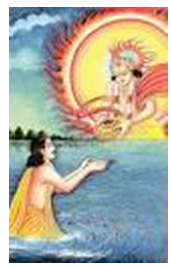 This story is mentioned in the Vana Parva or Book 3 of the Mahabharata on food and the power of faith. Once during the Pandavas exile, Durvasa and his disciples arrived at Hastinapur. Duryodhana and his brothers served them well. Highly pleased, the sage granted Duryodhana a boon. Duryodhana wished to make trouble for his cousins the Pandavas who were in exile in the forest and hence requested Durvasa and his entourage to pay a visit to them deliberately timing it to ensure that Draupadi would have finished her meal. The Pandavas during their exile obtained their food from the ‘Akshaya Patra’ which was a Divine Vessel bestowed on Yudhisthira by Lord Surya to ensure that  they never go hungry during their exile the only stipulation being that the vessel would become exhausted each day after Draupadi finished her meal. 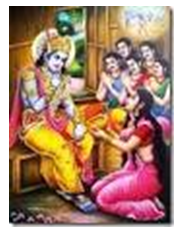 As requested by Duryodhana, Durvasa visited the Pandavas in the forest. The Pandavas were anxious as they did not know how to offer meals to the sage as Draupadi had already finished her meal and washed the Akshaya Patra and to stall for time they asked Durvasa and the others to bathe in the river and then return for the meal. Draupadi then began fervently praying to Lord Krishna. Lord Krishna then appeared before them and asked Draupadi for food as he was extremely hungry. Draupadi was exasperated and informed Krishna that she had prayed to be alleviated from exactly such a problem. Krishna reassured her and asked her to bring the Akshaya Patra. Puzzled Draupadi followed his request and Krishna found a piece of grain sticking to the vessel. He immediately partook of it and patting his stomach announced that he was satisfied with his meal. This in turn satiated the hunger of Durvasa and his entourage for the satisfaction of Krishna the Supreme Being meant satisfying the hunger of all living beings. They quietly left the place after their bath as they feared the wrath of the Pandavas if they declined their hospitality of partaking meals. Thus the Lord saved the honour of the Pandavas and they escaped the wrath of Durvasa.

This story gives a powerful message on the power of faith and prayer and the value of even one grain of rice. Thus one should value everything in life and never undermine or waste food and should consume only as much as is needed. This story indicates food and its importance in Hindu mythology and culture.