The beautiful story of Ganesha in Hindu mythology is reverence to one’s parents and has been retold for aeons to impress upon the younger generation the importance of moral principles and right living. 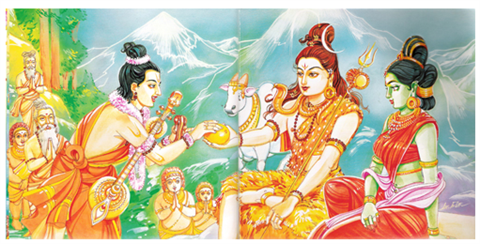 Lord Shiva and Goddess Parvati lived on Mount Kailas with their children Ganesha and Kartikeya. Both children were brave, caring and dutiful and were loved by all. Kartikeya was a handsome boy with strong limbs while Ganesha had a pot bellied body with short, stubby legs and the head of an elephant. Kartikeya had the swift peacock as his vehicle while Ganesha’s vehicle was a mouse. Once, Sage Narada came to Mount Kailas to pay his respect to Lord Shiva and Goddess Parvati. He also wished to test the brothers to find out who was the more intelligent of the two. He presented a beautiful mango to them. Extolling the beautiful golden fruit he said that his father Lord Brahma had given it to him and it had extraordinary powers. So he felt that Lord Shiva would be more worthy of the fruit and hence had brought it to him. Lord Shiva smiled and offered it to Parvati who said that as she had merged herself into her husband she had no greater need so they should gift it to their children. When Ganesha and Kartikeya saw the mango both of them rushed to claim it but Narada informed them that it had special powers and could not be shared. In order to solve the problem he proposed a test and the winner could claim the fruit. Addressing the sons he said that the one who went around the three worlds of heaven, earth and nether world and returned first would be declared the winner and would get the fruit.

The race began and Kartikeya got onto his vehicle the peacock and without wasting even a second sped off into the skies. Meanwhile Ganesha’s vehicle the mouse got ready to depart. But Ganesha was lost in thought. He realised that Lord Shiva was the ruler of the universe and Parvati represented his power. Since everything originated from them it was not necessary to go around the three worlds. So saying he bowed before his parents and circumambulated them. 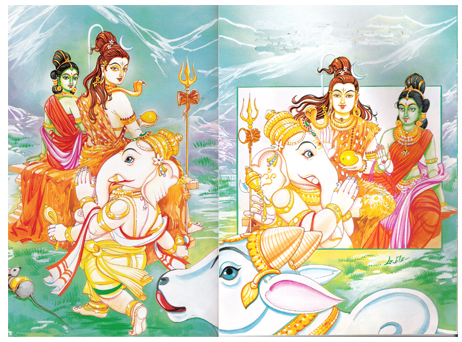 Pleased with his intelligence Narada along with Lord Shiva and Parvati blessed him and rewarded him with the fruit. It is said that such was Ganesha’s love and humility that when his brother returned Ganesha offered the mango to him.

Lord Ganesha’s vehicle was much slower and actually he could never have been able to defeat Kartikeya. His infinite wisdom and intelligence have always been praised in the scriptures. The deep inner meaning of this story is that eternal wisdom (mango) can be realised only when one’s mind is fixed on the truth (Shiva and Parvati). The mind focused on the outer world (Kartikeya) is incapable of realising the truth. Only a mind filled with devotion and turned inward (Ganesha) can attain the highest wisdom.