Among the mythology stories on food one of the most famous ones is the story of the birth of Lord Rama. The King of Lanka Ravana was a great devotee of Shiva and a learned scholar. He was said to have been one of the gatekeepers of Lord Vishnu Jaya and Vijaya who were reborn on earth after a curse. When they begged for forgiveness they were given a choice of being born seven times on earth as ordinary devotees and mortals or three times as powerful enemies of Vishnu. They chose the latter and were born as Hiranyaksha and Hiranyakasipu in Satya Yuga, as Ravana and Kumbhakarna in Treta Yuga and as Dantavakra and Sishupala in Dwapara Yuga. In all these Yugas they were slain by Lord Vishnu in various Avatars.

Ravana had received a boon from Lord Brahma after performing severe austerities that no God, demon, Gandharva or demigod could kill him. Thus he became all powerful and overpowered the Devas and ruled the earth, heavens and the nether world. Fearing his arrogance and supremacy the Gods all approached Lord Brahma for deliverance. All of them went to Lord Vishnu who assured them that he would be born on earth as a man and destroy Ravana thus establishing peace and righteousness on earth. 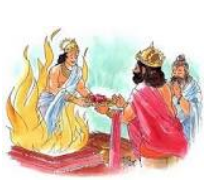 Dasharatha was the King of Ayodhya and a descendent of the Ikshvaku dynasty. Though he had three queens Kaushalya, Sumitra and Kaikeyi he was childless. His Guru, Sage Vasishta advised him to perform the Putrakameshti Yagna. Being a very difficult yagna Sage Rishyasringa was invited to perform the yagna due to his power of penances and purity. At the final stage of the yagna Lord Agni appeared and gave a bowl of Kheer (Payasam) to the King which was to be partaken by the three queens. 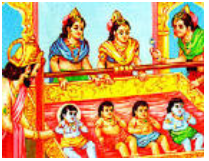 It is said that Dasharatha divided the kheer equally and distributed it to his three queens. All the queens went to their royal chambers to bathe and purify themselves before partaking the divine gift. Sumitra’s bowl was said to be carried away by a bird while she was drying her hair on the terrace after bath. In fear she went to inform the other queens of her predicament. All the three queens loved each other as sisters and gave her a share of their payasam. This was the reason for Sumitra begetting two sons Lakshmana and Shatrughana while Kaushalya gave birth to Rama and Kaikeyi gave birth to Bharata. As Sumitra’s potion was a share of the other two queens it explains the proximity and attachment between Rama and Lakshmana and Bharata and Shatrughana as they were actually two parts of a whole.

Lord Rama was the seventh incarnation of Lord Vishnu and was born mainly for the purpose of the destruction of Ravana and re-establishing Dharma. He stands as the symbol of truth and morality and as an epitome of the Ideal son, Ideal husband and an Ideal King.

There are numerous stories, relating to food, which have been passed on through generations in Hindu mythology. These stories emphasise on moral values and right living in order to help people live a Dharmic way of life and pave the way for a healthy and spiritually unifying society built on the pillars of truth and righteousness.

References
Published On: 18-11-2014
(Others):
1. wikipedia.com
2. books.google.co.in
3. sacred-texts.com
4. hindumythologyforgennext.blogspot.in
5. Indianmythology.com
2019-01-19
Previous Post: The Divine Fruit
Next Post: The Feast of Kubera