The Feast of Kubera

Kubera was the God of wealth and was said to be the treasurer of the Gods and the Overlord of Yakshas, Kinnaras, Gandharvas etc. His beautiful palace and magnificent court was said to have been graced by all Gods and has been vividly extolled in the Hindu scriptures.

The feast of Kubera

Once, Kubera decided to hold an extravagant feast for all the Gods in order to show them the extent of his wealth and influence. His arrogance and pride had reached such a pinnacle that to further enhance his prestige he wished to arrange it in a way that had never been witnessed by the Gods before. Since it was Lord Shiva who had granted him the boon of ever increasing wealth which would never diminish, Kubera decided to go to Mount Kailas and invite Lord Shiva and his consort Parvati personally. On entering the humble abode he was proud that his abode was so much grander and beautiful than even the great God Shiva.

Lord Shiva and Parvati could divine Kubera’s thoughts and decided to teach him a lesson. Lord Shiva refused the invitation and said that he would send his son Ganesha in his stead.  A huge hall was constructed specially for the purpose of accommodating the hundreds of Gods and other guests who had been invited. Ganesha was the last to arrive and the moment he entered declared that he was hungry. Kubera offered him the seat of honour and smirked inwardly thinking that the little elephant boy would not be able to savour much of the food prepared. Kubera then

called for the first set of dishes but no sooner were they placed in front of Ganesha he gobbled them all. He was then given a second helping but the same thing happened. This went on for some time and Kubera ordered his cooks to prepare more food but to no avail. No sooner were they prepared they were eaten up by Ganesha and the cooks were unable to keep up with his frenzy. He then rushed to the kitchen and devoured all the dishes kept there demanding more and more food. Kubera was astonished and began to get frightened. Ganesha then reprimanded him about the tardy feast as his hunger had not yet abated. All the other guests were waiting to be fed as Ganesha had consumed food meant for thousands and instead of enhancing his prestige the event had made Kubera a laughing stock. Kubera rushed to Lord Shiva and Parvati and fell at their feet. He confessed that he did not know how to satisfy Ganesha’s hunger. 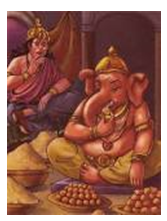 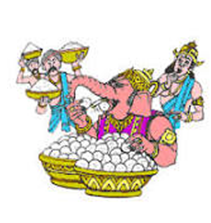 Goddess Parvati then smiled and told him that it was to humble his arrogance and pride that Ganesha had been teaching him a lesson. She gave Kubera a few grains of rice and asked him to offer it to Ganesha. Meanwhile Ganesha had returned home and was bitterly complaining to his father that his hunger had not been appeased. Kubera approached him with humility and reverence and offered him the few grains of rice. Ganesha accepted it and after consuming it declared his hunger as appeased. Lord Kubera was relieved and learnt a bitter lesson.

The Bhagavad Gita states ‘He who offers to Me a flower, fruit, leaf or water with love and devotion is dear to Me’ implying that it is the intention or feeling behind the action that matters and not the action itself. Hindu mythology is replete with such stories which teach moral values and have been a source of inspiration to all from time immemorial.