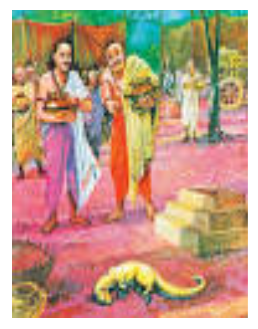 On completion of the Kurukshetra war in the Mahabharata, Yudhisthira was crowned the King of Hastinapur. He wished to perform a yagna for the well being of his subjects. The yagna was conducted in a grand manner with expensive and precious gifts given away to all the subjects. Everyone in the Kingdom felt that it was one of the grandest yagnas ever witnessed. As people were praising the yagna and their King Yudhisthira they saw a small mongoose which had a strange body. One side of it looked normal like any other mongoose but the other side of it gleamed like pure gold. They saw it rolling on the floor and repeatedly looking at its body as if it expected some change to occur but nothing happened. Everyone was stunned when the mongoose spoke and then looked at Yudhisthira and the people and said that there was nothing impressive about this yagna and it was merely a show and nothing else. Hearing the mongoose’s words Yudhisthira was pained and wondered why it should be so when he had so painstakingly followed the rules of the yagna and given away charity to the poor and needy. The mongoose then addressed everyone and said that it would relate a story and they could decide for themselves.

Once upon a time long ago in a small village lived a poor man with his wife, son and daughter in law. Though they were extremely poor and lived a hand to mouth existence they were pious in nature and bore all vicissitudes of life with patience and equanimity. Once, a great famine struck the village. Being already poor the family suffered greatly. The man went out and managed to procure a little rice with great difficulty. His wife and daughter in law cooked the food and divided it into four portions one for each of them. As they sat down to eat they heard a knock at their door. Opening it they found a weary traveller half dead with fatigue and hunger. Immediately welcoming the man inside and allowing him to wash and rest the man without any hesitation offered the traveller his share of food. But after eating, his hunger seemed unappeased. His wife then came forward and offered her share of the meal. Her husband was reluctant but she said that she could not eat while her husband was starving. When the traveller still remained hungry his son said that it was the duty of the son to fulfil the wishes of his parents and gladly gave away his portion. Finally the daughter in law too gave away her portion of food saying that she too wanted to take part in this great sacrifice that all her family members were participating in. While the mongoose was relating the story a great hush fell over the assembly hall of King Yudhisthira. The mongoose continued the story and said that suddenly there was a brilliant light and the Gods who had come in the guise of the traveller appeared before the poor family and blessed all of them granting them liberation saying that they had performed the greatest Yagna of all. The mongoose which had been passing by the house looking for food accidentally fell on some scrap of food which had remained on the floor after being offered to the traveller.  It was amazed to find that side of the body turned to gold. Since there was no more food left the mongoose said that it has been wandering to all yagnas in the hope that there would be another such great yagna where the other side of the body too could be transformed into gold. It even tried the same thing in King Yudhisthira’s yagna but was disappointed with the results. Thus it concluded that Yudhisthira’s yagna could not have been as great as that of the poor man and his family. Saying this, the mongoose vanished from the scene. The mongoose was actually Lord Dharma who had been cursed in an earlier birth and could regain his original form only if he humbled a person who was an embodiment of Dharma.

Yudhisthira realised that not all the riches and wealth given away in sacrifice could compensate for purity of heart and selflessness. Though an embodiment of Dharma himself he realised that one has to always be vigilant against the passions of pride, power etc which could cause the downfall of even the most virtuous of men.

The story of the mongoose is a beautiful story in Indian mythology and folklore which emphasises that it is the quality of feeling that is important and not the quantity that is of great importance in life. The moral lessons of life can be learned even from the humble birds and beasts and not always only from realised saints and sages. One only needs a discerning eye and a humble disposition to attain this supreme knowledge.